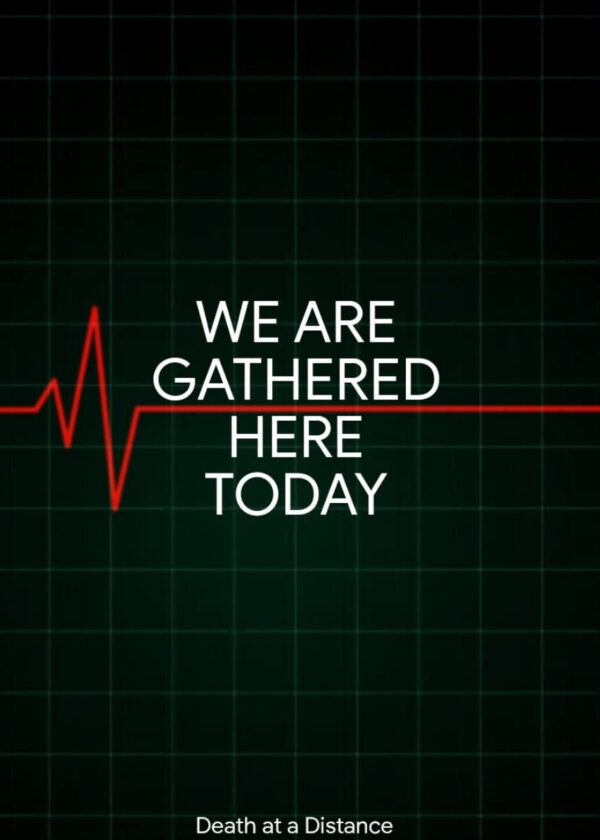 We Are Gathered Here Today

The filmmakers of this film are to be given credit for trying something new and unique. Based on the pandemic and Covid-19 and the millions affected worldwide, it deals with the sad and tragic story of a family that cannot say good-bye to their loved one in person. They must do so by video conferencing. Most of the movie shows the various characters interacting on video screens, talking to one another. There is a lot of angst and anger that some of them will unleash during the conferencing.

The movie opens with various statements, including that Covid-19 has killed millions worldwide, and in the U.S. alone, more people died in one year than were killed in World War 1, World War 2, and the Vietnam war combined. And, due to hospital protocols, anyone who was not a patient could not enter a hospital room. Patients who succumbed to his horrible disease did so without a family member or loved one present.

DaJuan Johnson plays the physician who must explain to Peter Stone (Danny Huston), who is in the U.K., that he cannot fly back to visit his father personally, even though they will be taking his dad off the ventilator. The doctor explains that his father, Henry, has virtually no chance of survival and they need the ventilator for others who have a chance to survive. Needless to say, this doesn’t go over well with Peter, who can’t fathom this tragic turn of events. It should be noted that Johnson plays the doctor very well, as a practical yet compassionate physician.

Peter has the job of contacting others, including his ex-wife, Nancy, and other family members, including his son Max and grandson Ben. He also contacts his wife, Faye, and other friends and relatives, to set up a video conferencing time. Some of the attitudes that come out include comments that Henry should have worn a mask, and why did he insist on playing tennis every day, and why did he allow himself to be exposed to others?

Another factor in the family drama is a minister, who will want to comfort the family and pray, but Peter is not very tolerant of many comments about God. Another dramatic element is granddaughter Keke, who has not been in touch much with the family, and who announces she has a girlfriend now, not a boyfriend. The stress causes various family members and friends to argue with one another on the video screen, to cry out to God, to weep, and to become angry. One person offers up a toast to the dying Henry.

Peter unleashes a few strong comments but then retracts them and asks the video panel to forgive him, and he receives the reply from a friend, “You’re forgiven, buddy.” The movie does a good job in showing the stress on people who had to say good-bye to loved ones in this overwhelming and painful method. Not being able to physically hold a hand or touch the loved one obviously took grief to the next level.

However, despite the unique and relevant topic, the movie features a lot of strong language, including the Lord’s name taken in vain. It also features an innuendo of a boyfriend asking his girlfriend if she’s “ready for round two?” Due to the strong language, we are prevented from awarding the film our Dove seal as a family friendly film.

This movie presents a plausible and unique situation due to the pandemic, but its strong language places it outside the perimeters of our family friendly films.

A man mentions Jesus, quotes scripture, and prays for the dying man.

An innuendo that an unmarried couple has had sex; a girl tells her family she has a girlfriend.

None but a lot of anger is unleashed.

A man toasts a dying man with a drink.

Arguments and tension between various characters; death and grief; comments about police brutality and violent demonstrations.