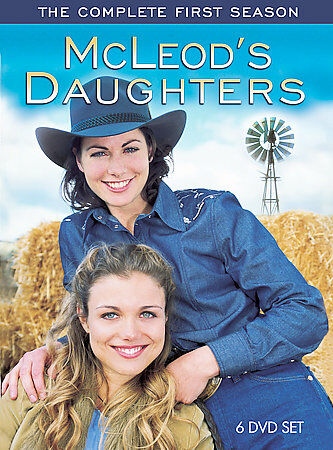 Try on an Australian cowgirl story for a change of pace! Filmed in southern Australia and starring Lisa Chappell as Claire McLeod and Bridie Carter as her sister Tess, the drama and angst unfolds in this story about the two sisters who have been estranged for many years. In this episode, the death of their father Jack has brought them back together, as Tess has been left half of the ranch and property.

Tess left suddenly years before and hasn’t been back since, and Claire is holding a lot of hurt and bitterness inside. She has been running the ranch since Jack died, and Tess feels the awkward welcome when she returns home. The two sisters will have to navigate through their feelings of loss and betrayal, and the fact that any decision on the ranch will have to be agreed upon by the two of them. Will Tess want to sell or stay?

The episode, running approximately 45 minutes, contains scenic beauty of green grass and the herd, not to mention the beautiful ranch. Claire is not afraid to speak up when necessary, telling one of the workers, “I’m the boss now!” The price of beef is up for the moment but then Tess forgets to lock a gate and a few of the cattle escape. While searching for them a worker named Ian accidentally hits a few of them with his jeep. Claire has to put one cow down, shooting it (the sound is heard, this is not shown on screen). Claire is given another problem to deal with when Tess discovers that someone has been stealing their fuel.

Despite her feelings of bitterness, Claire finds herself looking at an old photo of herself and Tess as girls, and the tears begin to fall. She has a hard time admitting it, but she’s glad her sister is in her life again. But there are a few comic moments for relief from the drama. In one scene Tess says, “There’s a gecko in my room. I have nothing personal against him but I don’t want him there.”

The story leads to a confrontation between Claire and some of her employees and some heart-to-heart talks between Claire and Tess. The episode contains some mild language and a couple of innuendos but overall is light on content concerns. Therefore, it has earned our Dove seal for Ages 12+.

This episode gives you a flavor of living in Australia and features solid acting and drama.

Tension between characters; death and dealing with it; tears shed because of remembering a past relationship.

An innuendo of, “You’ve got the time, I’ve got the equipment,” and a woman flashes some guys by removing her top, but it is shown from behind and not seen.

A man looks down at his jeep radio for a few seconds and hits some cows crossing the road; the jeep is wrecked and catches on fire but the driver is okay; a woman puts down a cow by shooting it but it is heard and not seen.

The mention of having a few beers.

Tension between characters; death and dealing with it; tears shed because of remembering a past relationship.