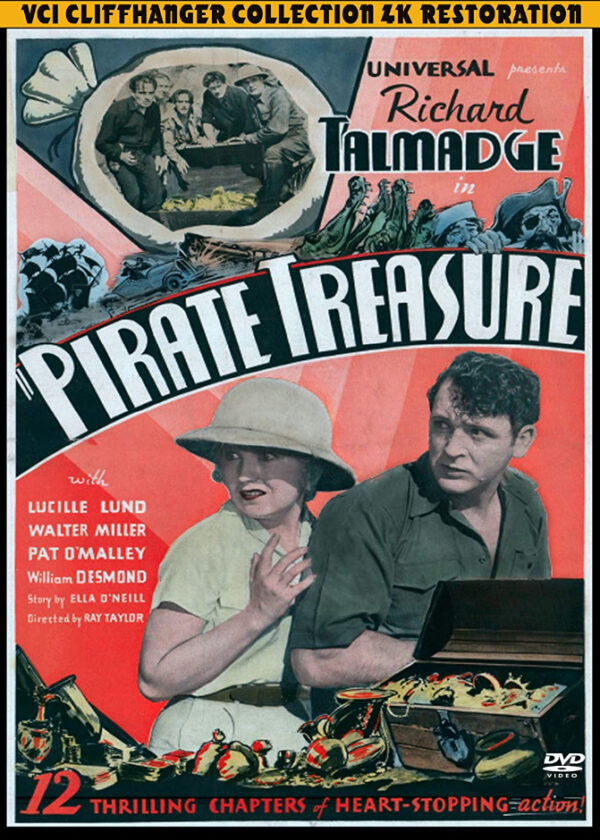 A young man looking for buried treasure on a tropical island fights against thieves trying to steal his map, and then his treasure.

In this pilot episode of Pirate Treasure, Dick Moreland (Richard Talmadge), nephew of wealthy mogul Robert Moreland (Del Lawrence), is being cheered by hundreds of fans, having just won an around-the-world flight race. Exhausted? Hardly. Instead, the intrepid pilot jumps out of the cockpit, looking dapper in his clean suit and tie, and proceeds to dash along the right wing, cannonballing into his friends’ car below. (Note: Talmadge did much of his stunt work.)  After a boisterous greeting, Moreland and friends join a ticker tape parade before returning to Aero Club, a pilot’s social club.

Now that Moreland has his club buds around him, he unveils his greater ambition- to conduct an expedition, exploring for pirate treasure.  Family legend has it that “Sir John” is an ancestor of the Morelands, and a swash-buckling, treasure-hiding pirate as well! (Not sure how a pirate parades the “Sir” banner though.)  Nevertheless, Moreland’s uncle keeps a parchment with an illustrative treasure map, hidden in a safe. A new member to the club, attorney Stanley Brasset (Walter Miller), hears this and decides to do some treasure hunting of his own, sending his boys to heist the map.

In the meantime, Moreland has come home to his uncle’s estate, and after studying the secret map, crashes on the couch.  He sleeps lightly enough that he awakens in fighting mode when Brasset’s boys pick the map. What follows would be suspenseful action in 1934, complete with car chase, fist fights and jump stunts. The film ends with Moreland’s car flying over the edge into the ocean, and a black screen reading, “Chapter Two of Pirate Treasure serial to be shown at this theatre next week.”

Pirate Treasure delivers action and stunts, and introduces us to the 1934 Pirate Treasure serial.  Being a studio production (Universal Pictures), a bigger budget sent cars flying and stunters running down the wing of a moving plane, in this case, Talmadge himself.  Ironically, it’s rather suspenseful for us as we watch, knowing these stunts are the real thing, not computer generated images. I didn’t see the waiver, “No stuntmen harmed in the filming of this movie.”

Because this film was a studio film, it afforded experienced actors and diverse locations.  Some director’s choices are not the best, and continuity problems should have been addressed, but again it was 1934, looking forward to Citizen Kane. Other than fistfights, it contains no objectionable elements. Dove awards Pirate Treasure the All Ages Seal of Approval.

Released in 1934 by Universal Pictures, Pirate Treasure is the first in a series of short adventure films, and boasts some good ol’ swashbuckling along with authentic jump stunts.

Man pretends to be a trusted club member of the main character in order to access a secret pirate map.

Production quality is what can be expected from a 1934 film.