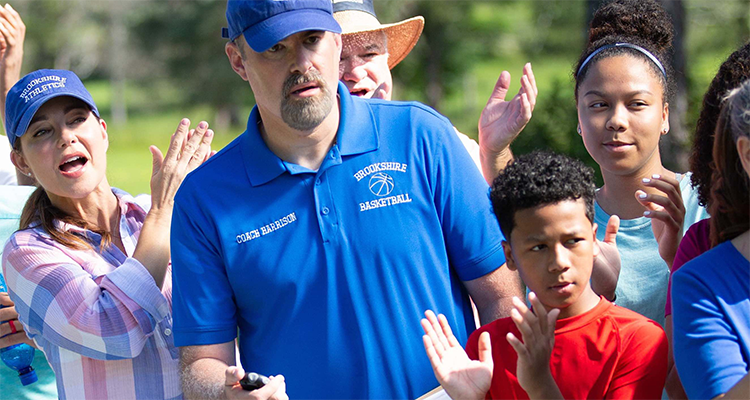 Every time a Kendrick Brothers film finishes its theatrical run, Alex and Stephen Kendrick spend time in prayer, asking God what they should do next. With myriad ideas, the two explore separately and together what their next project might look like, with God’s nudges pushing them in the direction they feel called to go. Whether it’s through Scripture or a sudden waking in the middle of the night, the two have grown together from 2003’s Flywheel into a team that has delivered some of the best-received Christian films of all time, like Facing the Giants, Courageous, and War Room. Now, with Overcomer, Alex is starring in a story about a coach who finds himself without a team, and unsure of his identity, as identity in Christ became the focal point of the Kendricks’ reflections.

“Our culture is in an ongoing debate about what determines our identity,” Alex shared from their offices in Georgia. “Is it our feelings? Our circumstances? Our title? A man tends to put his identity in his work but then he flails around when it’s stripped away by losing his job or retirement.”

As the brothers grew closer to focusing on self-identity, Alex found himself asking where his identity came from. “God was asking me, ‘If you never make another movie, who are you?’” he remembered. “I wrestled with that, and it became clear that my identity has to be in the unchanging character of Jesus Christ. If filmmaking doesn’t work out, I still know who I am, but I have to have my identity in the right order.”

Kendrick’s character, basketball coach and history teacher John Harrison, has his identity in the wrong order, and his depression, anger, and sadness over losing his basketball team thanks to financial struggles overwhelms him. The Kendricks focused on Ephesians, and the way that the epistle shows first that it’s who we are and then how we are supposed to live, as Stephen confirmed that God was calling him to focus on his self-identity in Christ as well.

As the theological element became realized, Alex reflected on his six children, who all ran cross country with great success but who all hated it! The parallel the apostle Paul uses to running the race of faith to that of actually running became a metaphor the brothers focused on in Overcomer. John Harrison’s race, his wife Amy’s race, their sons’ races, a young student named Hannah’s race – all of these are intertwined in what it meant for people to run their own race of faith, but they’re all wrapped around the love John and Amy have for each other.

In one crucial scene, John has lost his temper, pouring out his anger and frustration at his mounting losses on Amy. But the response Amy gives him is significantly different than you might expect in real life, or from a Christian film. “Amy could have played the ‘you owe me an apology’ card, but she doesn’t,” Kendrick explained. “She says, ‘I know you’re struggling, but I love you and I believe in you.’”

“It’s so hard to play the love card in the midst of situations like that, and not play the rebuke card. We play her approach up humorously, but she affirms him and it breaks him. It’s a common situation for couples but we showed it with a twist. It’s what Jesus does for us again and again, showing us compassion and mercy.”

To see the Kendricks’ films now, and to hear Alex evaluate them, it is clear the growth in their story as they’ve been telling stories cinematically for more than fifteen years. Alex admitted to struggling with watching their early work, now, even as they began making films because they believed they could do better than the films they grew up seeing in church. But delivering them yourself has proven to be a huge learning curve.

“I remember watching some of those movies and asking, ‘Is this the best we’ve got?’” he recalled. “Looking back, I see the cheesiness, and I know we’re trying to cut back on that. But it’s easy to play armchair quarterback and looking back, I recognize that you need some humility of your own when you set out to do it yourself. Yes, God used those early efforts but they could have been better.”

Now, the Kendricks continue to focus on honing their storytelling, on creating more effective ways of conveying the same messages around God’s love and grace. They keep pushing for better production values, and for deepening the storytelling. Still, Alex recognizes that “we can make a movie but only God can change a heart. We’re grateful for whatever fruit God provides from our moviemaking.”

As the Kendricks keep growing, so do their efforts. It is clear that people’s hearts are being changed, as God uses their gifts and passion to reach people, and remind them about who they are.

Overcomer is in theaters on August 23.