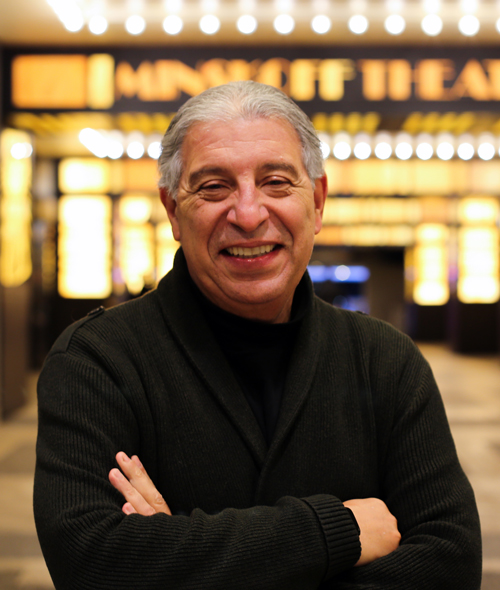 As a Spanish-speaking four-year-old, Max McLean admits he was “highly motivated” to learn English, as his American soldier stepfather and his mother moved the family to New York City. While they met at the movie theater where his mother took tickets, McLean says that his earliest film memory, a bullfighting movie, left him traumatized, and it’s the stage that drew him into acting. Now, settling in to tell his story from his apartment a mere ten minutes from the passenger ship terminal where he immigrated into America, the storyteller shares openly about his love for C.S. Lewis, and the origins of The Most Reluctant Convert: The Untold Story of C.S. Lewis, a one-night only event on November 3.

In college, McLean had written reviews of plays for an English class, Drama as Literature, but the acting bug didn’t hit until his senior year in college. It was later, when he converted to Christianity at twenty-three, that a girlfriend handed him a copy of Surprised by Joy, because he was a new Christian. While he appreciated the gesture, he says Lewis “blew past me like a freight train.” When the same girlfriend gave him a copy of The Screwtape Letters, he related immediately.

“For a long time, I loved hearing his quotes, but we had an ‘arms length relationship,’” explains McLean. “He was always someone who I wanted to get to know better.”

Twenty years ago, McLean’s theater company, Fellowship for Performing Arts, was doing Christian worldview theatrics and a Drew University professor encouraged McLean to adapt The Screwtape Letters for the stage. McLean admits, “I didn’t see the work as theatrical but he had an idea. I said, ‘If we can get the rights, we’ll have a go,’ and we did. If you’re going to adapt from page to stage, you really have to dig into the material.”

The company would go on to perform both Screwtape and The Great Divorce, both books about spiritual warfare where Lewis references his own conversion. “Both books are largely fictional versions of his autobiography, being transparent about his own psychological and emotional shape,” explains the playwright. “He is super aware of spiritual forces, principalities as Scripture calls them, bringing them into everyday moments.”

For director Norman Stone’s cinematic adaptation, McLean initially thought they would be working toward a 2022-23 project but the pandemic sped up the timeline. Britain allowed for filming in August 2020 and Stone gathered the crew, scouted locations, and received the rights to the film. On August 31, McLean boarded a plane “as big as Air Force One but with fewer people,” crossed the Atlantic, and quarantined for a few weeks. Over six weeks, the team shot all of the scenes, and the actor acknowledges that it felt “rather miraculous” what they accomplished.
Now, McLean is excited by what audiences will see of Lewis, and his story. He, like Lewis, wants the story to make a difference not just in entertainment, but also in faith. “In Convert, Lewis is looking for meaning. He’s looking for some level of high responsibility that’s driving him forward. He calls it joy. It’s the central experience of his conversion. He wants us to see that there is another world. Narnia is a representation of another world.“

“He’s asking, Is this the only world that exists? Because purpose and meaning are hard to justify.’ Lewis doesn’t feel that life is that simple. He talks about going further up, further in. At the end of his life, he was ready to go there. He felt like this was what he could give – to help people discover what that other country was.”

If audiences experience a slice of heaven on November 3, then Lewis, and McLean, will have accomplished what they set out to do.