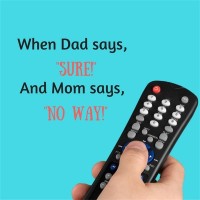 When our son was in elementary school, I walked down to the basement to find him snuggled on the couch next to Daddy, watching a war movie. “What are you doing?” I asked my husband in exasperated tones, “He’ll have nightmares for weeks!”

My husband disagreed. Since it was a Civil War movie, he argued that there was educational value. Plus, kids our son’s age were watching battles in their own communities. Snatching the remote from my husband’s hand, I said, “Well, if we had a war in our town, I’d be focused on protecting our kids; not entertaining them with it!”

It’s normal for one parent to be more protective than the other.

Ten years later, my husband and my roles still haven’t changed—he still says, “Sure” and I say, “No way—but my perspective on parenting has grown.

As parents even if we completely disagree on what our kids should be allowed to do, we still need to operate as a united force. How do we do it? Here are three guidelines that help, when parents disagree on parenting choices:

Two parents who both love the same set of kids can provide a checks and balance system to parenting. We’re probably both more right together than we are on our own. So it’s okay that we disagree, as long as we’re willing to work toward a decision that we mutually agree upon.

I meet many wives who complain that their husbands are too passive. But often times, these same wives are the ones who admit that they have control issues. When a wife marches in and clicks off the TV in the middle of whatever movie Dad just rented for the kids, it doesn’t invite his future input. And when a husband brushes off his wife’s concerns and takes his teens to see the rated R movie she was protesting, it doesn’t invite her input, either.

Husbands and wives, we are better together. If our kids are blessed with two capable, loving parents, this is to their advantage! We should invite input, rather than veto each other without discussion.

Without respect, a parenting discussion (which should happen privately, by the way)  is sure to go sideways—especially over something as emotionally charged as protecting our kids. Respect is displayed through tone of voice, letting the other person finish a thought, and truly listening.

Validate that your spouse loves your kids as much as you do. Admit that you might be too lenient or too protective. Talk about how to compromise. And respect your spouse enough to stick with whatever you agreed upon.

We probably won’t get every decision right, as parents. But we’ll do a far better job of parenting in a balanced, thoughtful way if we do it with a partner.

Comments? Questions? Leave them here. We’d love to hear from you.