These statements about Netflix’s Marriage Story make my head shake. Yes, it’s a well crafted film in writing, acting, directing. But why is this story an excellent movie experience? I’m still unsure of the actual message.

True, many of the portrayals in the film are heartbreakingly true. Lawyers unilaterally destroyed what might have been a very different outcome. Is that the only point? It’s hard to fathom why Laura Dern was awarded the Golden Globe for portraying a cliche, anorexic, conniving LA lawyer. Was that difficult for her? I dare say it wouldn’t be difficult for any of us. It’s a caricature, for heaven’s sake.

But even beyond the lawyers, the story is about selfishness at it’s core, like many divorces are. Mine was. Are we glorifying this film because it makes us see the pain and therefore makes us want to stay married and battle our demons? Perhaps.

This story seems more like Hollywood talking to and rationalizing itself, 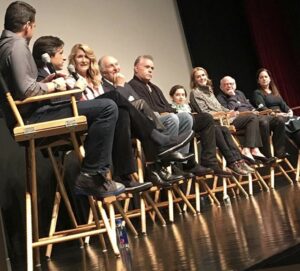 elevating the self-absorbed ego as the ultimate truth – the “burden” we all must bear.

The movie [I don’t even want to use the title in this sentence] is so painful to watch – perhaps because I’m particularly sensitive and perhaps because it is well made.  In my second half of life I am now aware of the undeniable power of marriages. Marriage is a super-power, and this movie sidelines that miraculous power in favor an individual ego that leads us nowhere great. Ever.

Isn’t this the same as LaLa Land without the magnificent design and choreography? Except I loved La La Land (at least the first half of it). Call me romantic.

Within the Marriage Story film, I struggle with how we are steered to sympathize with one side or the other. Did the creators of this film make Adam Driver’s character less offensive because he was a thriving and driven theater director? Does the writer denigrate Johannsen’s “Nicole” because she wanted to have a successful career distinct from her husband? Did she have to divorce him and find a weaker, less dynamic man so that she could become a director? Is that the victory that we celebrate in the end?

Great marriages deliberately, intentionally lift up the other. Two people who’s central passion is to celebrate their partner and bring out their God-created best self over a long journey of knowing and loving and committing. Let’s celebrate that truth and share it with the world.

NOTE: For the record, in addition to the damaging storyline, the language and sexual content make this film Not Dove Approved.