Frank Herbert’s Dune is massive, sprawling, ambitious even. It’s also beautiful, terrible, confusing, and stunning. That’s trying to read the seven-hundred-page book, without even engaging in the visuals that 1984 original film rolled out. Nearly thirty years later, director Denis Villeneuve set out to tell the story on screen where David Lynch failed, making an “unfilmable” story cinematic, like those who took the stories of George R.R. Martin and made the visuals possible for Game of Thrones. While not as dark, the 2021 version of Dune is visually that challenging, and the end result will tug on the corners of your mind for hours, even days, after watching it.

Unlike Kyle MacLachlan, Timothée Chalamet has previous notable roles, like The King, Beautiful Boy, and Lady Bird, potentially giving him more range in the role as Paul Atreides, the descendant next in line for one of the universe’s ruling houses, that of House Atreides. He accompanies his father, Leto (Oscar Isaac), to rule over the planet Arrakis, a planet rich with “spice,” a resource that allows for interstellar travel and impacts humanity’s way of life. Arrakis has been passed from House Harkonnen to Atreides, but it’s actually all part of the Emperor’s plan to ruin Atreides. And one can’t overlook Leto’s partner and Paul’s mother, Lady Jessica (Rebecca Ferguson), who has (heretically) raised her son in the Bene Gesserit, a female-only group who have fine-tuned their mental and physical powers to the point of super-heroic feats. 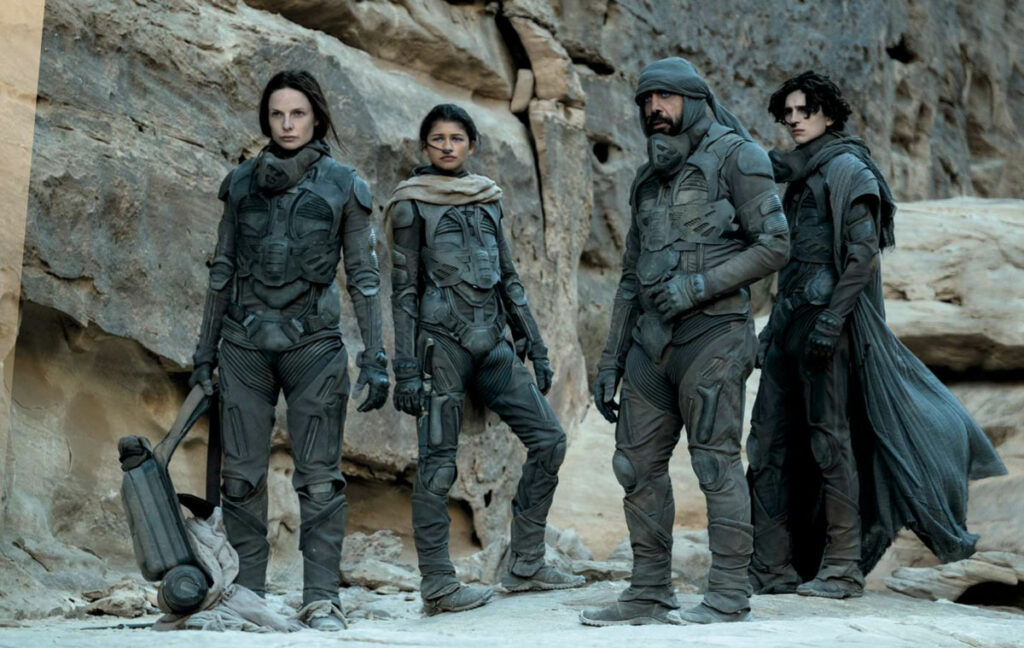 Paul’s mentors, Gurney Halleck (Josh Brolin) and Duncan Idaho (Jason Momoa), provide the last two elements of direction in his life, but they are soldiers not politicians. While Villeneuve doesn’t steer away from the hand-to-hand combat relevant to the storyline, this is much less physical than one might expect of a twenty-first century science fiction epic. It’s more intellectual, metaphysical, more spiritual than you’d expect. Yes, there are giant sandworms and cool space-age flights, but this is about heart and soul.

Devastating the soul of all but the bravest on Arrakis, the scalding hot sands and absolutely arid conditions wreak havoc on all life. Like Mad Max: Fury Road, there’s a need for water, no, moisture, that causes everything to dry out, including the brown and washed-out visuals of this cinematic enterprise. When fire burns red, it splashes color back into the world, like a spark of passion or imagination breaking free into a world where rules are followed and commands must be obeyed on penalty of death. 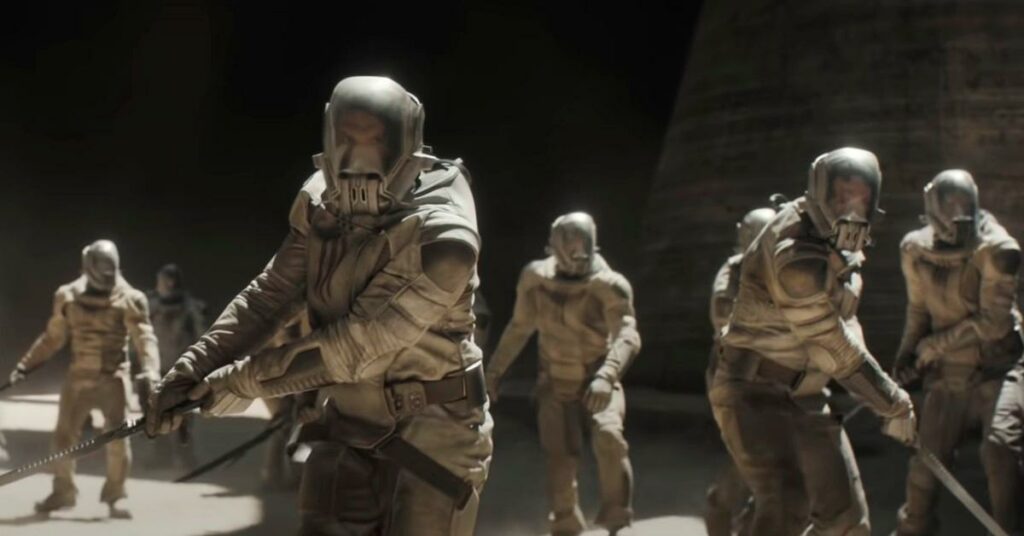 But there’s a new wave of life and experience coming, in the person of the Kwisatz Haderach, a messianic figure who will potentially unify the universe under one family and one powerful presence. It’s part of the Bene Gesserit belief system, but it’s also understood by others, including the Fremen, or native people of Arrakis who grow tired of being ruled over by those above them in the universe’s political system. Can the Kwisatz Haderach really unify? Can a Messiah really rise up to make the world better?

News flash: what you can see now over two-and-a-half hours is just the first half of Frank Herbert’s first Dune novel. Consider it Messiah-not-yet-realized, but still intriguing. Paul isn’t sure he wants to be whatever Kwisatz Haderach role that others think he should take, too kind and empathetic to really be a ruler at this point. And still, the audience can see the potential, the way that people Paul meets respect him, learn from him, want to be part of what they see that he’s part of in the midst of the conflicts raging around them.

This is no Jesus story, but there are parallels. There are questions about what it means to see the Messiah, to know the Messiah, to be like the Messiah. This is all science fiction, all a bit convoluted, but it’s still an interesting exercise in wondering what it was like to follow Jesus of Nazareth, or what we’ll see when Jesus Christ returns. For those seeking flights of fancy, entertaining, visually captivating, and even thought provoking, Dune may be just the space travel you’re looking for this week.

Dune is rated PG-13 for “sequences of strong violence, some disturbing images, and suggestive material.” Special features include an hour of insight into “The Royal Houses,” “Inside Dune: The Training Room,” “Building the Ancient Future,” and more.