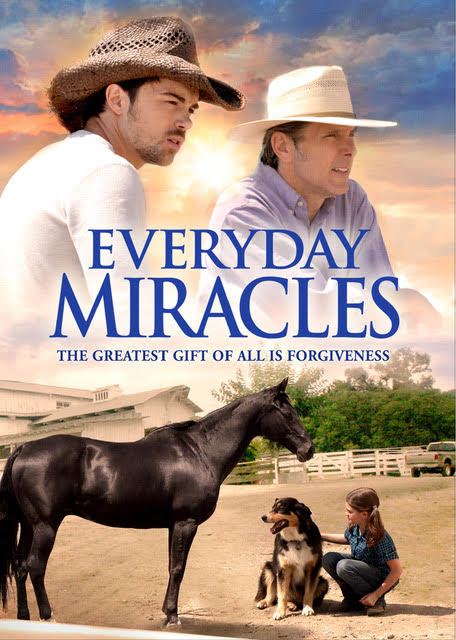 Erik Scott Smith has played a dead body on CSI, appeared in Cold Mountain, and made music for years, but his role in the film Everyday Miracles changed his life. As Cotton, a faith healer whose beautiful gift has been abused by those people he should have been able to trust, Smith plays the central character in the redemption of a family overcoming great loss. But the action on screen pales in reflection to the way that God has worked and continues to work a miracle of His own in Smith’s life.

Acting since he was six, Smith moved to Los Angeles and entered the cycle of acting, shooting onset for three days and then waiting an additional six months to be hired again. One day, playing his guitar on Santa Monica’s Third Street Promenade, where musicians are able to be heard but sometimes be discovered, too, Smith saw a man throw down one hundred dollars into his guitar case. Chasing after the man, who clearly saw more than a musician entertaining passing shoppers, the actor/musician tried to return the money, and instead found himself welcomed into the top midday radio show in Los Angeles through this “chance meeting.”

Over time, Smith continued to act and work on the radio, but it was in filming Everyday Miracles that he experienced what he calls an existential crisis.

“My character Cotton is a faith healer running away from his past, who drunkenly stumbles into the barn of a broken family who have a very large hole in their family,” the actor explained. “Will they begin to believe in each other and themselves and something bigger to fill the hole in their hearts? It’s not a straight line – not a linear thing, especially for my character. He’s doubting how he was raised, his past, and his future. The resonating undercurrent of family is the message of the film, not just by blood though. Some of your true family isn’t even related to you but they see you and love you for who you are without judgment, but they never try to change you. Cotton discovers that throughout the film.”

During filming, the actor-turned-radio talent realized that he’d done his bucket list of acting, with spots on all three CSI shows and a role on a Colin Farrell film, and released musical albums to scratch his artistic itch. But he wanted the family he didn’t have, that he’d always dreamed of. Since filming the movie, Smith has “doubled-down” on the life he wanted, having gotten married and helping to raise his daughter and son. “This was a major crossroads for me. I pivoted my whole life to what really mattered in life.”

For Smith, the lure of the spotlight holds no allure, but the desire to create and collaborate drives him. “I wasn’t athletic but my parents put me on sports teams,” he explained, “and I learned teamwork. From music, I realized that the bass player was as important as the lead singer, even if they wouldn’t put them at the center of the band picture! Everyone has a role to play in a sports team or being in a band. As long as I get to make art and be part of a collaborative team, if I can contribute to this creative soup with my ingredient, that’s important to me. I’ve always advised people coming to LA to not come here to be famous.”

“I think that my parents raising me the way they did in Tennessee shaped that. They were always very honest with me. If I did something well, they told me; if I could do something better, they told me. My dad is a huge fan of sports – baseball is in his veins. Even though I never took to baseball, because I was picking flowers out in the field, they kept telling me to apply myself.”

Now, Smith is raising his children with those kinds of ideals, urging them “to not necessarily try to stand out when the team is more important than the individual.” He says that the teamwork and collaboration he’s teaching them is what he learned, just like the lessons about God along the way, even if he had questions.

“I went to church camp when I was a kid and I remember this line they told us: ‘If you’re only 99% sure, you’re a 100% lost.’ I think more people would be in church if churches were more open to asking questions and wrestling with doubt the way that Everyday Miracles does,” he proposed. “I was a sixteen year old kid, smoking weed and spending drunken weekends with my friends – and I had one loyal friend who paid for me to go with him to camp, just because he wanted me to go with him.”

“I was stuck between the two worlds and I had too many questions. But I turned that into a positive and it’s actually that week that I became a Christian.”

So Smith will continue to study the Bible and other world religions so he can answer his five-year-old daughter’s questions, like ‘What’s the Buddha at our sushi place for?’ He wants her to know what he believes and what his wife believes and to give his daughter space to ask questions so she can believe, too. And he closes with this, “I think there would be a lot more kids hungry for church if the church approached questions that way. I’m having a blast teaching Sunday School to my daughter during the pandemic!”

For more of Smith, check out Everyday Miracles out September 1 on digital, On Demand, and DVD.