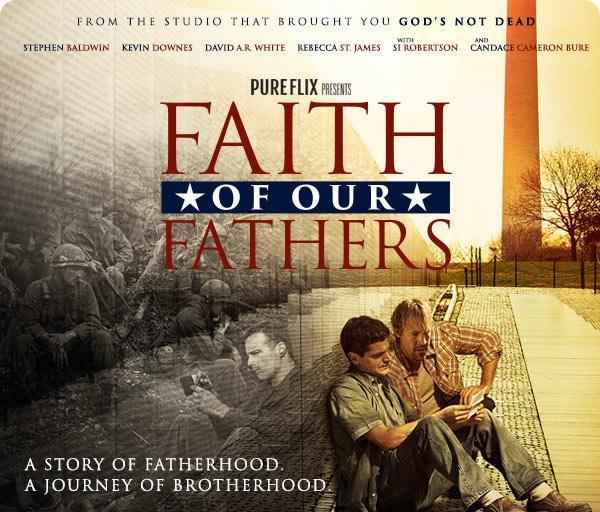 While Memorial Day often signifies the opening of neighborhood pools and the launch of summer, the holiday is intended as a celebration of those who died in the service of their country. Historically, the day traces back to at least the American Civil War, when surviving family members and communities honored fallen soldiers by placing flowers on their graves. In 1966, President Lyndon B. Johnson and Congress acknowledged Waterloo, NY, as the origin of the official celebration. For those seeking out a film to explore what it means to be faithful in the face of war, and to remember those who have died defending the United States, Faith of Our Fathers is a solid choice for the weekend.

Faith of Our Fathers shows the improbable journey of two incredibly different men: driven, almost-married John Paul George (Kevin Downes) who is seeking details about his deceased father, lost during Vietnam, and Wayne (David A.R. White), the son of one of his father’s fellow soldiers. John Paul is the wiser of the two, but still aimless and adrift, while Wayne is headstrong, impetuous, and aggressive. What would be just a dramatic story of learning and transformation quickly becomes a comedic, odd couple narrative as well, broadening the way that the audience sees the film.

The two sons journey together, with John Paul exploring the letters Wayne has in his possession, while Wayne ransoms them for financial renumeration. As they read the letters, they approach the Vietnam Veterans Memorial, learning more about their fathers and each other. We may know intellectually that sons and daughters need fathers and mothers, but Faith of Our Fathers highlights the damage that occurs when a son or daughter is left to fend for themselves, and the sacrifice of the parents who fought for freedom.

“This film is a love letter to those who have served selflessly for our country so that we can have the freedoms that we have today. It does it in a way that we don’t necessarily need the graphic violence to get the point across. But it’s a very tender-hearted piece. My hope is for vets to see it and they’ll feel recognized in a way they’ve never been recognized or affirmed before in their lives,” Downes said in 2015.

Framed by the present day, we see the way that faith was discussed by the two fathers during the tension of Vietnam, while their foxhole struggles accelerate their conversation about God’s love for them both. It precipitates some conversations between the two present day sons along the way, but nothing like what will happen as they confront the past. Thanks to an unexpected collision with a connection to their fathers, the sons find themselves facing eternity.

In a film that celebrates the sacrifice of the men and women who have served the United States by living and dying in uniform, there is a definitive strain of faith that asks us to consider whether or not we know that we’re loved by the God of the universe. Reverend William T. Cummings said in Bataan, “There are no atheists in foxholes.” What Faith of Our Fathers does beautifully is to show that not all foxholes are on the battlefields of war. Many of them are in our homes, in our communities, in our schools, and in our places of work. But we need to recognize that God is present in the midst of all of those holes, and God is calling us to a loving relationship, built on repentance and forgiveness.