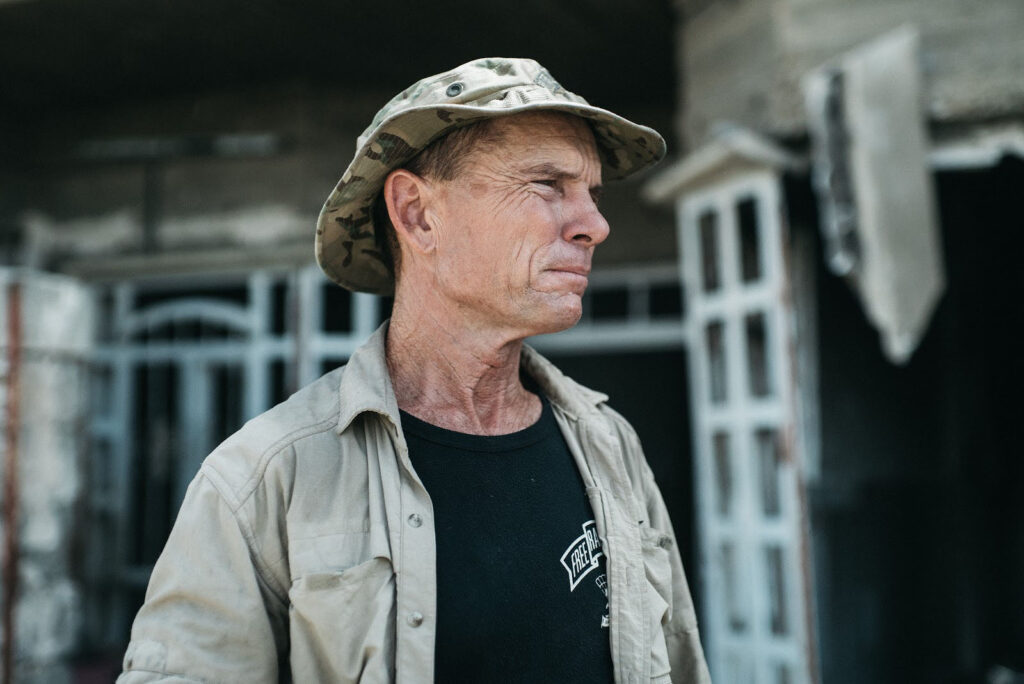 For twenty-seven years, ex-Army Special Forces and Fuller Theological Seminary-trained pastor Dave Eubank has been literally freeing the captive, healing the sick, defending the orphan, and feeding the hungry in far-off places like Burma and Syria. On February 24 and 25, audiences across the United States can experience some of what Eubank has seen through the Fathom Events documentary Free Burma Rangers. This is his story.

To read the first part of this story, click here to read how two American filmmakers found a story of faith, heroism, and love that they had to tell.

Eubank’s father, a missionary to Thailand, asked him to move there and help care for those oppressed as a result of the civil war, so he asked his girlfriend Karen to marry him and moved to Burma in 1993. By 1997, the ten-year veteran of the Green Berets had founded the Free Burma Rangers, and since then, Eubank, his wife Karen, and his three children have worked alongside more than 4,500 FBR to free, feed, and protect 1.5 million refugees in Burma, and since 2016, Afghanistan and Syria. Now, stepping out from behind pseudonyms used to report the conditions to world news media, Eubank is telling his story in his own words.

“It felt like the right time,” Eubank shared from the front line. “When you’re ready to tell a story or write a story, the momentum builds up and you want to tell it. It’s also combined with twenty years of work, and we’re relatively well known in the region. We prayed about it and opening the Bible, we read, ‘don’t hide your light under a bushel.’” 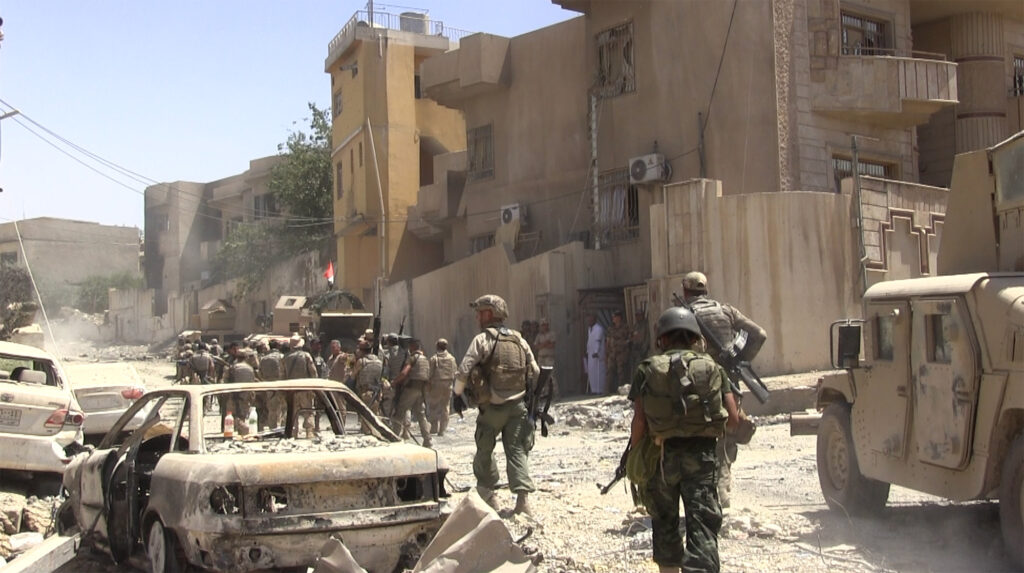 Karen had a similar vision, of a buffalo on the trail, blocking the whole path. But the buffalo had its head in the bushes, thinking it couldn’t be seen. Eubank recognized the double confirmation, that God was giving them an opportunity to tell their story in their own words. The thing that had held Eubank back for so long, that his life wouldn’t hold up under scrutiny and that his failings, weaknesses, and “stupidities” would be out there for everyone to see, fell away when he saw that the hero of this story is really Jesus. ”God can use me full of mistakes, God can use anyone. The film is not about pointing people to adventure or war or humanitarian work but pointing to God.”

Eubank’s complete integration of his faith and his life is evident in every response, in every thought proposed. He’s clear that he’s a child of God and that so is everyone else. He sees the call to be pastoral and a missionary but he also sees the call to be a warrior. He just sees violence as the means of last resort, saying that he doesn’t even trust himself with deadly force… unless he’s following God, trusting Jesus from moment to moment. He says it’s not about having a policy to use violence or not use violence, but trusting Jesus regardless of the situation. To explain the point, Eubank shared two stories.

In the first, Americans had bombed Mosul and killed a family of eight, the parents and six children. Eubank felt pulled toward the people there, and his translator tried to stop him, saying that they hated Americans, especially now. Eubank prayed, realizing that he was present as an ambassador of Jesus and walked up to the funeral procession mourning this family.

“I walked up, with a pistol under my shirt,” recalled Eubank. I said, ‘I’m sorry, we’ll try to help you, I know it was a mistake that your family was bombed. They stared at me. I asked for forgiveness for me and for America, and then I got down on my knees and prayed. I said,. ‘I have nothing else to give you. I won’t fight but if it’ll make you feel something, you can take my gun and kill me. I won’t stop you.’”

“The older brother of the man who was killed, he was big guy, bent down and lifted me in the air and hugged me. He said, ‘we will never kill you.’” 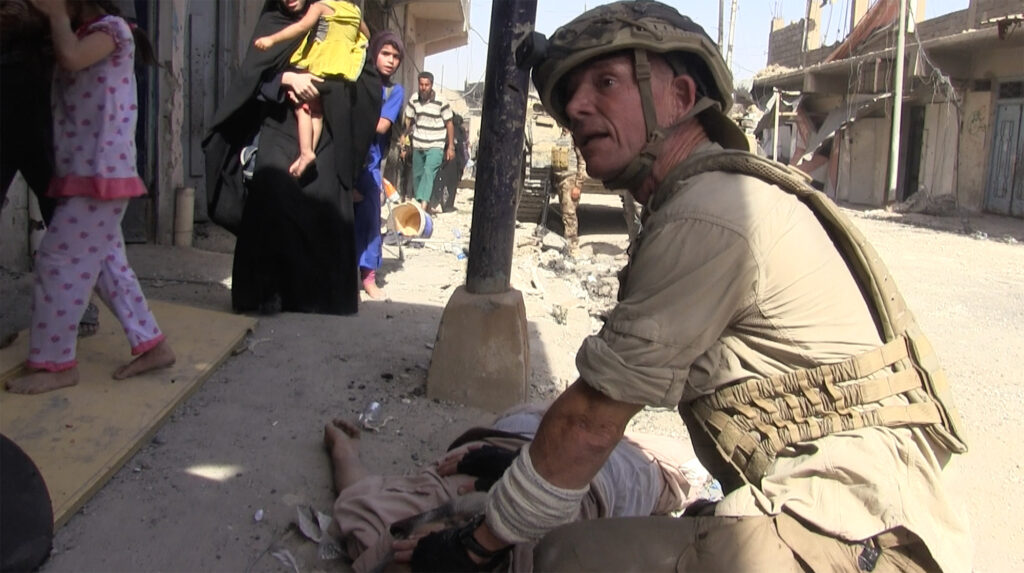 In the second story, one that didn’t make the final cut, Eubank and his team found themselves on the edge of a firefight between three ISIS gunmen holding down two positions filled by twenty Kurdish soldiers. Eubanks prayed – a common theme – telling God that he couldn’t get involved, because he’d be dead, it wasn’t his job, that he would make the situation worse, that the Kurds would just need to have the guts to finish off the enemy, that he didn’t want to damage his reputation as a missionary.

“I prayed all of this, I asked God,” the FBR founder said. “God said clear as day, ‘Do your best…’ The day before, I’d met a soldier who said, ‘I don’t know what to do with these two extra hand grenades.’ The next thing, I’m running forward to clear the trench – a psalm went off in the back of my head which never happens – and I killed the three men.

Eubank recounts this story, matter-of-factly, even apologetically. He proceeded to clean up the men, praying for them as he did so. When the soldiers who had been pinned down ran to the trench, they asked incredulously what he was doing, recounting how they’d previously disgraced dead enemies. When Eubank pointed out that the dead ISIS soldiers were someone’s child, even God’s child, the Kurds sheepishly proposed that maybe their treatment of their enemies should change.

In two quickly recounted vignettes, Eubank has cut to the quick of what makes him stand out. He’s present in these situations to share the gospel of Jesus Christ, going so far as to baptize an enemy who converted to Christianity in footage shown in Free Burma Rangers, but he’s also present to protect those who can’t protect themselves. And he’s always putting both agendas in front of God, asking God to direct each day, each step, each moment. 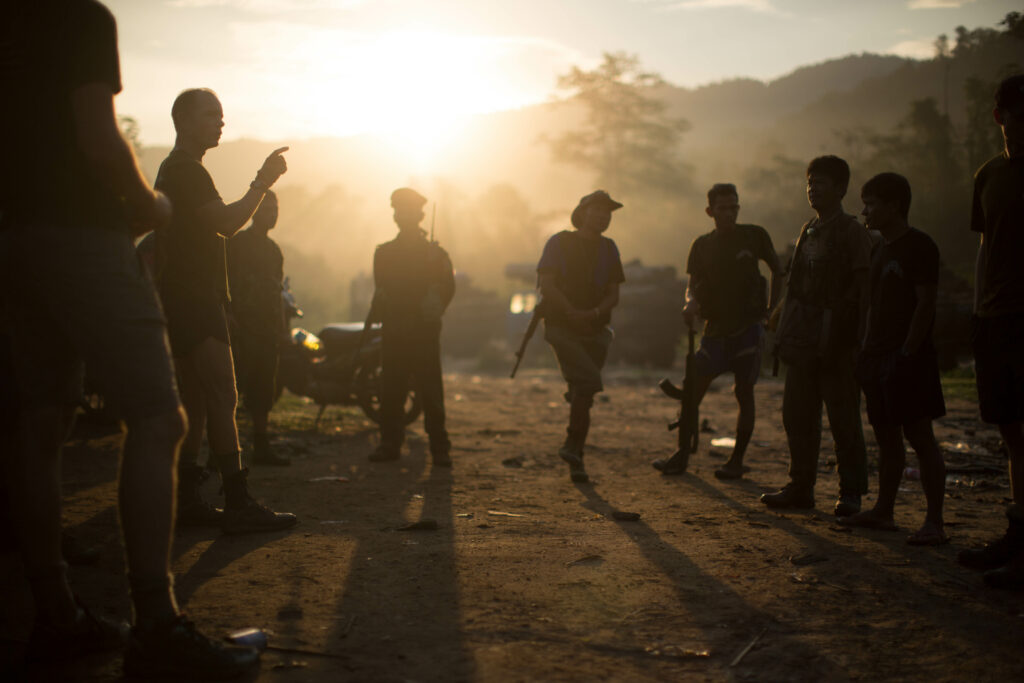 These lessons were learned at the feet of Eubank’s missionary parents. Eubank’s father served in the Korean War, before returning to Asia with a Bible as a missionary afterward. He’s the one who taught Eubank to pray to God for direction, and the one who reminded him after the ISIS incident to always ask God’s forgiveness after taking a life. The senior Eubank told his son, “You’re a son of a mother, not pure, not an angel, not Jesus. You have to ask forgiveness.”

In his childhood years in the jungles of Thailand, Eubank’s missionary father had brought his family back to where he served as an engineer. An athlete who wrestled, played water polo, boxed, and practiced martial arts, the senior Eubank was no stranger to force but he knew force didn’t change a heart. He told his son, “Guns are sometimes necessary, but they don’t change a person’s eternal value. I support war when necessary but I consider myself a pacifist.” And he still keeps a loaded shotgun handy, even though he never intends to use it.

One story stands out to Dave Eubank now, looking back on the first round of life in the Thailand jungle. His dad strode out of the jungle angry, mad about something he was experiencing as a missionary there; his first interaction with his wife ended angry. Before he could cool down, the missionary encountered his three-year-old son Dave, crying and fussing about something, being “a punk” as Dave says now. The father smacked him on the bottom and stomped up the stairs.

“That’s when he heard a voice, speaking to him,” Dave shared. “‘Who are you serving?’ the voice asked. ‘What’s the spirit you spanked him with?’ My dad asked if that was an ultimate question and got a ‘yes’ in response. He walked back downstairs, got on his knees in front of me, told me the whole story and asked me for forgiveness. It’s not that my dad didn’t spank me, because he did and I deserved it 99.9% of the time but it changed. He believed in the power of the gospel.”

Eubank’s faith is growing and evolving, too. His faith in God’s ways and the power of the name of Jesus continues to grow, and his faith in his own ways have diminished. Humbly, clearly, directly, he re-iterates that without God, he can do no good, that he grows clearer and clearer on the fact that there is no middle ground to the Christian faith.

The warrior missionary sees commonality with the people he meets who believe, recognizing that they are pursuing God and that God speaks to people in different ways. He talks about the Reality God sees, while humans can only grasp a little reality, what’s within their field of vision. That’s why Eubank is so clear on his daily belief, his clarity of vision. It’s not for tomorrow or next week or a year from now.

Dave Eubank doesn’t know what will happen tomorrow. He simply prays each moment that he’d be obeying God.

Free Burma Rangers will screen in select theaters via Fathom Events as a joint production between Deidox and Lifeway Films on February 24 and 25. You can find theaters and buy tickets here.