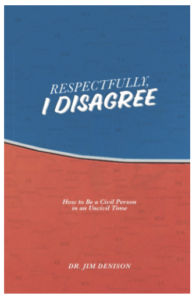 It’s no secret why founder and CVO of the Denison Forum, Jim Denison, felt led to write a book on civility. All it takes is one quick scroll through Facebook to realize that our culture, even our Christian culture, struggles to respectfully disagree.

Amidst the chaos and divisive opinions regarding a global pandemic, a national election, and even the way we conduct our worship services and family gatherings, it’s time that people take a step back and realize that we are to spearhead the honest, yet respectful way to disagree.

Jim’s new book, Respectfully, I Disagree, delves into ways to use practical, biblical principles to approach disagreements, with the Golden Rule as our standard:

PEYTON: Could you let me know what the cataclysmic event was when you were like, “You know what? Yeah, it’s time to write a book about how we can disagree with each other and still be humans?”

JIM: I became very concerned about the degree with which Christians are engaging in cultural conversations, cancel culture, social media interactions during the election season— in a way that I’m afraid is going to handicap our witness when the election is over. We want to be so careful right now to have a witness that we can utilize on the other side of the election with all the chaos, and all the issues, and all the divisiveness…

So, it’s really vital right now in this election season that we preserve our witness for the sake of our witness in the coming years.

PEYTON: You list three main reasons, simple step-by-step ways, that we can have conversation respectfully. Are there any of those that you want to highlight?

JIM: Matthew 18:15, for me, has become a real guiding principle. The idea that Jesus offers us, “I’m not allowed to say about you what I won’t say to you.” If my brother sins against me, I am to go to him. I’m not allowed to talk about him. I am to talk to him first. Think how different our culture would be if everybody followed that principle.

PEYTON: Somewhere, we have lost that the Golden Rule is truth. It’s no longer black and white. Could you tell me what you think the biggest lie is that our culture has accepted that it’s okay to be this uncivil with each other?

So, now, I have to say that you’re evil, that you’re dangerous. It’s not just that we disagree; you’re an enemy, a threat to my pride, to my power, to my platform.

PEYTON: How do you think today’s culture, as a whole, is defining civility?

JIM: Only 7% of Americans say we don’t have a problem with civility. It’s an obvious problem and an escalated problem. But I think the culture would probably, at least, unfortunately, quite often define civility as “agreeing with me.”

And in a larger sense, it’s tolerance. We must tolerate all behavior and perspectives that don’t hurt somebody, except if I consider you intolerant, which is obviously a contradiction. It’s obviously illogical. It’s nonetheless the idea that unless you’re tolerant of all the positions, you must be canceled. Now I must “intolerate” you.

PEYTON: Do you think our culture, as a whole, is just so scared that they could be wrong that anger is the natural reaction? Very few people are reacting in a way that’s not out of anger. Do you think we just don’t like to wrestle with the fact that we could maybe be wrong?

At the same time, if I’m only listening to physicians that agree with me, there’s gotta be a part of me that is wondering if I can be all that right if I’m not willing to consider that I might be wrong. So, perhaps there is an insecurity that’s driving a good deal of this protectionism. Perhaps there is a sense of my own inadequacy that is fueling my behavior.

We know, counselors have known for a very long time, that bully behaviors are almost always a manifestation of deep-seeded insecurity, of deep-seeded inferiority. Perhaps that’s acting out in the cancel culture as well.

You can find Respectfully, I Disagree on Amazon and on Jim’s website:

Jim Denison is the founder and CVO of the Denison Forum, a nonprofit Christian media organization that comments on current issues through a biblical lens. His Daily Article, an email newsletter sent every weekday morning, reaches more than 208,000 subscribers in 203 countries.