Northern Irish mathematician and Christian apologist John Lennox has gone toe-to-toe with the likes of Christopher Hitchens and Richard Dawkins, but in the upcoming film Against the Tide: Finding God in the Age of Science, the seventy-six-year-old finds himself face-to-face with Hercules, Kevin Sorbo. As an Emeritus Professor of Mathematics at the University of Oxford, and with several other honors to his resume, Lennox never imagined he’d be in a film, until a viewing of God’s Not Dead changed that.

Watching the film that featured the music of Newsboys and Sorbo’s role as an atheist college professor, Lennox realized that the film quoted some of his own thoughts. The author of several works, like Can Science Explain Everything and Being Truly Human, he watched with growing admiration for Sorbo and for the elements considered in the film. And then the owner of the home turned to Lennox and proposed that the philosopher and mathematician team with Sorbo to explore some of the big ideas that overlap between faith and fact.

“My friend wondered what it would look like to have a film dealing with the big questions of life and giving Christian and science answers together,” remembered Lennox. “He had this idea that Kevin Sorbo might be the good person to be the interviewer and ask the questions. When we met with him, I could see Kevin wasn’t only a good professional actor but he was onboard with the ideas.”

Even though he openly admits that filmmaking is not his genre, Lennox acknowledges that Sorbo put him at ease, asking relevant questions that grew off of their scripted discussion. Recognizing that films were few and far between in his native Ireland seventy years ago, Lennox still seems amused that his interests, in math and language, have now put him in a motion picture. 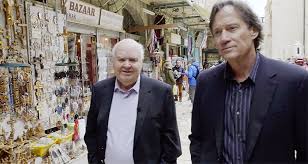 “I was never very good at sports either,” the mathematician mused. “I was into mathematics more than general natural sciences. I had very good mathematics and language teachers and saw the relationships between the two. Grammatical structure is akin to mathematics. The wider interest came in science when we had to do theoretical physics.”

Science and math have always been in important in Lennox’s view, but he’s more interested in the way science works than in the intricacies of scientific results. That’s what he hopes people will see in the way he and Sorbo talk about faith and science together in their new film.

“There is an impression in our society that science is at war with God, that if you use the science explanation, then you can’t use the God explanation or vice versa. Science has been very successful in asking questions like, ‘How does this work? Why is this bit there?’ But it doesn’t attempt to answer questions of meaning or purpose.”

Looking at the film, Lennox sees it as an introduction to more of what he’s writing about and working on, like what he’s proposed in Can Science Explain Everything or showing in videos on JohnLennox.org. With Sorbo’s help, he sees ways that the film might hook an audience to learn more.

“There are a number of hooks in the film, like when I am being attacked in some of the prominent debates with Hawkins and Hitchens. That gets people thinking. All the way through the film, Kevin is asking penetrating questions: those are the questions people ask. The audience can identify, ‘Oh, that’s my question! That’s something I wanted to hear about.’ The disadvantage is that you don’t have time to spell out an answer that answers a seminar or debate. We want to get across that the God Answer makes sense, and hope that people will seek to learn more.”

On November 19, audiences can see Lennox and Sorbo in Against the Tide in theaters.