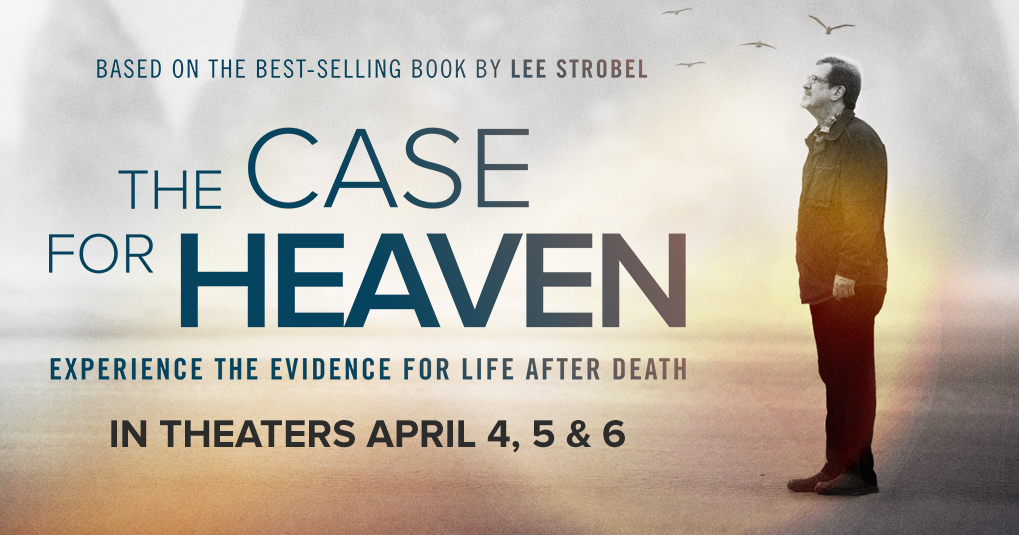 Lee Strobel is coming back to movie theaters with the cinematic version of The Case for Heaven, a Fathom Event April 4-6, only in theaters. While he explored the feature-filmmaking business with the biopic A Case for Christ, this film features the documentary work of director Mani Sandoval, as he and Strobel criss-crossed the country interviewing experts to find out if heaven can be taken seriously.

The author’s appreciation for the work of Jon Gunn with The Case for Christ is reflected in his thoughts about the work Sandoval did this time around. “The commonality with the films is the pursuit of excellence by the directors,” Strobel explained. “Jon showed me a rough cut and asked me what I thought. When I said it was good, he said it wasn’t good enough and reshot a dozen scenes. Mani has worked hard, traveling the whole country, from Oregon to Louisiana, from Chicago to Phoenix, trying to get the right feel for the film.”

Strobel explained that the Sandovals immigrated from Guatemala, and grew up in rough conditions in south central Los Angeles where their father was a pastor. Mani and his brother Gil started a design and marketing company which now has a staff of thirty people, even as they’ve broadened their scope to make a documentary. Without them, the author says there would be no movie.

“I tend to be a word person, not a visual person. The translation from book to movie is driven by the director and the producers who cast the vision, and help me see the potential. Looking back at making the previous movie, I would tell my old self to trust the experts, the people who know film and have the same vision for getting out the truth.”

It’s one thing to write a book presenting evidence of Jesus or heaven, but when you’re making a movie, you don’t want to present something that presents dry facts.”

While The Case for Heaven has its genesis in a moment when Strobel almost died, its foundation goes back further, to the relationship he began as a fourteen-year-old with his now-wife, Leslie. She went home and told her mother that she’d met the boy she was going to marry, and they dated off and on through high school and college. “We became best friends before we became a couple and that’s given us a solid foundation,” Strobel proposed. “We’re preparing to celebrate our fiftieth anniversary in August and recently a friend getting married asked what advice I could give him. I said it’s been easy because we’re best friends. The most turbulent time was when I was an atheist and she was a Christian because we didn’t know if it would last. Once we became believers, it sunk the roots even deeper, and our marriage became robust and rich and satisfying.”

But one day, Leslie almost lost Lee. He says that the doctor told him he was “one step away from a coma, two steps away from dying.” Hovering between life and death in the hospital, the author realized that “there’s nothing more important than what happens after we close our eyes for the last time.” As a Christian, he believed what the Bible said about heaven, but he has degrees in journalism and law, and says that he’s quite the skeptic.

“I wanted to know if what the Bible said about heaven was credible,” he remembered, “so I looked into the existence of the soul, near-death experiences, and evidence for the Resurrection of Jesus. I came away more satisfied, convinced that heaven is real – not make believe or wishful thinking, thanks to exploring the scientific and historical realities.”

The audience won’t have to take Strobel’s word for it though, with interviews of experts like Dr. Sharon Dirckxx, Professor at The Oxford Center for Christian Apologetics, a neuroscientist who says there’s more to us than our minds; Pastor John Burke of Gateway Church in Austin, Texas, who has studied 1000 cases of near death experiences and investigated cases to corroborate them and compare them to Scriptural expectations; and philosopher Dr. Chad Meister of Bethel College, who cites proof for the resurrection and Jesus being the same person he claimed to be.

Strobel hopes audiences will walk away convinced, with the peace and hope he feels. “I don’t have to be the expert,” he said. “I just pursue the experts around the world and get them to put the cookies on the low shelf where we can all get to them.”

The Case for Heaven debuts in theaters April 4-6.