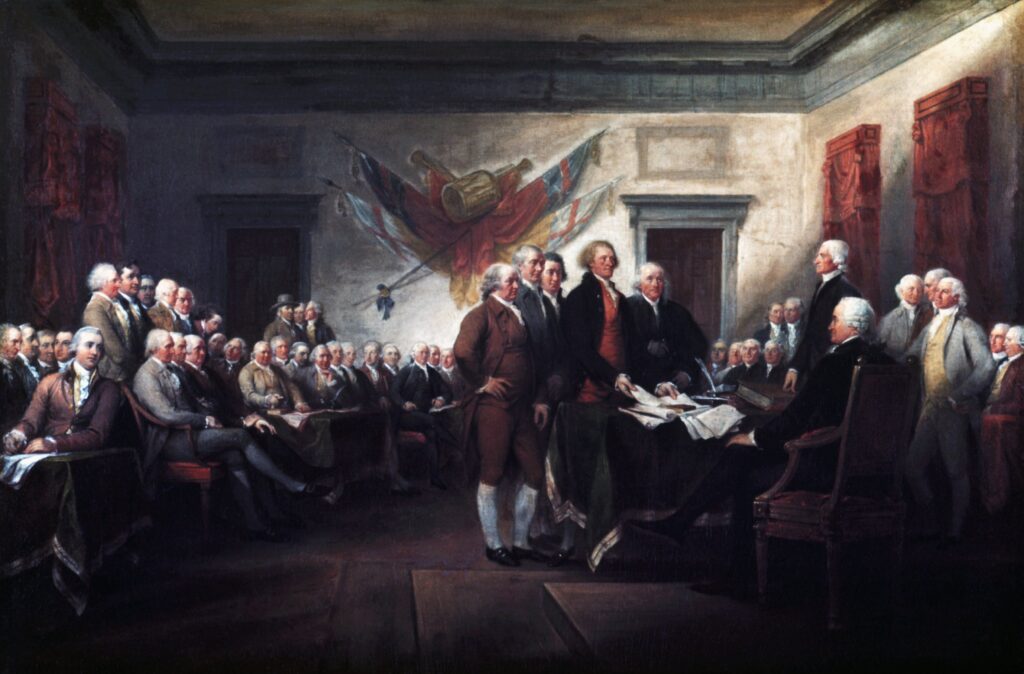 This week, we’ll celebrate Independence Day on July 4, when the Continental Congress of the thirteen American colonies declared themselves free from the rule of Britain’s King George III, who they found to be tyrannical and uncompromising. The preamble of their Declaration of Independence states, “We hold these truths to be self-evident, that all men are created equal, that they are endowed by their Creator with certain unalienable Rights, that among these are Life, Liberty and the pursuit of Happiness.”

These colonies had been partially formed by individuals and groups of people who had fled other countries seeking religious freedom. Like the Israelites freed from the oppressive rule of the Egyptians in Exodus,these people sought a place where they could worship God as they pleased and longed to explore the establishment of a new world where all people would be free to do what they were designed to do: to worship the Creator of the universe.

Of course, these days in American history have generated films like Mel Gibson’s The Patriot, Chad Burns’ Beyond the Mask, the musical 1776, and Will Smith’s Independence Day. [Okay, the last one was about defending Earth from extraterrestrials, not the British.] Country music stars (and Bruce Springsteen) have written ballads; Betsy Ross’ flag helped form the symbol that universally represents the country around the world. The signing of the Declaration and the subsequent War for Independence were truly foundational moments in the life of these United States. But as we’ve discovered lately, again in our cyclic movement as a nation, “life, liberty, and the pursuit of happyness” are not the same as the Biblical freedom that God proposed for the Israelites – or for all of us in Jesus Christ.

Jesus quoted Isaiah 61:1 when explaining His purpose here with us, “The Spirit of the Sovereign Lord is on me, because the Lord has anointed me to proclaim good news to the poor. He has sent me to bind up the brokenhearted, to proclaim freedom for the captives and release from darkness for the prisoners.” Jesus clearly saw that He was called to teach, preach, heal, serve, and, ultimately, sacrifice His life, but this social justice element of what He believed can’t be ignored. He saw that loving His neighbor and teaching His disciples to do the same meant that there would be friction between His way and injustice, between the status quo of the way things were and the way they should be, and between the kingdom of God versus the kingdoms of this world.

Building on those principles, and expanding on what Jesus’ sacrifice did on the cross, Paul wrote in Romans 8:1-4, “There is therefore now no condemnation for those who are in Christ Jesus. For the law of the Spirit of life in Christ Jesus has set you free from the law of sin and of death. For God has done what the law, weakened by the flesh, could not do: by sending his own Son in the likeness of sinful flesh, and to deal with sin, he condemned sin in the flesh, so that the just requirement of the law might be fulfilled in us, who walk not according to the flesh but according to the Spirit.” Later, in Galatians 5, he added, “For freedom Christ has set us free. Stand firm, therefore, and do not submit again to a yoke of slavery…. For you were called to freedom, brothers and sisters; only do not use your freedom as an opportunity for self-indulgence, but through love become slaves to one another. For the whole law is summed up in a single commandment, “You shall love your neighbor as yourself.” If, however, you bite and devour one another, take care that you are not consumed by one another” (5:1,13-15).

So Jesus and Paul, summing up the Old and New Testament, saw that freedom in God’s love was due to Jesus’ sacrifice for us and the subsequent obedience of being a disciple — all focused on loving God and loving our neighbor better and better each day, more faithfully. This Independence Day weekend, I wonder what it would look like if we celebrated freedom by loving better? What would independence from the way of the world in the kingdom of God look like if we loved our neighbor more compassionately, regardless of what they looked like or how they celebrated, free of judgment? How would life, liberty, and the pursuit of happyness in the discipleship following Jesus Christ impact the broken world we live in?

When the kingdom of heaven comes upon the earth in all its glory, only then will we be fully free indeed, singing for all eternity, “Free at last, free at last, thank God Almighty, we are free at last!”