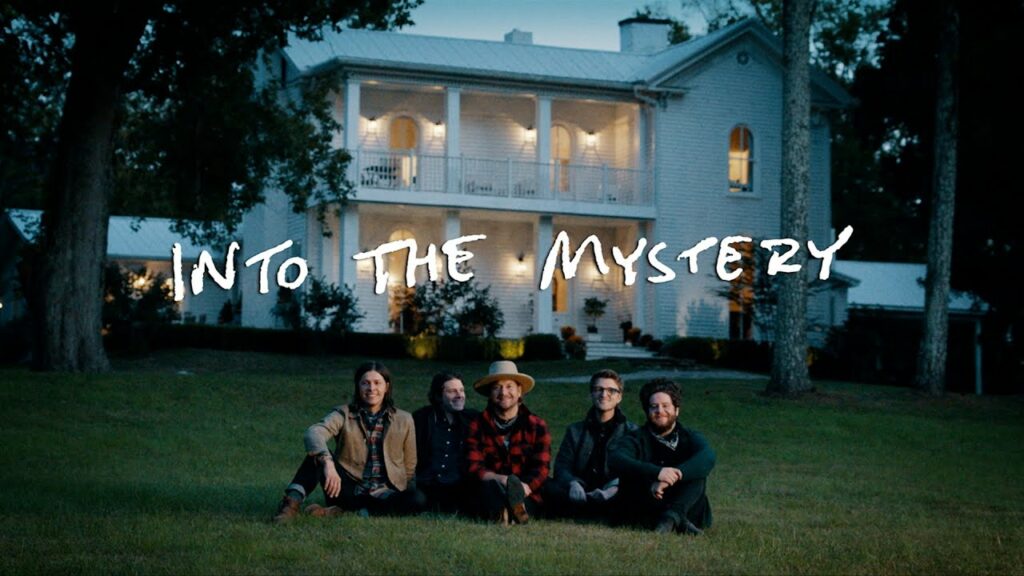 “Is music spiritual or emotional?”

The central question exists at the heart of Needtobreathe’s new documentary Into the Mystery. Providing an extended behind-the-scenes look at the band’s process in making a new album, the film also serves as a state of affairs for the current lineup of the band. Founded in South Carolina in 1998, the band originally included brothers Bear and Bo Rinehart, drummer Joe Stillwell, and bassist Seth Bolt. Since then, Bo and Joe have left the band, while Josh Lovelace (Hammond organ, piano), Randall Harris (drums), and Tyler Burkhum (guitar) have joined the group to make the album Into the Mystery. Together, they explore their previous process in making music and the new, freer way that they hope to make music moving forward.

Stripped of their ability to tour, the music for the record develops over three weeks in a house that the band renovates into a sound stage to record the music, with director Chris Phelps’ camera catching elements of the recording and interviews with members of the band. The storytelling and music-making is clearly personal for members of the band, especially Bear Rinehart and Bolt, who’ve had the longer term investment. Rinehart knows that his sometimes fiery relationship with his brother is public knowledge, and the album is a way of catharsis for where they’ve been, what they became, and what they could still be in the future. He talks consistently about finding joy in music making rather than focusing on the expectations (or pursuit of excellence), leaning into an emotional understanding of the art of music.

In the course of explaining what they hope to do with their new music, Needtobreathe acknowledges the weight of expectations and the pressure they put on themselves to succeed. When Jon Foreman of Switchfoot shows up for a session, he shares with the audience this artistic truth: “2020 is a great distiller of why you do what you do.” For musicians and filmmakers, the pandemic tore away the expected ways of expression and earning income. To move forward, artists would make music for themselves, for the purpose of making music (and in Needtobreathe’s case, to the glory of God), without knowing how it would be received or if it would pay their bills. With the incredible familial split in Needtobreathe, this album was twice as risky during the pandemic, and yet the band feels more carefree, more open to the movement of the spiritual through the words they write and sing. [It’s the risk-taking lifestyle that Rinehart says Jesus modeled – taking risks to do what was right.]

Bolt asks late in the film, “Can we use music as medicine to speak to the different pains we’re experiencing?” He shares the band’s desire to do something that would matter, that would elevate and lift up, calling that the outcome that would be “mission accomplished.” It’s part of how the band is healing itself, hoping to bring others that same balm for the struggles of today.

“People think of this redemption story like climbing a mountain, but it really happens at the bottom,” proposes Rinehart. He knows the band has been to the bottom, spent time there struggling, with the scars to prove it. But music, the spiritual, kept them going through the midst of it, and Needtobreathe knows others may find healing, too, through a movie about a band’s honest struggle and some heartfelt music, too.

Into the Mystery the album is available now; the film debuts on November 3 for one-night only in theaters.