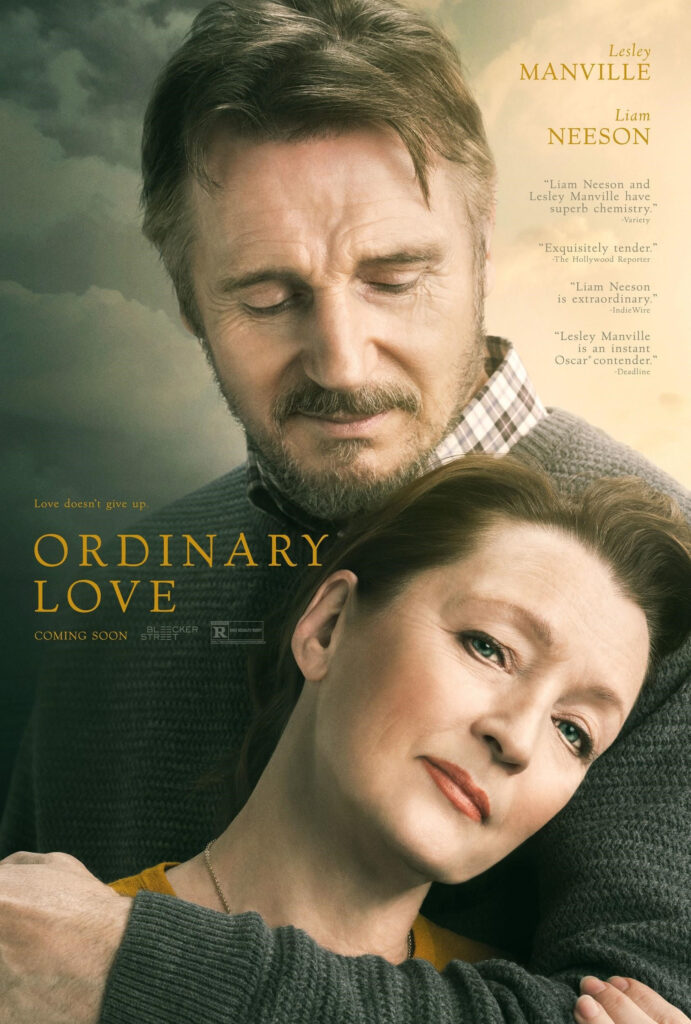 In Ordinary Love, Academy Award nominees Liam Neeson and Lesley Manville play Tom and Joan, a couple in their sixties who discover that Joan has cancer even as they wrestle with their grief over losing a daughter. Irish directors Lisa Barros D’Sa and Glenn Leyburn worked to tell the couples’ story of courage and love without sacrificing the humor and joy of a life spent loving one another.

While Leyburn and Barros D’Sa are husband and wife, they worked together on several projects leading up to their cinematic partnership in Cherrybomb and Good Vibrations. In their third outing in film together, they wanted to tell the story of how an ordinary couple moved through the this tragic diagnosis without falling into sensationalism or sentimentality. Thanks to beautiful performances by Manville, and Neeson, known more recently for fighting his way through scenes, the film allowed the directors to show off their gifts and tell a powerful, intimate story.

“We wanted it to be authentic,” Barros D’Sa said, “to show that humor exists inside of the relationship even now, that there’s lightness, joy, and warmth in our understanding of this story. There’s a normal life to share and celebrate, a way to make each other laugh even in the midst of this.”

Leyburn shared that the two spend weeks and months in preparation before filming to have a shorthand they can use when working on a film. He said that he’s often behind the camera but that they have chosen to have one voice in speaking to the actors between takes, and that is Barros D’Sa’s. “We know what aspects each of us brings to the project,” he added.

While the cinematic couple has dealt with everything together, including the loss of their daughter, in the film, they find themselves held apart physically because the cancer is inside of Joan’s body but not Tom’s. “The stakes are higher,” Barros D’Sa proposed. “While losing their daughter must be the most brutal thing, that has moved them to the edge of life.”

Still, Leyburn says that the directors focused on not making it just about the illness, during the preparations, the filming, and the editing. “Sometimes, the temptation is to focus on the person with Joan’s story, but then it turns into a cancer story. This is a love story.”

Asked in closing where the directors see themselves in the context of the film, Barros D’Sa smiled, considering what she calls the “ordinary moments” that every couple has watching television on the couch and bickering. “We’ve never encountered the terrible things Joan and Tom have,” she said, “but I hope in their situation that we’d approach it with courage and humor.”

To see how Joan and Tom respond to this latest tragedy, check out Ordinary Love in theaters on Valentine’s Day.