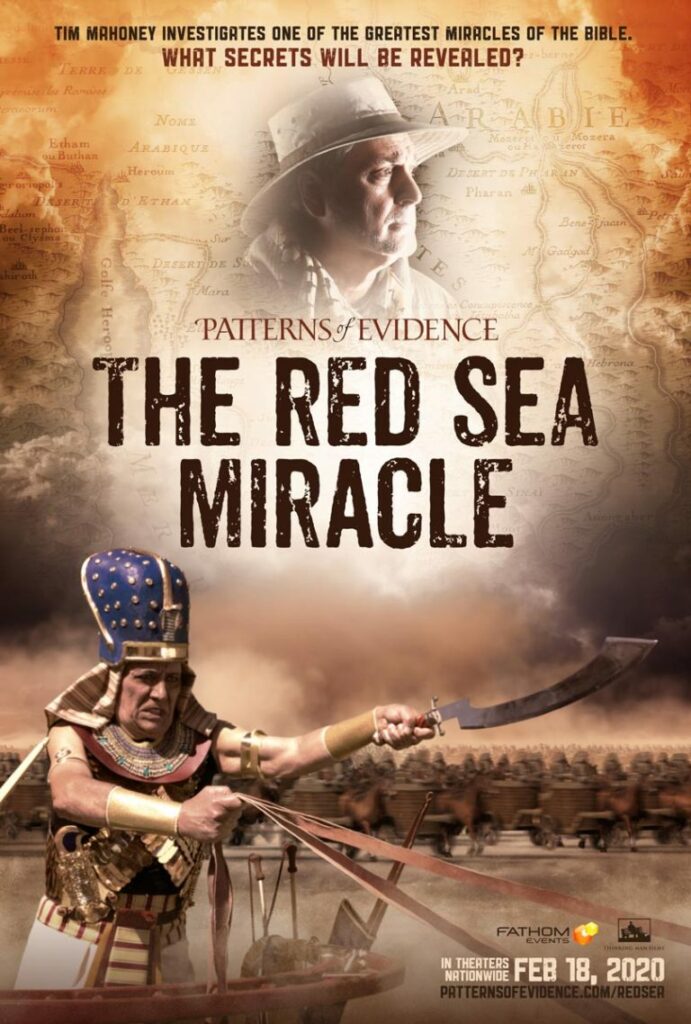 Tim Mahoney has been tackling questions of Biblical Old Testament events for years, but in his upcoming, two-part Fathom Event Patterns of Evidence: Red Sea Miracle, he’s looking at the biggest miracle mentioned in the Bible after Creation and pre-Jesus. Counting on the influence of Cecil B. DeMille’s The Ten Commandments and Dreamworks’ The Prince of Egypt to have piqued the interest of audiences everywhere, Mahoney wants to highlight what he calls the crowning achievement of the Exodus.

“While the death of the firstborn was big, most people didn’t see it happen because they were hidden away in their own homes,” Mahoney explained from his offices in Minnesota. “But the Israelites coming through the sea with a wall of water on their right and on their left? God destroyed their enemies, the Egyptian army, after telling Moses, ‘Stand firm and see what I’m going to do.’”

More than a hundred times, the Biblical scriptures remind God’s people to remember what God did in bringing them up out of Egypt. Little children in Sunday School and grown adults in sermons have been hearing about the parting of the Red Sea for years in church. Mahoney says that what’s really amazing is the sheer population God delivered.

“Having been in the desert a good bit, it’s shocking to think about six hundred thousand men or two to three million people counting women and children surviving in the desert,” the director explained. “But it’s referred to over and over again that it was six hundred elaph, elaph means a thousand, that the Bible is confirming itself.”

Mahoney’s latest documentary pursues two viewpoints, one Hebrew and one Egyptian. The Egyptian viewpoint attempts to understand the Exodus on a small scale nearer to Egypt, focusing on the timing that would allow for the wind to blow across a shallow body of water. The Hebrew viewpoint has more of a miraculous tint to it, which Mahoney sees in the linguistics of Scripture. (The Hebrew word for sea is “Yam Suph,” which the Greek translated into Red Sea, not reedy sea.)

“Over time, there are attempts to naturalize what happened,” Mahoney said, “but instead of the smaller body of water, we can see in the Psalms and Ezekiel that the Hebrews thought of it as the Gulf of Aqaba.”

Having already delivered The Moses Controversy and The Exodus, Mahoney isn’t new to tracking the historical and linguistic evidence for stories in the Old Testament. But he was surprised to find that the films overlapped, that the evidence from the three films tied together.

“The support for the films is unified, coming together from the same source,” he shared, “and there are parts of the story where you have to acknowledge the supernatural to move forward. But somehow, people can say that God created the universe and then they wrestle with whether he could’ve parted the sea or not.”

Mahoney won’t turn aside from his pursuit, even as he says it’s become more common for people to search for naturalistic understandings of what they’ve read in Scripture. While they struggle to embrace the ideas of God in pillars of fire or cloud or the number of Israelites who fled Egypt, Mahoney wants to fact check what God said with the evidence. “What is the truth? What can we assume? What can we figure out from the evidence?” he asks.

Even now, the director is excited because the investigation is opening people’s eyes to the reality of what God did and still does. While he wants to show miracles, Mahoney recognizes that sometimes, it’s people’s minds that change first. Sharing a preview of the upcoming film, he says that an Egyptologist told him eighteen years ago that he’d found no evidence of Hebrews in Egypt, but that in interviewing the same expert for The Red Sea recently, the Egyptologist told him that there were Hebrew words showing up in Egypt.

Mahoney knows there is still more evidence to be discovered, that showing people what the historical data holds can help them consider the truth for themselves. He knows that these aren’t just films, but archaeological tools that God can use to change a person’s mind – and then change their heart.

Part One of the Red Sea Miracle will debut via Fathom Events on February 18; the second part will follow on May 5. A panel discussion will follow the theatrical presentation.