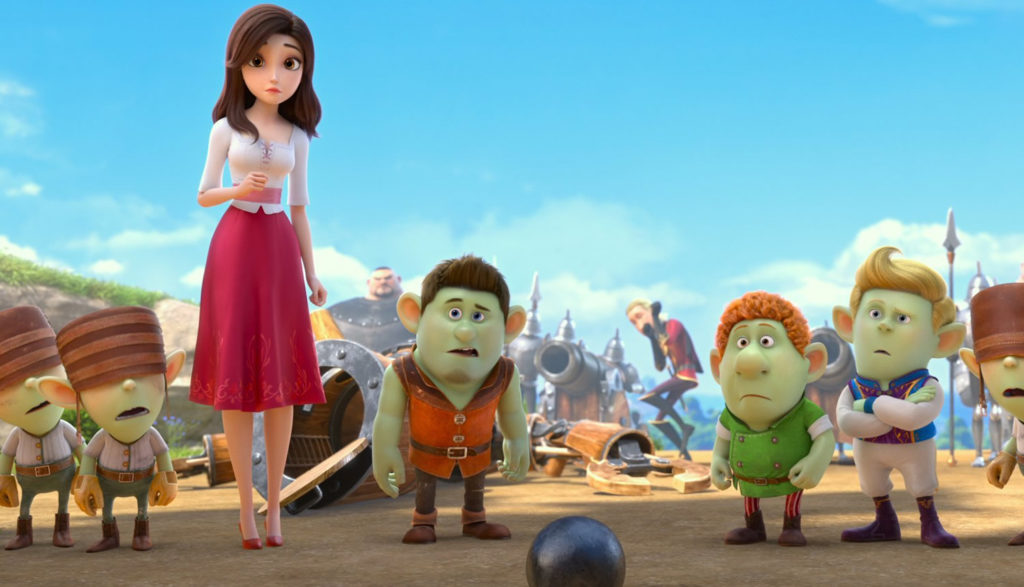 A mash-up of the Grimm Brothers’ Snow White and the Seven Dwarfs and a Danish fairy tale called Red Shoes, Red Shoes and the Seven Dwarfs finds the principal characters meeting again, but in a whole new way. Snow White (Chloe Grace Moretz) is the kind and chubby daughter of King White, who has fallen under the sway of the evil witch Regina (Gina Gershon), who tries every day to generate a pair of red shoes that will make her beautiful again. When Snow White steals the shoes and goes in search of the Fearless Seven, a band of magicians led by Merlin. But the Seven have issues of their own (they’ve been cursed to be short and green thanks to another magician’s curse), and together, they’ll explore what it means to be beautiful – and how to save the kingdom from Regina and her henchman, Prince Average (Jim Rash).

This Korean animated film with English speaking actors has some clever, amusing moments, and the voice actors are certainly up to their characterizations of the Seven, Snow White, Prince Average, and Regina. The animation itself has solid effects on the storyline, with a certain sense of homage to fairytale films like Shrek. It’s visually captivating, and the banter has plenty to add ot the film.

The film has a nice wrap-up about how beauty is more than what we see that matches up with Christian ideals about being created in the image of God and being God’s children (everyone is beautiful). But it has spent so much time convincing us that everyone is focused on how they look, instead of the character of who they are and how they act, that in the end, it feels like the characters settle for each other rather than truly appreciating who they are.

There are certainly mixed messages that children (and adults) receive about appearances. But the animation presentation (everyone is white or green) and the track of the story don’t actually help the audience really have a true conversation about how they look and how that’s okay! It’s a bit of a do what we say and not what we did kind of conversation, where the only character who really seems to love others the way they are is Snow White – but she certainly wishes she was slimmer.

In the end, the film is entertaining, even clever, but unpacking the ramifications for children will require some nuanced work on the part of parents.