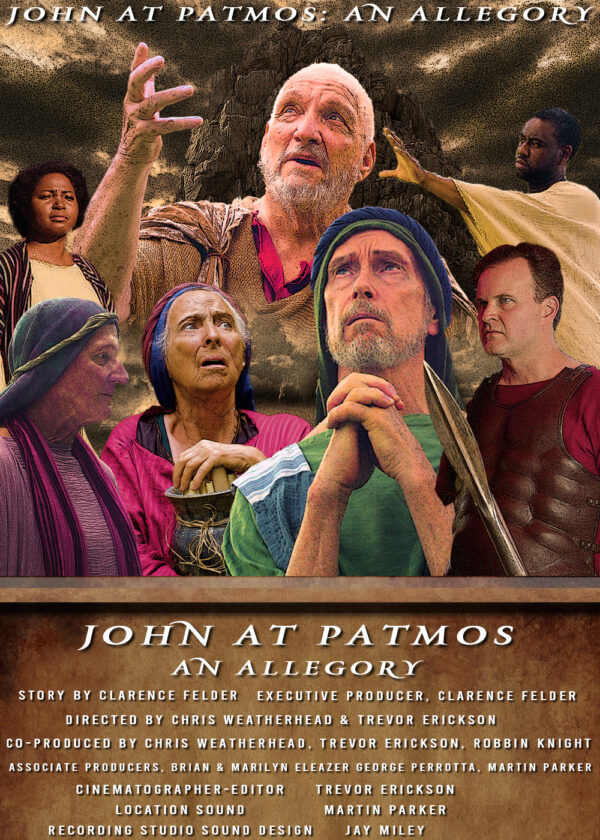 John at Patmos: An Allegory

The apostle John, stranded on the island of Patmos, has visions and visitors who help him realize his purpose.

John at Patmos: An Allegory is a short, fictionalized account of the apostle John’s experience as he receives revelation that is the account of the Book of Revelation. Much of this narrative is not accounted for in the scripture in terms of a slave named Lydia who serves John and is the voiceover narrator of the story. He is also visited by his father Zebedee and the apostle Paul, both of which are not found in scripture, and he has an encounter with a Roman guard that leads to the guard hitting John in the face, viewed from behind. Angels do appear to him at various times to deliver the story, and while angels do appear to John in the biblical account, it is believed that Jesus is the one who recites the letters to John, not two angels.

Likewise, the viewer does not see all of the visions that John sees; instead, there are various depictions of ocean waves, volcanic explosions, and fiery shooting stars, but the message of the book is clear, and moreover, the focus of this film seems to be on communicating the gospel, as every conversation that John engages in is centered around the salvation story.

This movie is an easily digestible story of John’s experience and incites provocative questions around why he was exiled in the first place, how this is part of God’s overall plan, and the importance of placing faith in Christ prior to Armageddon. The movie has earned our Dove Seal for Ages 12+.

John at Patmos delivers the gospel in a refreshing style that places urgency behind its story of the end of the world.