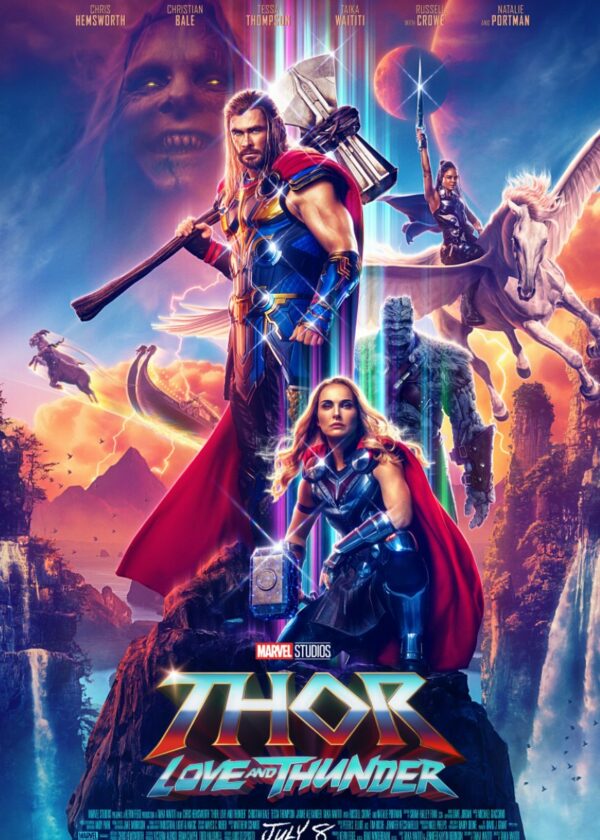 Thor enlists the help of Valkyrie, Korg and ex-girlfriend Jane Foster to fight Gorr the God Butcher, who intends to make the gods extinct.

What if there was no eternal reward? How would that change our decisions? Gorr is a man who tragically loses his daughter and is told by a “god” that there is no eternal reward for his faith. That turns him into the villain, the God Butcher, who Thor and the cast must fight to stop.

At the beginning of the movie, we catch up with Thor while still with the Guardians of the Galaxy. When some celestial problems arise, Thor returns to New Asgard on Earth and finds out that his old girlfriend, Dr. Jane Foster, now has Mjolnir, his hammer. Gorr the God Butcher arrives in New Asgard, as well, and kidnaps all the children. The rest of the story is a fight to save those kids.

Dr. Jane Foster has a secret, however – she has stage four cancer. Jane and Thor team up and rekindle their relationship while her mortality looms over their decisions. Thor and Jane are faced with decisions of sacrificing their own lives for the greater good.

Fans of Thor: Ragnarok will also enjoy this movie as director Taika Waititi returns with the same comedic superhero fare with a great deal of heart. The visuals are standard amazing for the MCU, and the pacing keeps the film pushing forward to a redemptive and emotional ending, despite the silliness that ensues along the way. Love and Thunder connects back to former Thor films and the larger MCU but is more focused on the character of Thor than some of the recent MCU projects.

Valkyrie declares herself as gay and expresses her desire for a partner, and one of the kidnapped kids has changed his own name from what he was given.

Thor: Love and Thunder takes a complex and interesting look at what happens to people without the belief in eternal reward and redeems the characters in the face of that eternity, but the crude sexual jokes and content may be offensive to some parents and viewers.

Surprisingly complex theme of how the villain is told there’s “no eternal reward” for worshipping the gods and that turns him into a villain after the death of his daughter. That is corrected and redeemed through love at the end.

Good themes of how death doesn’t mean the end of life and grief and pain don’t give an excuse to do evil to others. Dr. Jane Foster is deemed “worthy” of Thor’s hammer because she fights for the innocent. Thor shares his “god” power with the kids to help them fight evil.

Sh*t. “Feeling sh*tty” is a major theme of the movie, so it’s used often.

Moment of drinking among friends and Thor gives Stormbreaker, the axe/hammer, its “first beer.”

Thor naked from the back.

In a minor subplot, Valkyrie declares herself as gay and hopes to find her true love. One of the Asgardian kids has changed his name from what he was given at birth and makes Thor use it.