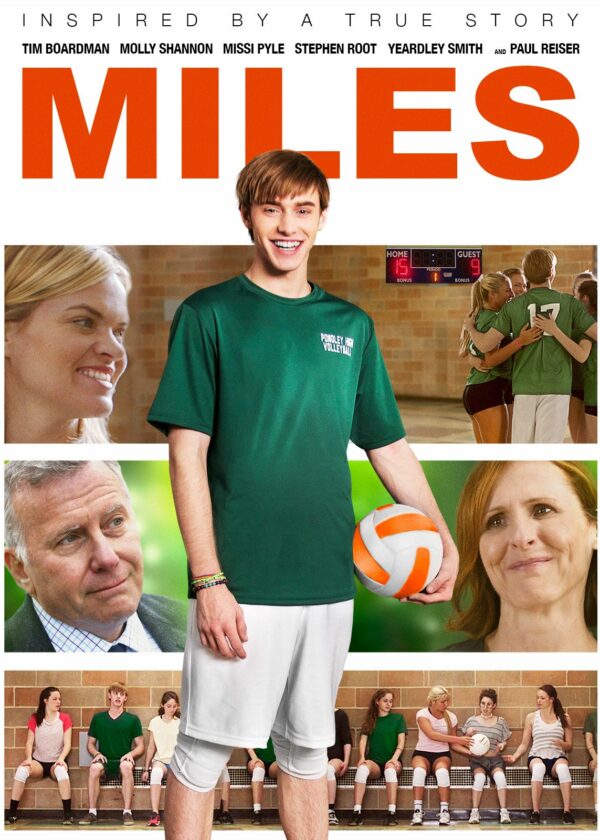 A kid from middle America, desperate to move to Chicago, joins the volleyball team to get a scholarship — the only catch is that his high school only has a girls team.

Inspired by a true story, Miles the movie focuses on young 17-year-old Miles, a senior at Pondley High School in Illinois in 1999. Miles longs to be the next Steven Spielberg, but life isn’t easy for him. His father is distant, and his dad doesn’t get along with his mother, either. His mother is an English teacher at his school. And Miles is keeping a secret too. He is secretly gay and has been messaging other gay friends on Instant Messenger. At this point, his mom doesn’t know, but does his dad?

Tragedy strikes and Ron, Miles’ dad, dies suddenly. Miles’ mom, Pam, opens up to Miles, telling him that his dad had a great sense of humor when they first got married, but he began to change. He became controlling and she states she knows he was fooling around on her. She admits she almost asked for a divorce, and she says she wishes Ron would have been nicer to Miles. Miles later is messaging a friend and the friend asks if his dad knew he was gay, and Miles replies that yes, he did, and “he didn’t care…about anyone.”

Miles wants to leave Pondley no matter what it takes. He wants to go to a college in Chicago and take film courses. But things just seem to get worse and worse. Pam searches through her deceased husband’s files only to learn that Ron had spent all their savings on buying an expensive car for his girlfriend, Jennifer. There is no money left and no college money for Miles.

Pam, seething with anger, goes to Jennifer’s house and is greeted by her mother. She wants the Corvette that Ron had given Jennifer to sell it for money for herself and Miles. The mother refuses and Pam storms away.

Miles, determined to find a way to get a scholarship, learns of a volleyball scholarship that would practically pay all of his college expenses. Since there is no boys’ volleyball team, he asks the girls’ volleyball coach, Coach Leslie, if he can join the girls’ team and she allows him to try out. He makes the team, but this will lead to name calling, and many parents becoming livid over the “unfair advantage.” The other teams begin to forfeit games when Miles shows up to play. Miles proceeds with his plans and manages to contact a man that has a say in the volleyball scholarship, and he invites him to come watch him play. Unfortunately for Miles, a lot of parents from other schools are unhappy which leads to a showdown with Pondley school officials to decide Miles’ fate. Will he be allowed to continue to play or not? To complicate things, Pam has begun to date a school official who happens to be involved in the decision about Miles.

This off-beat movie includes a funny scene in which Pam, doing housework while in a good mood, puts on music and dances with her laundry basket while making all kinds of dance moves!

This movie is not family friendly. It contains some strong language including the “F” bomb, and explicit sexual comments including slang for male genitals. It also includes a woman trying to encourage the newly widowed Pam to go out and have sex, and it features the teen character of Miles messaging about sexual situations and his hidden gay orientation. On top of this, it shows an unmarried couple making love, with a cover hiding the woman but with her thigh exposed, and she and the man are moving and moaning. And the woman urinates on her husband’s girlfriend’s car and it is obvious as to what is going on.

This movie has not earned our Dove seal as a family-friendly film.

This film has too many content issues and falls short of being a wholesome, family-friendly film.

A woman does everything she can to help send her son to college; a boy learns his dad did plan to help him on a college road trip; several friends encourage a young man to pursue his dreams.

Explicit sexual comments involving male genitalia and oral sex; a newly widowed woman has sex with a widower and it is fairly graphic; sexual comments made by young man and his friends on Instant Messenger; a slang for having intercourse; a husband and father was having an affair with a young woman.

Wine at a meal; a woman is obviously drunk; a comment about having a drink and a beer.

Cleavage; a woman’s thigh is seen; a boy who is shirtless and in his boxers; a girls’ volleyball team wears shorts.

Death and grief; tension between characters; a woman urinates on a woman’s car.