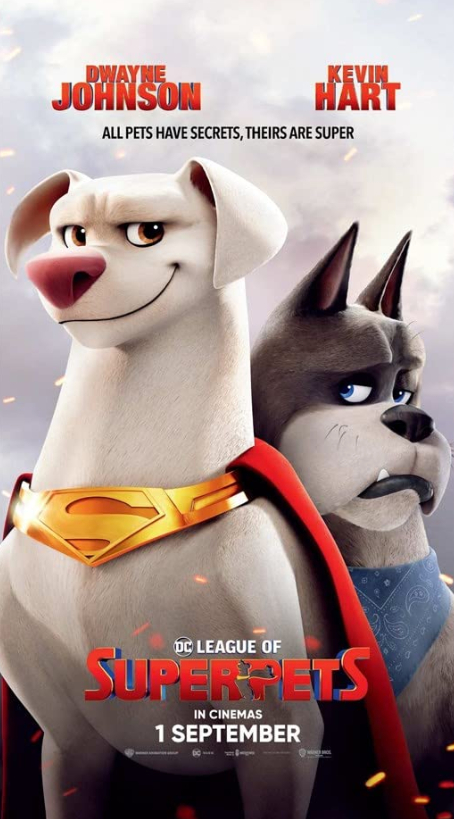 Krypto the Super-Dog and Superman are inseparable best friends, sharing the same superpowers and fighting crime side by side in Metropolis. However, Krypto must master his own powers for a rescue mission when Superman is kidnapped.

Superman (John Krasinski) and Krypto the Superdog (Dwayne Johnson) have always been best friends, but when Superman begins to think about solidifying his future with Lois Lane (Olivia Wilde), Krypto begins to feel a little forgotten. But after Superman and the Justice League are suddenly kidnapped, Krypto will have to push his feelings to the side and join forces with a group of newly superpowered pets to save not only his beloved Superman, but the whole world from the evil plan of a wicked guinea pig named Lulu (Kate McKinnon).

DC League of Super-Pets combines two things that almost every child loves — cute animals and superheroes. While it might just be another entry in the ever growing pot of modern superhero cinema, the film asks the question most of us have been asking since Adam West first put on the cowl, or RDJ the iron suit: do superheroes have time for pets? The answer, according to DC League of Super-Pets, is that they absolutely do. In fact, sometimes, pets are the ones who do the saving.

While some superhero films remain dark and gritty, DC League of Super-Pets keeps things warm and colorful. Containing an impressive cast of voices set alongside plenty of jokes, explosions and references to DC comic lore, the film finds itself easy to digest for both children and adult viewers. If you needed a story very much about believing in yourself, making friends and believing in them too, then you came to the right super-pet movie.

Ultimately, DC League of Super-Pets is a film by pet-owners for pet-owners. It’s a love letter to the relationship between man and animal, showcasing the sacrificial love that is evidently found in such deep bonds between pets and their owners. The film explores a multitude of positive themes, but I found this one to be the most moving: love is not self-serving.

(Minor spoilers for DC League of Super-Pets below)

In the film, Ace (Kevin Hart) movingly shares with Krypto the sacrificial way that he ended up in a shelter. By the end of the film, Krypto learns that loving someone means you’ll do anything for them, “even when it hurts.” In short, the film reminds us that love is about putting others’ needs before your own. Also, that the love of a pet remains unconditional. Can’t argue with that.

What to Talk About:

If you’re on your way home from the movies and have some time in the car, maybe use it as a chance to talk about what love is. An imposing topic, surely, but one that has been easily set up by Krypto’s actions in the film. Discuss how meaningful it was for Krypto to accept some healthy space between him and Superman, and what it means for him to have been willing to sacrifice himself for everyone in the end. After all, “There is no greater love than to lay down one’s life for one’s friends.”

And if you have young ones, maybe a quick reminder that your pets at home don’t have superpowers. But just like the ones in the movie, your pets love you unconditionally.

DC League of Super-Pets is a lighthearted reminder of not only our pets’ love for us, but what love itself is. And also, there’s no superpower more mighty than friendship.

The main character learns that true love is putting someone before yourself.

Though they are not married, it is implied that Lois sometimes sleeps in bed with Superman. Two women are shown to be romantically involved in a passing moment.

A few curse words from one character are bleeped, and other words like “crap” and “losers” are used.

Lots of explosions, superpowers and low stakes for this one. Nobody dies on screen and most action sequences include moments to highlight the characters’ well being. Violence is cartoony and fantasy in spirit. Nobody stays hurt.