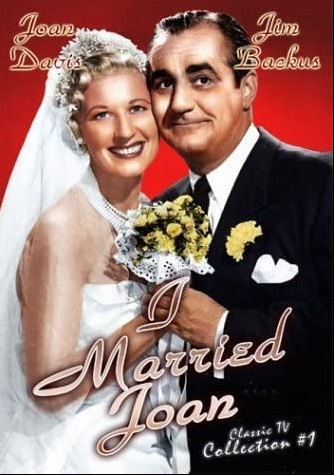 Brad tells a bickering couple how he met Joan while she was a hostess on a plane. In the meantime, Joan buys a fur coat and tries to hide it from her husband.

The 1950s popular series I Married Joan kicks off with the adventures of a popular Judge’s (Jim Backus) scatterbrained wife Joan (Joan Davis). In this pilot, Joan, reminiscent of Lucy Ricardo from I Love Lucy, is the center of husband Judge Brad Stevens’ workday when he explains to a bickering couple on the verge of divorce how he met his wife, and how he handles being married to such a character. He tells them that it’s all about being able to laugh and not take anything too seriously, and he explains that he does a bit of manipulating himself in order to manage his relationship with such a character.

The troubled couple decide to try this method in hopes of reconciling, while Brad is working hard on his latest scheme to divert his wife’s plan of hiding the new fur coat she bought, and, of course, funny antics ensue. There is a lot of physical comedy, especially on Joan’s part, that keeps the episode moving along at a quick and humorous pace. Brad decides to come home early, just as the new coat is being delivered, and Joan squirms and makes up comical stories to divert from what is really in the box, going so far as to tell Brad it’s a leg of lamb for dinner, which he then offers to cook.

When the fur coat ends up in the freezer, where food belongs, Joan tries to lull her husband to sleep, so she can thaw out her new treasure, but to no avail. Brad finally confesses that he knows what she’s up to, and the ending is sweet and innocent with a comical twist that one might expect of an old 1950s series about a mismatched couple, who keeps their love intact by accepting one another, just as they are.

I Married Joan is a delightful blast from the past to an age where romantic comedies began. Though there is always a bit of lying and scrambling to cover the truth, it’s all in good innocent fun.

Joan lies to her husband, and he deceives her, but they forgive one another