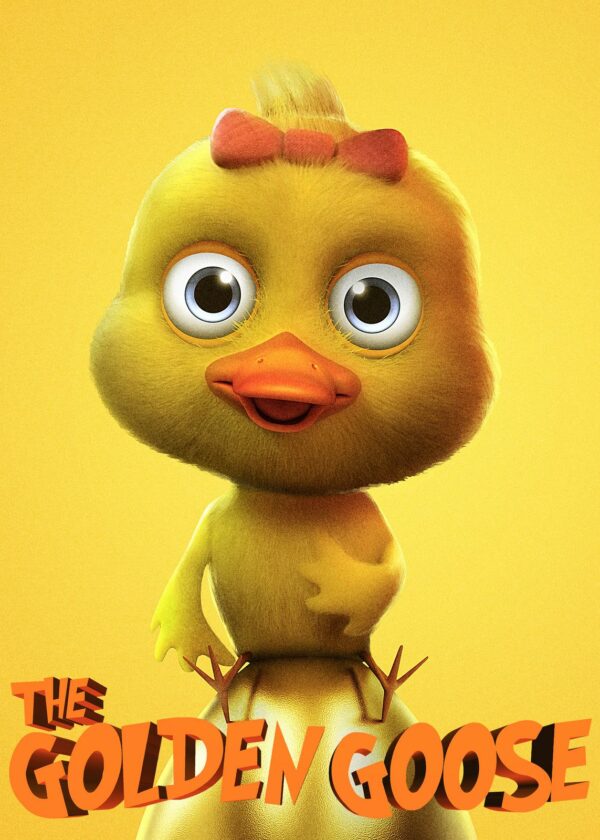 Join Goldie the golden goose, the Easter Bunny’s favorite helper, as they both ask others what Easter means to them in this holiday adventure for kids of all ages.

This engaging family movie features the delightful characters Goldie the goose, and her best friend, Bert the Easter Bunny. Easter has come and gone, and they plan to head out on an adventure in their rocket ship, the Feather. They want to enjoy a well-earned vacation. Goldie tells Bert it was the busiest Easter holiday ever.

Goldie confesses to Bert that although she works with Bert at Easter time, she doesn’t really understand what the gifts, chocolates, Easter eggs, and fun games are all about. She wants to know the meaning of Easter. Apparently, Easter means different things to people of different cultures. They decide they will travel, and Goldie will ask various characters what they think.

Goldie visits Hatter, along with Mr. Doormouse who lives in Hatter’s hat. “Goldie!” says the Hatter. “You almost scared the hat off my head and made me fill my pantaloons!” Goldie humorously replies, “Oops! Sorry, don’t want you to have another stinky pantaloons incident.”

Hatter is funny as he says he’s working on turning his Easter basket into a new hat for next Easter. Goldie teases that he can add a new name: Basket-head Hatter! Goldie asks Doormouse and Hatter what Easter means to them and their favorite part. “The hunt! The hunt!” replies Doormouse. “The thrill of the hunt,” says Hatter, referring to Easter egg hunts. “It brings friends closer together.”

Next Goldie and Bert visit the Game World Galaxy, and Goldie speaks with Doodley Diggs. Goldie tells Doodley they turned their vacation into a “mission,” When she asks Doodley what Easter means to him, he replies that he never really thought about it. Then he says it’s like a time to start over again, like plants and animals, and getting one’s energy back and starting anew. “If not for re-spawns, it would totally be game over.” One of the nice themes of the movie is the idea that sometimes in life there is a chance to try again when something hasn’t panned out. It’s said through practice and hard work you can always get better and make it through, so there’s no reason to give up.

The next stop is the Land of the Giants, with a time travel trip to visit little 15-year-old Georgie Washington! He is asked about Easter in 1747 but it is stated Easter wasn’t celebrated in the U.S. until 1870! Goldie advises George to smile for future portraits! After a quick meeting with Blunderboer, Goldie visits Diego in Rattletown. Easter to him means the story of Jesus and Goldie agrees that it is “such a story of love and sacrifice.” The idea that good people will overcome and that angels will help keep people safe is mentioned. It’s stated that it’s a good lesson, whether a person is a Christian or not, that good overcomes evil. Diego also mentions Halloween preparations and the Day of the Dead as times he celebrates.

A recurring theme is spending holidays with family and friends. Soon Goldie visits Gepetto, the great toymaker and pizza maker. When Goldie asks him about Easter, he replies, “That’s a good question.” “Thanks G-Man!” she replies. “G-Man?” says Gepetto. “I like that!” He enjoys the big feast they make and feeding anyone who’s hungry. His meals include fresh bread, eggs, and lamb chops. He also talks about Jesus being resurrected from the dead, and how he soon let his followers know he was back!

Next, the viewer is told how other religions celebrate Easter, and the Mighty mensch in the Magic Forest mentions the Jewish faith and the celebration of Passover, and how it takes place about the same time as the Last Supper. He says that the exit of the Jews from Egyptian bondage and the sparing of lives is why they celebrate. It was the beginning of the Exodus.

The themes are wonderful, and it’s nice to see Jesus mentioned, as well as the idea of love and friendship.

Think About It: Loving people during the holidays and sharing special occasions with them is important. This is a great discussion point with kids. And the fact that love is sometimes shown by someone placing a hand on a person’s shoulder and being there for them. And although it’s important to say, “I love you,” love in action is important too. When parents go to work every day, they are showing love, providing for the ones they care about. As Goldie so eloquently says, “Love is wonderful. It’s really incredible.” Due to its important themes of love and of Jesus’ sacrifice, this movie has earned our Dove seal for All Ages.

THE DOVE TAKE: The love which Easter represents is nicely portrayed in this film, as well as historical moments, and the entire family can enjoy watching it together.

Christ’s sacrifice, love, and resurrection are all mentioned in the movie, as well as the Passover.

Various characters explain about how Easter represents love and family, and Diego and Gepetto mention the sacrifice and resurrection of Jesus; Goldie has helped Bert the Easter Bunny during the busy Easter holiday season; Goldie encourages young George Washington to smile.

Just the mention that there is romantic love as well as other types of love.

Jesus’ sacrifice is mentioned although his death on the cross is not specifically mentioned.

Various celebrations are mentioned including Halloween and the Day of the Dead, which is typically celebrated in Mexico with altars and dishes of food being used to honor the dead.