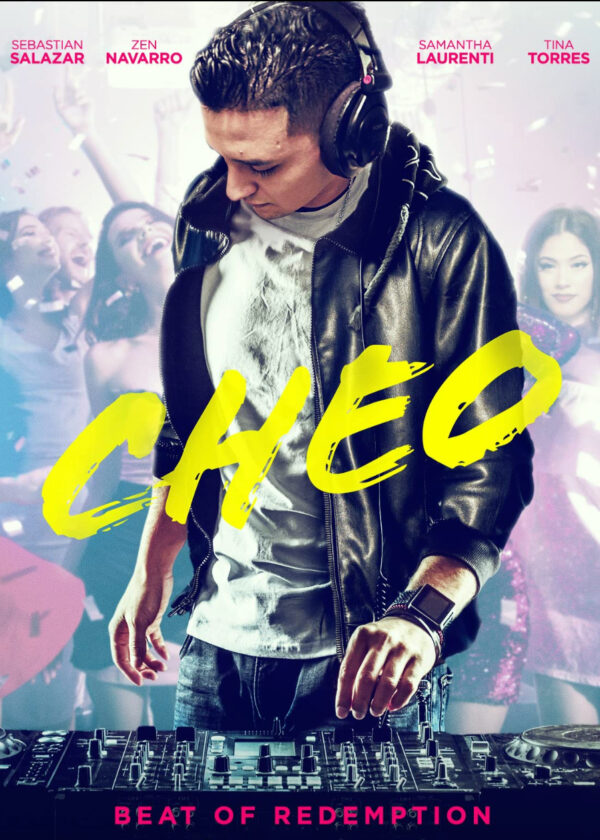 Cheo and his girlfriend Blue just graduated from high school with dreams of hitting it big as a disc jockey. Spending his days spinning with his best friend Eli, creative differences hinder their friendship of setting the world of fire.

Editor’s note: This movie was originally titled Fill Your Heart.

Cheo is a faith-based film that gives us a good performance by Sebastian Salazar as “Cheo,” a young Latin man who has an aspiration to be a disc jockey or a musician, and to escape his poor neighborhood. He hangs out with Eli Cole (Zen Navarro), who isn’t as noble as Cheo. In fact, when Cheo eventually writes some terrific music, Eli pilfers it and claims it as his own. Eli winds up with a pretty good and lucrative recording contract.

Thrown into this mix is a girl named Blue Tejada (Samantha Laurenti), who is crazy about Cheo, and who sees his potential. But Cheo takes her for granted and doesn’t treat her very well-at least in the beginning.

A local record store owner, Roland (Hence Singleton) turns Cheo onto some great music of the past, featuring Miles Davis, Duke Ellington, and others. Cheo loves them but Eli doesn’t, and they butt heads over their differences. When Roland introduces Cheo to a record producer from Deville Records, Cheo’s future seems bright and secure. This is when Eli interferes and winds up with the profitable recording contract.

The film, despite its mostly serious nature, features some great comic relief moments. When Cheo goes into the local barber shop to get his hair-cut, his barber kids him about charging him double because of his “big head.” A guy sitting in a chair joins in, saying, “That is a double-priced head!” Yet the barber actually likes Cheo a lot and gives him the hair-cut for free, as a graduation gift. Cheo is graduating from high school.

A man enters the barber shop and begins to witness to them about Jesus. He tells them about being born again by his mighty Lord Jesus Christ. The barber wants no part of it and tells him to get out. Although the man had mentioned the cross of Christ, the barber tells him, “Now, get out of here with that.” The barber tells Cheo to not be like “that fool.” However, Cheo will eventually be told about Jesus again.

The realities of life and the hardships are featured, as Cheo and his brothers often don’t have enough to eat at home. When one of the brothers complains to their mother, she exclaims, ‘I’m already working two jobs!” He suggests she get a third one! She slaps him for his disrespect. One brother says he’s thankful for the food they have, which gets him a reply of, “We just had it last night!” He then receives a kick under the table from his brother.

There are some party scenes, especially after graduation, and a girl named Julie (Tina Torres), also known as “Sad Girl” sings while Cheo plays the keyboard. They are both quite good, as she sings about a guy “out there” known as the devil. A song used later in the film about one’s mission is spiritual and a very good song.

This leads to the producer from Deville Records reaching out to Cheo, but shortly after this Eli moves in, having stolen Cheo’s music. Cheo takes a downward spiral and begins to party a lot. He winds up down and out and is literally picked up from off the streets by two men who are working at a local mission along with Pastor Donna (Marsha Hovey).

Cheo is truly exposed to praying and the Bible for the first time, and soon he is looking at the Cross on the wall, praying, and wearing a cross around his neck. In an early experience at the center, not knowing better, he calls Pastor Donna “Pastor Jesus”! Cheo studies a lot and eventually becomes a minister at the men’s ministry center.

He reconnects with Blue and finally appreciates her, telling her that he knows he previously took her for granted. They plan to marry but then tragedy strikes, and Cheo will have to see how deep his faith goes.

This movie, although including the partying scenes, along with a few scattered instances of language, does a credible job in showing how the Lord can change a person’s life. It focuses on forgiveness, and moving forward, and there are some nice scenes between Eli and Cheo near the conclusion of the film. The movie has earned our Dove seal for Ages 12+.

Cheo is a film that will linger in your family’s memory, as it realistically portrays the hardships of life, but also offers hope in the Person of Jesus Christ.

The gospel is shared in a barber shop; a man’s life is turned around at a Men’s Christian center; church scenes; a man leads his friend to Christ.

There are brothers who correct a disrespectful brother; people at a Christian center help minister to the hurting and needy.

A couple goes into a room alone and apparently has sex (not shown) but the man later becomes a Christian; a man stares at a woman’s rear as she walks away and says he likes how she walks.

M/G; some utterances of the word “D*mn”; H; Frickin; Stupid; Crap; Shut up

A girl is sexually assaulted (a lot of it is suggested rather than seen); a girl dies on the street and police come to the scene; shoving between a few characters; a woman slaps her disrespectful son.

Drinking; smoking; the smoking of a pipe could include drugs; inebriated and “high” characters in a few scenes; one woman is an alcoholic.

Cleavage in a couple of scenes; a girl is seen in short shorts.

Tension and arguments between some of the characters; death and grief; betrayal.