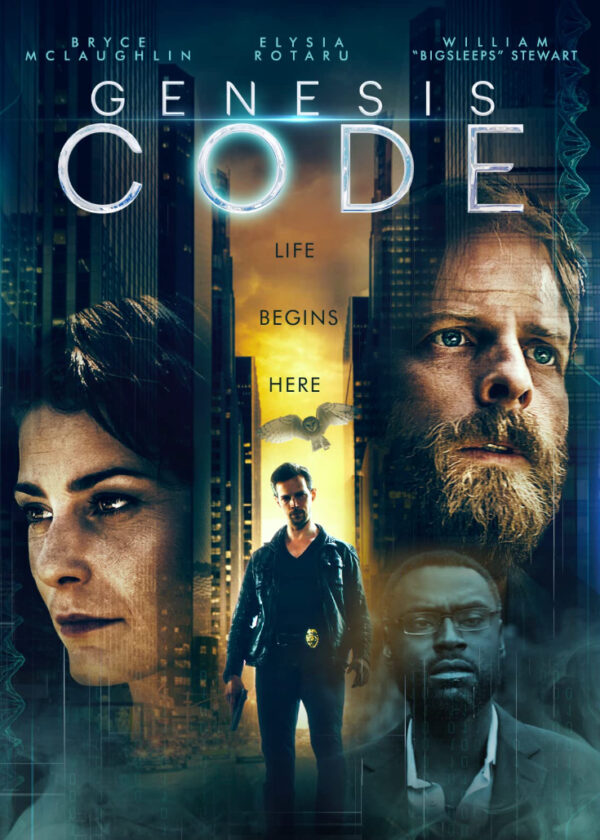 Framed for the murder of his wife, one man finds reconciliation through his dead wife, who guides him to evidence that will prove his innocence before time runs out.

Genesis Code tempts the viewer with a discovery by university scientists involving mysterious proof of the existence of God that everyone wants to get their hands on. David’s (Bryce McLaughlin) wife Abby (Elysia Rotaru) is found dead, and he is to blame, so while under house arrest he escapes, in an effort to prove his innocence. With the clock ticking, and doing a deep dive into secretive areas of his wife’s work, he discovers that she and her partner had stumbled upon something that is potentially life altering for the world at large.

On the run with nowhere to hide, David uses friends and family to exact his plans of discovery. With the bumbling duo of cops that he continues to evade, David follows the lead of his dead wife, who appears to him throughout the film. Menacing music and some shining moments by Bryce McLaughlin have the viewer of the edge of one’s seat at times wondering if David has lost his mind. While Abby is slightly provocatively dressed in a braless, low-cut bodice, she, herself, retains a mystical quality as slow motion is employed to compliment her sly glances toward her husband as he continues to follow her.

David engages in mild violence on a couple of occasions: one offscreen hit over the head with a baseball bat in order to overcome threatening obstacles, and a punch that knocks his victim out cold. Likewise, he lies and breaks the law by going on the run, taking the case in his own hands in order to expose the truth. The circumstances around Abby’s death are part of the surprise ending that sets the film up for a sequel, and the use of angels intervening and disguised as men, adds a mysterious touch to an already involved storyline. All this accompanies a creative means by which to convey the message that God is intrinsically involved in the lives of human beings.

This background narrative takes place on the radio that David is always playing, whereby the talk show host asks guests complex questions about God. The main topic of discussion is suffering and does God cause it, which ministers to David as he grapples with the loss of his wife throughout the film. These elements guide his steps and ultimately help restore David’s broken faith, as he struggles with acceptance, restoration, and forgiveness.

An intriguing presentation of how one man finds peace with God in the midst of his storm.

Main characters lie and break the law in order to prove innocence.

Guns held on people, one man punched in face, one man hit over head with baseball bat offscreen.