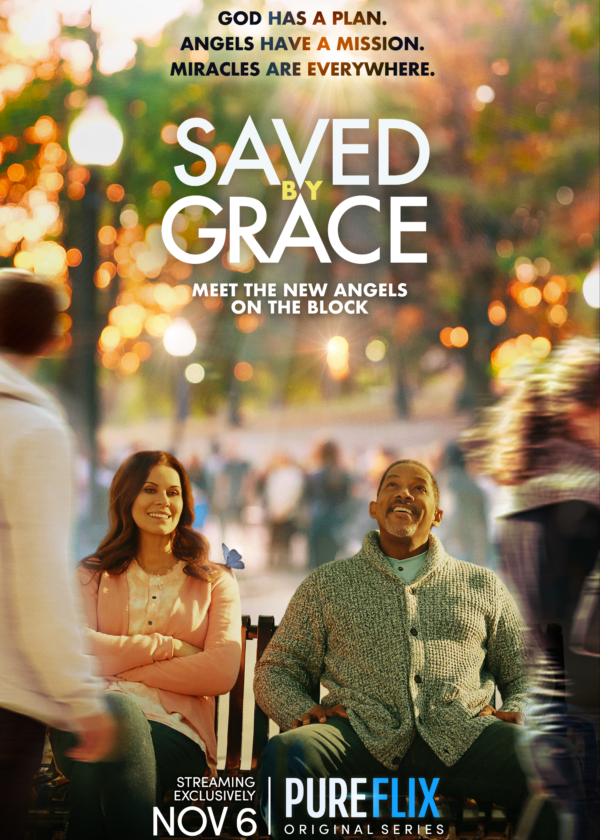 A retired police officer, despondent over the loss of his family, contemplates a dramatic decision which will change his life forever, until he meets a mysterious woman who, through her personal stories, gives him a reason to re-examine what is most important to him.

When a person reaches the end of their rope, it always helps to have a little divine intervention. The new series, Saved by Grace, debuting on Pure Flix on Nov. 1 centers on people in situations that are out of their control. They receive assistance from two of God’s angelic emissaries, Grace and Jeremiah, played by Jennifer Taylor and Cameron Arnett.

In the first two 30-minute episodes, each story centers on a different person or family in crisis, with Grace and Jeremiah randomly appearing at opportune times, as a hitchhiker, a kind homeless man, a teacher, and doctor, to name a few. They guide the characters through their situations, addressing their hurts and hang ups and urging them to let go and let God take the reins.

Forgiveness is a frequent theme, as hurt and bitterness drive spouses, and parents and children apart. The angels make a direct connection between the forgiveness of God and what He expects of us. “God loves all of you very much,” Grace tells a high school class, leading into an evangelistic message for the students before talking about how they should show love toward others. “Can we talk about God in school?” one student responds.

Some situations are more dire than others. Grace miraculously appears to a man intending to rob a bank, interrupting his plans, and gently leading him into a surprise reunion at a local diner. Later, she offers compassion for a father struggling with guilt from a tragedy he helped to create. “People make mistakes, but we have a loving Father Who forgives,” she says to comfort the man. The words of compassion could be something some viewers need to hear for themselves.

Saved by Grace, created and produced by Johnny Remo, seems to be an inspired update of the classic Touched by an Angel series that was a family-friendly hit for CBS for nine seasons. The production, acting, and stories of the new show should also make it a welcome, heartwarming watch for modern audiences and viewers of all ages.

Strong messages about forgiveness and salvation through Jesus Christ.

The characters in crisis who encounter the angels come out with stronger faith and restored relationships.

One character has a gun in his car with intentions to rob a bank.