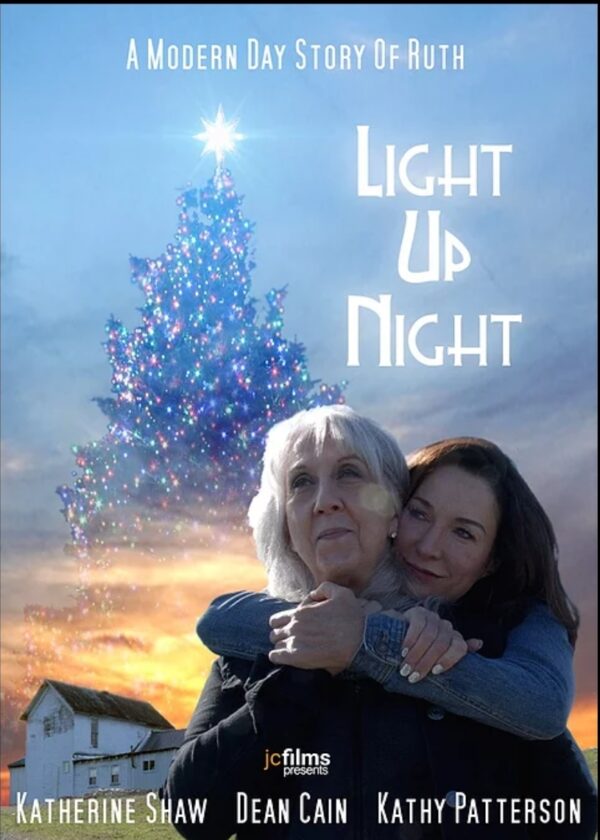 Based on the Book of Ruth, Naomi’s sons and husband have died and left her alone. Daughter-in-law, Ruth, vows to never leave her side. They face the challenges of a life on their own as they journey back to Naomi’s home in West Virginia.

This faith-based film is an inspiring modern take on the story of Ruth and Naomi. Ruth Starkey is played by Katherine Elise Shaw and Kathy Patterson plays her mother-in-law, Naomi Starkey. Naomi has already lost her husband and then she loses her two sons, and one of them is Ruth’s husband.  One dies of liver failure, and one is killed in a car accident after driving while inebriated. The family has lived in Las Vegas for a while, but Naomi wants to venture back to her home state of West Virginia. When Ruth insists on joining her, they begin the long trek toward the mountain state, also known as “almost heaven.”

Naomi learns when they arrive in Bridgeport, W. Va., that her sister, Judy, has died. She and her sister jointly owned the family home, but sadly it is in danger of being foreclosed, as Judy borrowed against it to help her pay medical bills.

This is after Naomi and Ruth have cleaned the house from top to bottom, sweeping, mopping, and cleaning anything that needed it. It feels like home but they are between a rock and a hard place in trying to figure out how to pay the debt on the home so they can keep it. But they have just hung a nice wooden plaque in the living room that says, “Great is thy faithfulness.”

Ruth winds up landing a job at a daycare and the pastor of the local church gives her a key so she can enter the church anytime she wishes to pray. Pastor Wayne is poignantly played by Michael Sigler. Naomi keeps the faith that God will provide what they need to keep the house. They come up with a plan to sell a lot of pumpkins to help toward the payments, but then the pumpkins wind up, despite their large sizes, rotting from within. Is there something wrong with the soil? Was it poisoned?

Ruth meets the local mayor, Boaz Perez, nicely played by Dean Cain, and there is an immediate attraction between them. But Ruth doesn’t want to own up to that. One thing that could upset any possible relationship is that, unknowingly to him, Boaz’s dad is a rascal, with an unsavory scheme up his sleeve. In a lighter moment in the movie, Naomi tells Ruth that she’s noticed that Mayor Boaz is handsome, which Ruth tries to shrug off, but she can’t help but grin. In a humorous line, Naomi tells Ruth that some people won’t let the truth stand in the way of a good rumor!

Despite Mayor Boaz’s father’s schemes, Boaz cares about Ruth and when all looks hopeless for Ruth and Naomi, God proves that He is, indeed, faithful. Could Boaz be the tool that he uses? And will Boaz and Ruth get together? Will Naomi’s home be saved? What happens after the traditional lighting of the Christmas tree lights?

This is a warm and touching film which offers hope to anyone who has ever lived in a suspenseful situation, wondering how a need would be met or how life could go on following a difficult test of faith. And the Christmas scenes at the end are wonderful. And in this version Ruth says to Naomi what her namesake did in the Bible, “Where you go, I go. Where you live, I live. Your God is my God.”

The film has earned our Dove seal for Ages 12+.

This inspirational film brings the story of Ruth and Naomi into modern times and does so nicely, in a way that will remind the viewer of God’s faithfulness.

The story of Ruth and Naomi is portrayed; Christian woman talks about praying for God’s provision and guidance.

A woman is determined to stay with her widowed mother-in-law; A man helps people out in a jam; a pastor cares for the people of his congregation.

A couple gets together but no kissing is shown; in an innocent scene a man and woman, both single, are sitting in church talking and they both fall to sleep, but someone implies they had a sexual encounter.

A wrecked car is briefly seen, in which a man lost his life.

A man drinks beer and bottles of alcohol are seen nearby.

Cleavage; a woman is in shorts.

A man plans to deceive people; a man is seen in a casino; a man admits to lying; death and grieving; tension between characters.