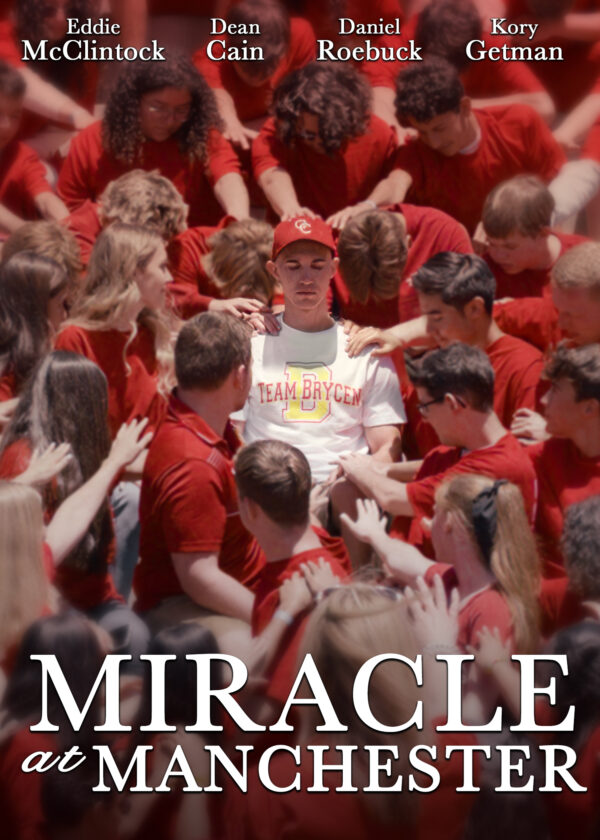 A community comes together to organize a miracle for a teen battling terminal brain cancer while two men find their own restoration in his healing journey.

Miracle at Manchester, based on a true story, is a must-see movie! It clearly makes a statement, and that is that miracles can still happen today. Based on events surrounding star baseball player Brycen Newman (nicely played by Kory Getman), the film features other solid performances from actors such as Daniel Roebuck as mechanic Ed Hanson, and Eddie McClintock as Brycen’s dad, Richard. McClintock also directed the film.

The film opens with a big baseball game, and Brycen winds up with a big hit and a big moment for his Cathedral Catholic baseball team, the Dons. In one scene, his girlfriend, Alexandra, or “Alex” as he calls her, stops by his locker to see if he’s “excited” about the big game. “Excited about the biggest baseball game in my entire life?” he asks. “Yes.” Brycen then walks her to class.

However, a short time later a terrific headache and a nosebleed could mean a serious problem for Brycen, and indeed it does. He has a tumor, and he must undergo surgery right away. Another plot in the movie circles around Ed Hanson, a mechanic, who works on veteran’s cars for free. He has a man show up who needs brakes and rotors, and Ed promises that, although he is overwhelmed with work, he will get to it. Ed’s wife, Marilyn, happens to work at the hospital where Brycen winds up, and all these events and characters end up connecting in some neat ways.

The Bible is nicely quoted in spots, including a passage from Hebrews 12 about being encompassed by a great cloud of witnesses, and running with patience the race that is set before us. Brycen will need a lot of patience for what he is about to endure. He undergoes surgery and the doctor, Dr. Getty (nicely portrayed by the dependable Dean Cain), tells the family he believes they removed the entire tumor. However, when the nose bleeds and headaches persist, it soon is sadly revealed that a part of the tumor remained and is growing again.

Meanwhile, Ed Hanson has a dream car, a 1967 Mustang, and he gets the opportunity to restore this car and finally own the car he’s always wanted. He mentions that it has some rust, the “cancer” of the car. This will play a part in the outcome of the movie as it’s soon learned that Brycen’s desire is to own a car. Ed’s wife, Marilyn, fills Ed in on what is happening at the hospital with Brycen. This movie does an excellent job in showing how God connects the dots and places people in our lives who can be a blessing to us.

The drama continues as it’s learned that Brycen will have to undergo chemotherapy and radiation treatments. When it becomes apparent that it’s not getting the job done, Brycen is scheduled to travel by plane to a treatment center in Florida as a last hope and last resort. At an outdoor gathering for Brycen, a minister and the entire school prays for a miracle for Brycen. We won’t spoil the ending, but the title of this movie might give you a hint of how things turn out.

The content of this movie is wonderful, showing caring and praying people – relatives and non-relatives of Brycen – who ask the Lord for a miracle for him. Several Bible passages are used and the loving relationship between Brycen and his father, and his girlfriend, as well as Ed Hanson, a stranger, makes for good storytelling and nice content for families. And it features the inspiring hit, “Fight Song.”

THINK ABOUT IT: There are terrific discussion points in this movie for parents and kids. Can we still pray for miracles? What happens when the answer doesn’t come immediately? Do we persevere in our prayers? The importance of having caring people in your life, family, and non-family members, is also an important discussion point. What do we do if a miracle doesn’t happen? Do we keep our faith? This remarkable movie has earned our Dove Seal for Ages 12+, due to its serious theme of a young man battling for his life, but parents should consult our content listing.

THE DOVE TAKE: Watch this one! It’s a wonderful faith-based film which pays off nicely with the conclusion and its 87-minute runtime flies swiftly by!

Several examples of faith including various Bible verses being quoted and prayer is offered up in Jesus’ name.

A stranger cares about a sick young man that he doesn’t know and works on a car for him; the Make-a-Wish Foundation gets involved with Brycen and his family to see if they can make a wish come true for him; the minister and students at the high school pray for Brycen; a doctor fights hard for Brycen’s life.

A man is shown sipping a drink of alcohol.

A family and friends struggle with why a good-hearted young man is battling a tumor; a young man vomits; a father takes his frustration out, verbally, on a doctor because of the doctor’s diagnosis, but then accepts the doctor is sharing the realities but that he is there to help the young man in any way that he can.