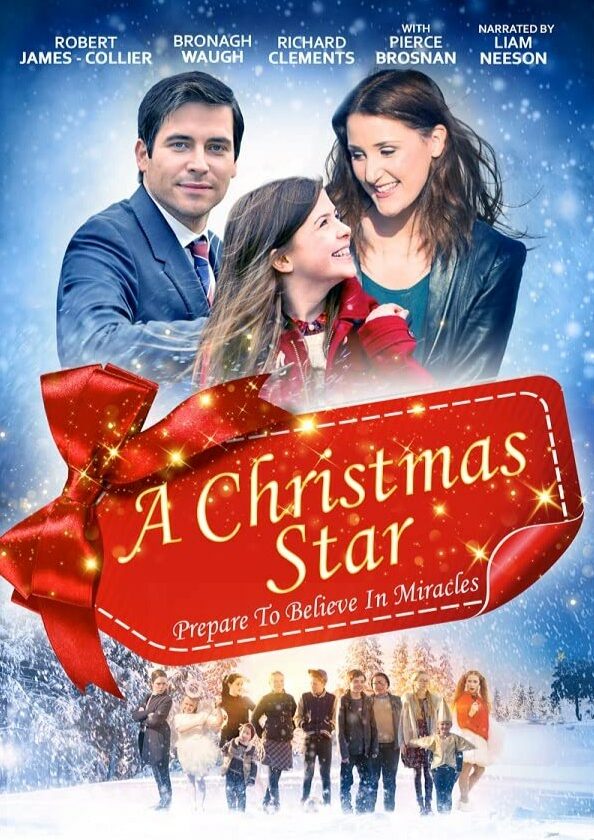 Noelle’s born on Christmas with the magical ability to make people stop fighting. Her dad’s workplace has problems and has to sell. The only buyer is evil.

This movie is filled with the Christmas spirit, as it focuses on love, the birth of Jesus, the magical time that the season is, and a special girl with an appropriate name for this movie, Noelle (nicely played by Erin Galway-Kendrick).

The movie starts off by diving into the Christmas season. We see a man with a flashing red nose as he is walking outside alongside lit-up Christmas trees, and we see a kid with fake reindeer antlers on his head! His mother is adjusting them.

There is humor peppered here and there in the movie. For instance, the narrator (radio announcer) is played by Liam Neeson, and he says that Christmas was always a time for giving, but “All I was given last year was the flu!”

The cinematography is nice, with houses with lights seen nestled to each other in one of the early scenes. And we see the birth of a young girl, aided by a woman after the parents’ car goes on the blink on them while en route to the hospital. The baby girl is born in a barn, reminiscent to the birth of our Savior.  She is named Noelle, as the date happens to be December 25.

And Noelle O’Hanlon is endowed with a gift. She can make people quit arguing and being upset with one another.  In one scene in the film, two shoppers are having a tug-of-war over the same item, and she gets them to stop, with one of the shoppers even offering it to the other one. And a “Happy Christmas!” is proclaimed. The movie is set in northern Ireland.

The gift of love is contrasted with greed, as a businessman named Pat McKerrod (Robert James Collier) is working for a greedy tycoon played by Pierce Brosnan. McKerrod is after the local business, Pottersglen Pottery, which in the past has made snow globes, but McKerrod wants to shut them down. He had nefarious plans for the local employer. McKerrod is also training his son, Junior, to be a schemer like himself and frequently tells him, “Man up.”

Noelle is close with her friends, and her family, her dad Joe (Richard Clements) and her mother Maria (Bronagh Waugh). Yet when Noelle attempts to use her powers of peace-making in business matters regarding the Pottersglen Pottery business, she and her father butt heads. He doesn’t understand that her gift to bring peace is not imagined, but real. And McKerrod is determined to close the deal and to obtain the business for his boss. And, if any snow globes will be made, he underhandedly plans for the work to be handled in China, not in Pottersglen. To offset the seriousness, we occasionally are given a scene such as the one in which we see the team spirt of the local cheerleaders, yelling for the soccer players (they call it “football” there), and one girl gets her pom pom in the face of another girl, who is none too happy about it!

Another nice aspect of this film is the featured songs, such as an energetic and more modern version of Hark the Herald Angels Sing. Another song, near the end of the movie, titled We Can Shine is another good one about the spirit of the season.

When it comes down to it, the movie is about love and forgiveness, as both are demonstrated in the various film’s scenes. And the film speaks of the birth of Jesus, and it is the theme of a play. And, in another comedic scene, Noelle attempts to see if her powers go beyond peace-making, and if she can multiply her food like Jesus did with the loaves and fish! And the radio announcer, speaking of miracles, humorously says, “Try working here for a week and see if you don’t need miracles!” And when the star in the sky in the local school play falls during a crucial scene, the laughs will continue.

There’s a bit of name calling here and there in the film, but it is typical of what you would hear among kids and families, and nothing is over the top. This movie focuses on the spirit of Christmas and has earned our Dove seal for All Ages.

This film does a very good job in showing that the greatest gift of all at Christmas time, and all other times, is the miracle of the gift of love.

Jesus’ birth and love is mentioned and a play about Jesus’ birth is given; the subject of the miracle of love is a theme in the movie, as well as forgiveness.

People forgive a man who tried to exploit them; kids make up with one another after having a falling out.

A man gives his son a slight push; customers wrestle over a store item.

Drinking in a bar in a scene and the mention of whiskey in the bar; in a humorous scene a girl tries to use her gift to turn water into wine, but fails.

Tension and arguments between a few characters; a man is hard on his son, and he tells him to “Man up!”