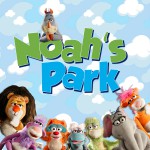 What happened to the animals when they left Noah’s Ark? They all went to Noah’s Park!

That’s right. Dreamer the rhinoceros, Honk the camel, Stretch the giraffe and five of their animal friends left Noah’s Ark and set off on a great journey to find a new home. After many perilous adventures the eight pals made their way through a brand new world until they came to a beautiful Pond surrounded by a Cozy Cave, towering coconut trees, and a sparkling waterfall. When Ponder the frog saw Noah’s Ark setting on the mountain above them, he knew that they had found just the right place. They had journeyed from the Ark to the Park to find the Ark waiting for them! They were home in Noah’s Park! Enjoy all 14 episodes as we watch the residents of Noah’s Park learn from each other and grow together as they deal with relatable issues like fear, insecurity and pride; while also learning valuable lessons of honor, friendship, cooperation, forgiveness and the Golden Rule. the heartfelt stories, lovable characters and their hilarious antics, your child will learn who God is and how much He loves each and every one of us.

Welcome to Noah’s Park! After leaving the ark and looking for a home, animal friends Ponder the frog, Dreamer the rhinoceros, Stretch the giraffe, and many others found a new home in Noah’s Park, where musical numbers, moral lessons, and growing friendships all breathe as one. Noah’s Park may well be a home for eager children as well.

In the first episode, “Carny-val,” the gang wants to celebrate and honor the fourth year anniversary of Noah’s Park by building their very own carnival. Not without trials and tribulations, each animal learns that they have their own incredible, unique gifts—even Screech the monkey, whose frequent antics end up helping him discover his ability to find luminous rocks in secret hiding places. In “Screech and the Golden Apples,” we learn about God’s Golden Rule of treating others as you would like to be treated. Screech manipulates the elephant named Ivory into doing chores for him in exchange for apples—her new favorite snack (and she has many!). But when the tables are turned on him, Screech realizes, with the aid of Ponder’s wisdom, that everyone deserves to be treated kindly in Noah’s Park, and furthermore, in God’s kingdom. “Noah’s Park,” which is based upon the popular children’s book series by R L Hays, brings this cast of characters to life with a lot of joy and a lot of heart. The series stays attuned to a variety of characters—nobody overshadows the others. Each animal’s personality is equipped with gifts and challenges to overcome. Children are guaranteed to learn about how they can discover their own unique gifts, just like the animals in Noah’s Park, over the course of fourteen episodes. The show features adorable characters, toe-tapping music, and relatable stories that teach children about God. In “Noah’s Park,” we celebrate how every day is a life lesson to us from God. Entertainment and relatable biblical references meet in this highly enjoyable show, which Dove is proud to award the Seal for All Ages.

Sex: None
Language: None
Violence: None
Drugs: None
Nudity: None
Other: None