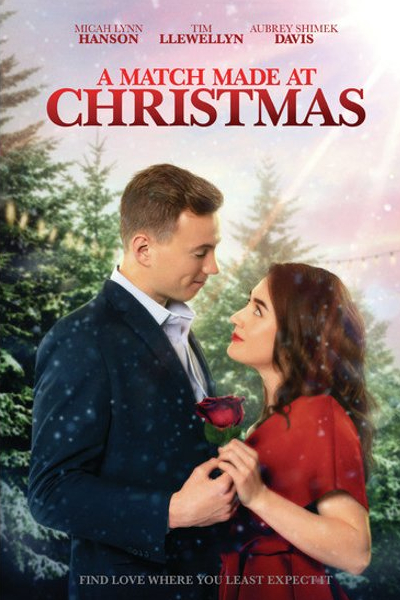 A Match Made at Christmas

Romantic, small-town girl Holly, and realist, career-driven, Chris aren’t a likely pair, but when ‘matched’ together by Holly’s all-knowing great-aunt, they don’t seem to have much of a choice.
7
Negative Rating
12345
SexLanguageViolenceDrugsNudityOther
3
Positive Rating
12345
FaithIntegrity

This unashamedly romantic movie is overflowing with a lot of good elements which make a good movie: likable actors, Christmas music, and a bit of tension and romance.

Micah Lynn Hanson portrays Holly Everton, a woman in her twenties who runs her deceased dad’s bait shop, and she also helps run the family’s Holly Lane Tree Farm, which serves up a lot of Christmas trees every holiday season. Holly has longed to travel but she feels a loyalty to her dad’s memory and just keeps showing up at the business he started.

Holly’s great aunt, Aunt Lillian (Juli Erickson), has been spot-on in seeing what men and women were going to wind up together. She says that many of them can’t see what’s right in front of them. And she has been unbelievably accurate, stating certain young men and women would wind up together, and then they did! She even forecasted Holly’s brother, Spencer, winding up with Holly’s good friend, Angela, and indeed they do end up together, even engaged. Her “pairing up” of couples has been uncanny. Holly not only longs to travel, but to find her soulmate as well. But so far, it hasn’t happened. As she says, “That day hasn’t come yet.”

Enter Chris Whitaker (Tim Llewellyn), a self-assured businessman who has a marketing background, and doesn’t like Christmas. He thinks it’s a marketing ploy a lot of stores use to get people emotionally excited, so they spend money. He and Holly meet and bump heads immediately. And then, of course, Aunt Lillian predicts that Holly and Chris will end up together, but not if Holly has anything to say about it!

There are humorous moments and jokes in the movie, which gives it a break from some of the tense moments between certain characters. In one scene two buddies see each other, and the one says to the other, “Wait, you’ve got something on your face. Oh, it’s your face!” And Holly and Chris endure some awkward moments from various characters, who anxiously wait to see if they really will become a pair. One particularly awkward moment happens when both Holly and Chris find themselves standing under the mistletoe. But they can’t seem to get past butting heads with one another.

The Christmas music is outstanding, focusing on a merry, merry Christmas for loved ones, and it offers hope that perhaps Holly and Chris will find a way to become civil with one another. However, it only becomes more tense when it’s learned that not only is Holly going to be Angela’s maid of honor, but Chris is going to be Spencer’s best man. Holly and Chris will have to walk down the aisle together!

But it would seem some of their opposite views tend to be a help to each other. Chris helps Holly improve the look of her website, and Holly encourages Chris to get in touch with his mother. She wants him to come home for Christmas and he can’t, but he continues to ignore her phone messages. Holly encourages him to at least text her, and despite some difficult family moments of the past, Chris and his mom began to make strides in their relationship. Every time Holly and Chris are seen together, they are asked, “Are you going out?”

If opposites truly do attract, and these two are definitely opposites, then do they have what it takes to compliment and help one another? The drama continues with the two finding common ground, and Holly’s mother helps her to realize that it might just be time for Holly to let go of her dad’s business. And, despite Chris telling Aunt Lillian she is wrong about Holly and him, is it possible that he is the one that is wrong? In a cute scene when Chris helps Holly bake cookies, they throw flour at one another and he puts frosting on her nose, and it becomes obvious that their feelings are shifting. We won’t give the ending away, but this movie is a good watch, with fabulous outdoor scenes and the Christmas decorations and music adding to its warm atmosphere and settings.

With various themes of forgiveness, and accepting people’s differences, the movie has earned our Dove seal for Ages 12+. It includes some tense moments, and disagreements, with some drinking scenes, but parents should consult our content listing to decide if they are comfortable with their children a bit under the age of 12 watching it. It is definitely not a film geared toward young kids.

This holiday movie will have you rooting for love and it shows what can happen when people forgive one another.

A woman helps a man make peace with his mother; forgiveness is shown after a woman realizes she was trying to make her friend’s wedding like the one she actually wanted; a mother wants her daughter to live her own life, and not just keep a family business going.

Drinking in scenes; the mention of vodka soda and taking shots at a bachelorette party.

Tension between various characters; arguments; a woman runs back and forth between a party and a dinner date, deceiving a few people, and causes hard feelings.