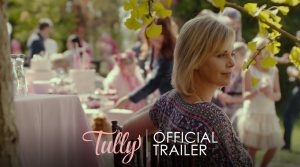 The film is about Marlo, a mother of three including a newborn, who is gifted a night nanny by her brother. Hesitant to the extravagance at first, Marlo comes to form a unique bond with the thoughtful, surprising, and sometimes challenging young nanny named Tully.
Watch Trailer
Watch Trailer
16
Negative Rating
12345
SexLanguageViolenceDrugsNudityOther
2
Positive Rating
12345
FaithIntegrity

Just over ten years ago, Diablo Cody wrote (and won an Academy Award for) a quirky little independent film we all now know and love called Juno (2007). Yes, ten years of life, and with it, the writer of any film is subject to change their worldview. It began gradually in 2011 with her underrated Young Adult, where quirkiness subsides into the weak outside layer of the film, just before a darker, more funny/painful look into the realities of life.

Teaming up with director Jason Reitman once again, Tully brings Cody’s signature agony into the comedic light, taking on motherhood and it’s many, many trials. One aspect of the film’s screenplay that works so well is that it begins with characters who talk about Marlo (Charlize Theron), the protagonist, about how she is and what she has lost, while Theron is put up to the challenge of acting out this pain through the physicality of her performance. The real scene stealer, however, is Mackenzie Davis, who plays the night-nanny Tully. More than taking care of Marlo’s newborn baby by night, Tully is further there to return Marlo’s wholeness to herself. It does not go without pain and splitting humor that Marlo has lost herself in maternity, and in the course of the film, audiences are encouraged to consider what being a mother really takes – and what it takes from you, sometimes. This is a great film to empathize with and discuss with others, although it does not meet Dove criteria for approval.

A car accident - nothing bloody or graphic, but startling

A car accident - nothing bloody or graphic, but startling

Some images of bare breasts (in context of maternity)