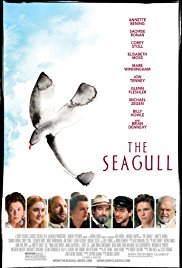 An aging actress named Irina Arkadina pays summer visits to her brother Pjotr Nikolayevich Sorin and her son Konstantin on a country estate. On one occasion, she brings Trigorin, a successful novelist, with her. Nina, a free and innocent girl on a neighboring estate, falls in love with Boris Trigorin. As Trigorin lightly consumes and rejects Nina, so the actress all her life has consumed and rejected her son, who loves Nina. The victims are destroyed while the sophisticates continue on their way.
Watch Trailer
Watch Trailer
9
Negative Rating
12345
SexLanguageViolenceDrugsNudityOther
0
Positive Rating
12345
FaithIntegrity

This film is adapted from a famous Chekhov play and is true to form. Herein lies a series of love affairs and triangles that are Shakespearean in fashion and are embodied by four artists on a spectrum from famous to unsuccessful. The famous actress Irina (Bening) visits her ailing brother Sorin (Dennehy), with her famous writer boyfriend Boris (Stoll), who is attracted to Nina (Ronan) the young, ingenue neighbor, who is loved by Irina’s son Konstantin. This is a piece written in the true spirit of the Romantics as Konstantin (Howle), a young tortured artist, is on the verge of some kind of clinical depression, attempts suicide on a number of occasions, and this is portrayed as tragic yet noble in some way.

These love triangles even extend to a mother/son complication as Irina’s and Kosntantin’s relationship tends to challenge what is ensuing between Boris and Nina for passion and tragedy. Konstantin is constantly striving for the attention and approval of his mother, while she shuns him and refuses to validate his successes as they threaten to challenge her limelight and prestige. This, coupled with his rejection from Nina, sends him spiraling into a depressed state that leaves him despondent and suicidal. Chekhov’s characters are typically fully round and complicated and those in The Seagull are no exception. Although all the players are at the top of their game, Bening shines by giving a winning performance as a vulnerable, aging, famous actress, played in the spirit of Norma Desmond from Sunset Boulevard. Likewise, Ronan and Howle are believable and passionate in their interaction, where she is obsessed with his fame and gifts as a writer, and he is intrigued by her innocence and focus on him. Irina is in charge, however, and pulls Boris away to the city, ending the budding love affair. Sometime later they all return to Sorin’s estate and recount the last two years of their lives: Boris left Irina for a full blown affair with Nina, who miscarried their baby, and Nina and Konstantin reconnect where she finally recognizes the metaphorical significance to the seagull Konstantin had killed and gifted to her earlier on. Boris returns to Irina and the movie ends tragically as Konstantin finally succeeds in taking his life due to his melancholic state brought on by his supposed artistic temperament and the constant rejection of the women in his life. In the end, the elite seem to outdo the less privileged as Irina and Boris thrive into their future, while the lesser characters struggle to self-actualize into their particular places and purposes. This chasm further highlights the existential crisis these lesser characters, especially, engage in as they constantly muse about life and put on plays for one another in an attempt at self-exploration and realization. Ronan in particular comes to understand that it is not by achieving anything specific, but more by the sheer sake of perseverance that makes her life worth living. Due to the focus on out-of-wedlock affairs and suicide, we are unable to award this movie the Dove Approved Seal.

There are two attempted suicides. While neither is exceptionally graphic, one involves a shotgun and is mostly shown on-screen, with a resulting blood splatter on the wall

There are two attempted suicides. While neither is exceptionally graphic, one involves a shotgun and is mostly shown on-screen, with a resulting blood splatter on the wall

Frequent use of alcohol by main characters