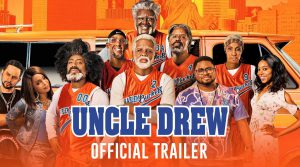 After draining his life savings to enter a team in the Rucker Classic street ball tournament in Harlem, Dax (Lil Rel Howery) is dealt a series of unfortunate setbacks, including losing his team to his longtime rival (Nick Kroll). Desperate to win the tournament and the cash prize, Dax stumbles upon the man, the myth, the legend UNCLE DREW (NBA All-Star Kyrie Irving) and convinces him to return to the court one more time. The two men embark on a road trip to round up Drew's old basketball squad (Shaquille O’Neal, Chris Webber, Reggie Miller, Nate Robinson, and Lisa Leslie) and prove that a group of septuagenarians can still win the big one.
Watch Trailer
Watch Trailer
15
Negative Rating
12345
SexLanguageViolenceDrugsNudityOther
6
Positive Rating
12345
FaithIntegrity

There is a great line near the end of this movie which sums up a big part of the film’s message. Dax, a coach, who once had his big-moment shot blocked in a thrilling game, is facing a huge moment in the new big game. He has a chance to make the winning shot while guarded by the same player who had previously blocked his big shot—his chance to seize redemption was at hand. Wise old streetball player and streetwise Uncle Drew tells him to take his best shot. “You miss 100 percent of the shots you don’t take,” says Drew.

Of course, a lot of the fun and relevant moments feature the former star players, now in their 70s, coming back together to attempt to find the old magic and to relive the glory moments. Dax is their coach but steps in to play when a player is injured. This team features Uncle Drew, Preacher, Boots, Lights, and the Big Fella (played by Shaquille O’Neal) and there is no need for special effects to make the Big Fella … well, big! It is a nice move by the filmmakers to show why each player needs to play again just one more time. Boots had lost the will to live but is more than happy to play with his old teammates again. Preacher hasn’t played in a long time and can’t wait to get back to the basketball court. Lights is legally blind, but the old goggles Uncle Drew brings him, with a special prescription, helps him see much better. And Uncle Drew desires to show the next generation the way to really play the game with respect. And he and Big Fella need to put the past behind them. The team’s former glory included shooting their way to the finals of the very first and now annual Rucker Classic Tournament. This team from the 60s is ready to rock it again in 2018! And their new name? The Harlem Money. The bets placed on them might be a long shot—or will it?

But there is something huge, more than age, that this team will have to overcome. Years before, a big misunderstanding occurred between Big Fella and Uncle Drew. It had to do with Big Fella’s girlfriend, who eventually became his wife. And until it is fully resolved, a big elephant keeps showing up on the basketball court. In 1968, the team fell one game short of winning it all when Uncle Drew didn’t show up for the last game. Now, another huge game is on the line—not only for the old guys, but for Dax. Dax’s old nemesis, Mookie, not only blocked his big shot but wound up taking his former talented team away from him to coach—and Dax’s girlfriend to boot. But so much is within his grasp now, including the possibility of a future with Boots’ granddaughter, Maya. But can Dax put the past behind him and come through in the ginormous moment when the spotlight is shining on him?

The Dove Take: Make no mistake about it—this movie has some laugh-out-loud moments. When the old guys do a modern dance together on the dance floor in a bar, it is difficult not to split your sides laughing. And when Uncle Drew takes on a young punk in a streetball game early in the movie, it is rewarding to see him put the young and brash player in his place. However, is the content worth putting up with to see the film? It features several uses of vulgarities, including Jesus’s name in vain, as well as other uses of language. It falls short of using the F-bomb but comes close, such as when “Mother…” is uttered.There are a few sexual innuendos and one brash basketball opponent of Dax’s moves in with Dax’s girlfriend right after she kicks Dax out. It also shows one player’s nude behind (twice). This one does not earn our Dove Seal. Despite some good themes, it is not a slam dunk in the family-friendly department.

A preacher baptizes an infant; a church scene in a lively worship service; the mention of God and faith in God

Some shoving; a woman takes after her husband with a baseball bat when he leaves with the team

Several vulgarities and profanities including "J"; OMG; S.O.B.; Da*n; A**; H*ll; Several slang uses of a word for male genitalia which is directed toward Dax; a slang word for male testicles; a "BLANK YOU" comment (beeping noise)

Some shoving; a woman takes after her husband with a baseball bat when he leaves with the team

Prescription pills are taken; the mention of a "blue" pill (Viagara); drinking in a bar

Tension between characters; a few players have tattoos; in a spoof a preacher baptizes a baby, putting him underwater; the church service is extremely lively; a few references to "whites"