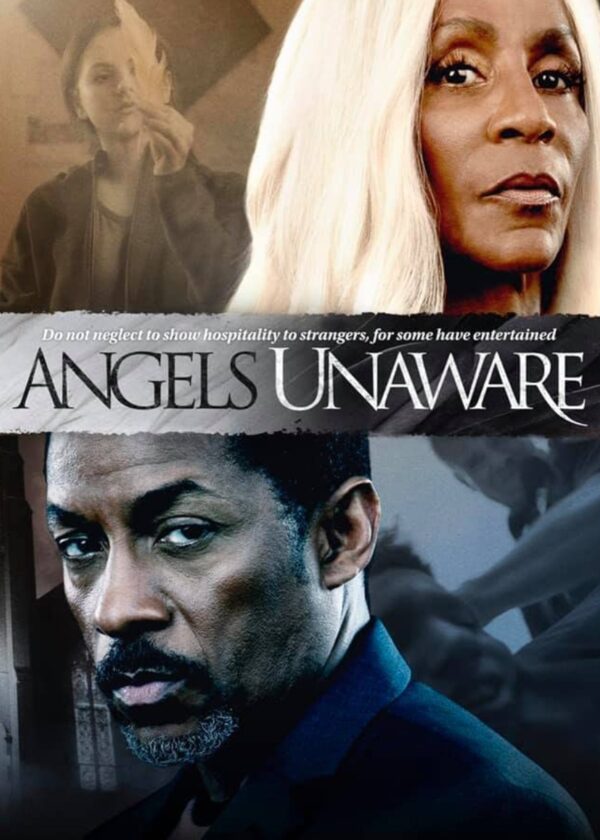 Beginning with an enchantingly beautiful intro, Angels Unaware draws us into the hidden, supernatural world of angels and demons. The film portrays the timeless, cosmic battle, the confrontation between good and evil. This night, the age-old battle manifests itself in an unjust killing of a peaceful protester and the coverup by a corrupt, enmeshed police department, in a culture called The City. Using and nurturing the ensuing disdain between people groups, Lucifer (Cameron Arnett), the father of lies, has orchestrated his chess game to subvert and harm God’s most loved Creation, mankind. The story is told by Eden (Karen Abercrombie), Lucifer’s sister, who has been directed by the Lord to thwart Lucifer’s plans.

Certainly not by chance, activist Randolph Park (Keon Rahzeem Mitchell) and Officer MacDougal (Pat Dortch) are thrown together in an abandoned warehouse, while outside there’s a storm brewing.  Without warning, a small, homeless black lady pushing a cart, appears in a doorway, introducing herself as Eden. Something is gravitating about Eden, causing the men to stay in the dank warehouse- perhaps it’s her disregard for the gun Mac has brandished. Could be there’s a storm brewing. Or perhaps they find it eerily compelling that Eden knows their names and proceeds to remind both Randolph and Mac about their abuse growing up, at the hands of their fathers. She announces they are more like each other than they know.

She listens as Randolph confronts Mac, accusing him of being part of a rancid City system that protects those who abuse power. She vehemently charges Randolph to lead protests, but only if they are peaceful. “Without the fires, without the violence, without the looting,” she implores.  She turns and pleads with Mac, “And you were born to do good!”

A page turns for Mac and he confesses his original desire to be the good cop, but instead became a coward. Recognizing his internal struggle, Eden promises that the truth will set him free.  The truth, in this case, is in Mac’s pocket, contained in one small thumb drive.  If made public- if Mac chooses good, it will destroy Lucifer’s plan to keep power-hungry killers in their human offices.  Will Mac do good?  The men turn to Eden, but she is gone.

Meanwhile, Lucifer has been preparing for his infiltration of the Church, planting seeds of doubt wherever he can.  Cloaked as the town’s very handsome, friendly judge, he stops to give discouragement to Pastor Mann (Brian LaFontaine), a hardworking, diligent pastor. But there’s a storm brewing. He moves on.

A subtle character in the film, Sophia (Isabella Frommelt), has been tracking angel activity for a long time, collecting black feathers left at angelic scenes.  On this night she witnesses a homeless woman (Eden) fight off two thugs, with one swing of the arm. Back at her tiny apartment, Sophia pulls a disheveled, white feather from her purse. “I was right. She’s here.”

Eden, now clothed in brilliant white, approaches the heavy doors of the church, and is met by Sister Anne (Candace Kirkpatrick) who adoringly tells her the angelic rank has been ready and waiting for centuries. She comments there’s a storm brewing.  Eden acknowledges, “The storm is already here.”

Very soon Lucifer himself arrives at the church doors, bringing flowers to his sister.  Wanting into the Church.  Eden rejects his every passionate, sorrowful appeal and closes him out, causing Lucifer to throw a cosmic conniption fit on the stairs of the church.  (My favorite part)

Angels Unaware is very well directed and acted, even the minor roles. The casting is spot on.  And by strategically using fore, middle and deep space, the cinematography makes the theatre-like blocking and long cuts more interesting. Overall, the creative crew utilizes skills, talents and ‘hammer and nails’ to build this intriguing film.  Still there are a few continuity errors in the film, and some sub stories and characters are left dangling. On the practical side, Mac, aiming a gun, both at Randolph, and at himself is not for younger children.

This is a film of importance. No matter which people groups are involved, it is a solid message of hope to our time and civilization, promoting peace and truth over violence and lies. Kudos to Ms. Abercrombie. Dove awards Angels Unaware  Approval for Ages 12+.

Angels Unaware is a timely film, exploring what freedom could happen if our culture adopted peace over fire and truth over persecution.

There is a full understanding of an angel’s (Eden’s) role in the film, talk of a nebulous God, but no talk of the Gospel or one’s identity in Christ.

Eden is on a God-given mission and won’t be shaken.

Characters wrestle over a gun.  Many shots of man holding a gun, once to another man’s forehead, once to his own temple.

Production quality is quite good.