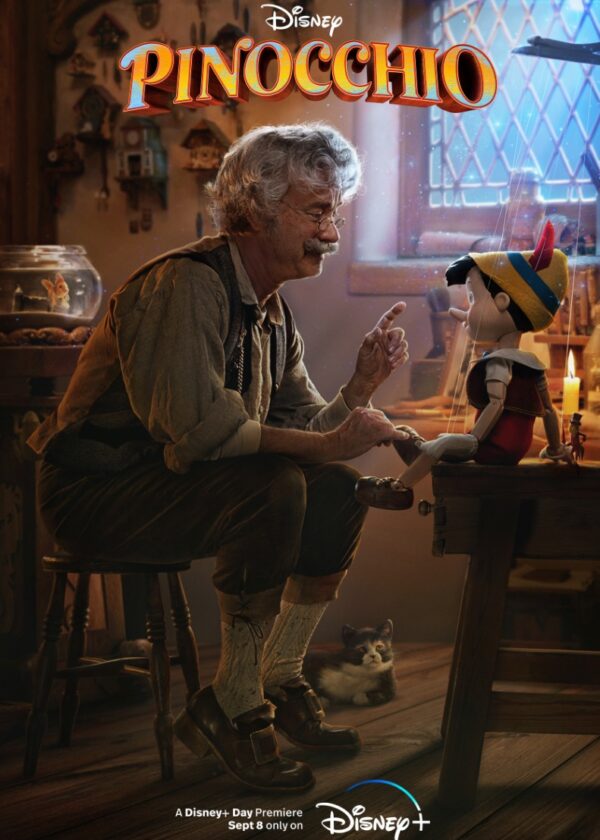 A puppet is brought to life by a fairy, who assigns him to lead a virtuous life in order to become a real boy.

The love of a father is a powerful thing. Geppetto has lost his son and family and creates a wooden boy out of his grief and longing for what he has lost. Seeing a special star in the sky, he wishes from his heart, and magic begins to happen.

The recent Pinocchio by Disney is a remake of the classic, and we get Jiminy Cricket as the narrator. The Blue Fairy has explicitly promised Pinocchio that he can become a “real boy” if he proves himself brave, truthful, and unselfish, and Jiminy finds himself tagged by the fairy to help the newly alive wooden boy distinguish right from wrong on this quest. Geppetto is ecstatic that his wish has come true, Pinocchio is alive.

The rest of the movie is a morality play, where Pinocchio is tempted by fame, fortune, and pleasure, with Jiminy Cricket trying to keep up and steer the boy right. We get many of the classic moments from the original with some new characters and songs thrown in.

While the effects and cinematography are phenomenal, fans of the original may not appreciate the new characters and songs. The film is full of popular actors for live action and voices for CGI characters. Keegan Michael Key is great as the fox, and Luke Evans shines as the coachman toward the end. Of course, Tom Hanks is fun as Geppetto. However, the dialogue is simple and other voices are awkward. Fabiana/Sabina is a great new character and serves the story well. As with most of the “live action” Disney remakes, however, fans might simply want to watch the original.

There’s minimal to no negative content, other than the “[email protected]” which is from the original animated scene. The main issue for many parents might be how they changed the ending to give a more preachy progressive idea of identity instead of the original, and powerful, idea of death and rebirth.

Pinocchio has fun moments in a remake of the original classic, but with problematic changes to the powerful theme, some parents might have concerns.

Pinocchio is essentially a morality story, and Pinocchio must learn to do what is right in the face of temptations, namely fame, fortune, and pleasure. Very positive story of the love of a father to a son.

(“[email protected]” used in the classic line from the original.

A little hint of Stromboli being drunk, “root beer” is used similar to beer.