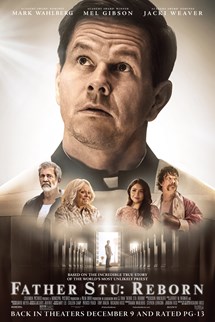 Stuart Long was a man looking for love and a purpose . . . and he found God.

Stuart Long was a man looking for love and a purpose . . . and he found God. Growing up under the shadow of his deceased younger brother, he is starved for love and attention. His relationship with his grieving mother is strained and his father is nearly out of the picture. He fills the void in his heart with boxing, a failed acting career, and odd jobs before chasing an attractive girl who leads him to church. There, the unconventional disciple finds Jesus and his life is transformed, not always for the better. He encounters a variety of obstacles on his way to fulfilling his call to become a priest, but ultimately finds the most difficult one of all, a devastating health prognosis. Even dealing with constant disappointment, Stu remains resilient and determined to serve God and share the gospel with others.

Father Stu: Reborn (a PG-13 version of the R-rated film Father Stu released earlier in the year) is the longtime passion project of its star, Mark Wahlberg, who has expressed his desire to do more work reflective of his Catholic faith. As such, the film succeeds in presenting the gospel through the real-life Stu’s own words and journey. As a boxer and as a man finding his way, he takes a lot of punches without throwing in the towel. Every blow makes him more determined to succeed. Stu is led to Christ by his crush on a young woman working hard in a local Catholic church. He is baptized in order for her parents to allow them to date and will do whatever it takes to win her affection.

As he continues on his path, God works on his heart, drawing him closer to a true faith. In a bar one night, he encounters a mysterious stranger—Stu later believes to be Christ—who warns him against driving. When he ignores that advice, a wreck nearly takes his life, and he sees a vision of the Virgin Mary calling to him. Stu then reveals to his family what he feels God is directing him to—a life in the priesthood. Even his religiously devout girlfriend doubts his sincerity and his parents are dumbfounded. Rejected by the seminary, he doesn’t let up until he’s allowed to enter the ranks. His final challenge is a surprising and devastating health prognosis that forces him to question whose side God is really on.

In his darkest hour, Stu agonizes with God. “You love me but you don’t want me. You gonna test me to see how serious I am? I want to know why. Why!?. . . I’m here and I want to do right and I want to be good.” Ultimately, he makes peace and pledges his service. “I’m here.”

Through every step, Stu’s life impacts those around him, not only his unbelieving and hard-hearted father, but also the religious types in the seminary and the church. His fellow believers come to know and love him, even though he doesn’t have all the right answers and doesn’t always follow the right protocols.

For believers, there’s much to learn through Stu’s journey, especially as it concerns suffering and following God. For those who think a Christian life will lead to better things, this story shows that doesn’t always happen. Sometimes one’s faith sets them on a seemingly unwinnable path of isolation and hardship. Stu’s optimism and resolve are inspirational nuggets the viewers can glean from. What if God called you to do something that everyone, even your closest friends and family members, said was crazy? Do you live to please God or to please men and women?

This film was released earlier in the year with a R-rating taking a more unflinching and irreverent look at Stuart Long’s long and bumpy road toward the priesthood. This was mainly because of more colorful language than what’s been whittled down to get a PG-13 rating and more explicit mentions of sexual activity. Some of that is still present, along with some physical violence.

The film is a true-life sermon and even contains a folksy evangelistic message by the main character during one of the segments. Characters struggle with God’s forgiveness and mercy and respond to the call of God to represent Him.

Stuart Long’s life is impacted greatly by his spiritual transformation. He continues to struggle in some areas, but as he grows and matures as a believer, he’s able to lay aside those habits more easily.

Stuart starts off as a boxer and matches are shown. He also punches a statue of Jesus early on and punches a guy at a bar.

In two scenes, Stu shows off his muscular physique, once at a baptism.