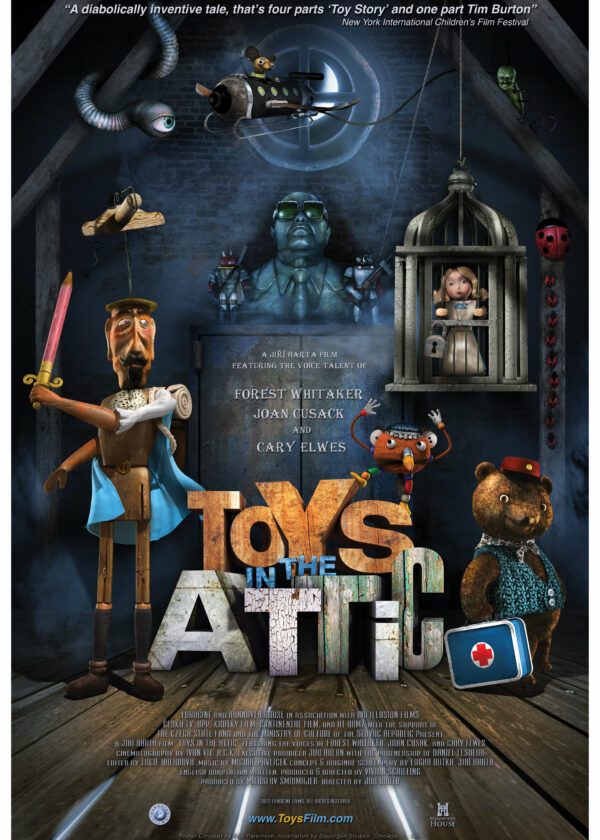 Toys in the Attic

A teddy bear, a mechanical mouse, and a marionette join forces to save their kidnapped friend, Buttercup the doll, from the denizens of the Land of Evil.

This movie reminds me of a creepy version of Pixar’s Toy Story. It is imaginative, creative, but this one is decidedly dark in places. It’s not for young kids. It’s dubbed by American actors such as Forest Whitaker and Joan Cusack, and it was released as a Czech film in 2009. Its main theme is the rescue mission for a kidnapped antique doll named Buttercup. From the Land of Evil, a cruel head (like a bust) smokes, and wants to have Buttercup in his clutches. He apparently is the Head of State. Due to the smoking and creepy crawlies, not to mention a few scenes of violence, this one is intended for an older group of viewers, 12 and up.

In the opening sequences we see an attic of discarded junk, and the pretty doll Buttercup lives in an old trunk with her friends Teddy Bear, a marionette named Sir Handsome, and a mechanical mouse. But they will soon face menacing creatures, including a very creepy centipede with a human looking face and he has a mustache. A toy which is melted adds to the eerie atmosphere.

There are humorous moments including a scene in which a tiny creature talks on a big phone. And a one-eyed mechanical creature adds to the creepiness, but it is amusing to watch. Chess pieces do battle and there are planes and trains for those who enjoy watching animated versions of these inventions. The interchange between some “live action” moments and the animated scenes are an interesting contrast, although the animated scenes are more frequent in the film. Buttercup holds her own, hitting several creatures (which seem to be beetles) on the head with a spoon!

Another fascinating scene involves the moment when there are several Buttercups on screen at the same time. Which is the real one? And several close calls ensue, such as when a few creatures are almost drowned. The film is unquestionably strange but entertaining. It might remind you of a nightmare or two you have had in the past! Yet, the personality of the toys and creatures are strongly executed by the filmmakers. In another humorous scene, the teddy bear train conductor works in a nap after shoveling coal into the train’s furnace. The teddy bear also takes care to brush his teeth, which is a nice lesson for young viewers.

The film features lively music and I think I correctly heard both French and Spanish accents, along with the English dialog. And, one certain character resembled Mr. Potato Head from Toy Story.

We won’t spoil the plot, but we will tell you that there is a birthday celebration at the end of the film. As stated earlier, this creative and imaginative movie is more suited for ages 12+.

For kids and families, ages 12 and above, this unique movie is filled with interesting characters and creatures, and you might think you dreamed some of it in a mild nightmare!

A toy is melted; some scenes of mild violence such as a character hitting creatures in the head with a spoon; a few creatures are squished.

A character smokes in several scenes.

Some scary moments as certain characters are on the run for their lives; creepy images.