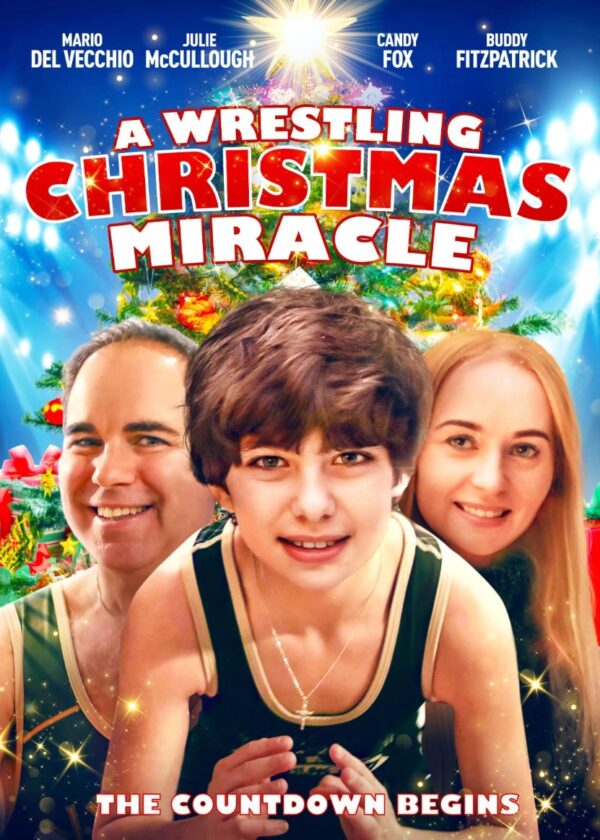 Here is a movie that is a bit quirky, and unique in its comedic approach. It features several well-known actors, including Scott Schwartz (Flick from A Christmas Story), Gilbert Gottfried, Martin Kove, and Jimmie Walker (Good Times). Young Kace Gabriel (Mario Del Vecchio) is a young sensational wrestler in school, and his dad, Ajax (Ken Del Vecchio), his mentor, takes a trip to the Congo to go on a wrestling tour. Kace is believing for his friend, Charlie, to wake up out of a coma on Christmas Day. Kace visits him often.

There are some funny lines in the movie, such as when the character of Kitty Kat says, “We have the right copy,” instead of “We have the copyright.”  Kitty Kat and her companion Chuck have stolen a hard drive and the movie that Kace had made for his friend Charlie. Now Chuck and Kitty Kat are ransoming it for a lot of money from Kace and his parents.

Scott Schwartz is a stand-out in the film, with some funny lines and he plays a dependable friend, although his character takes an unexpected turn near the end of the film. And will Charlie wake up on Christmas Day? And will Kace’s family get his movie back?

Some of the jokes fall flat here and there. But others land. For example, in one scene a couple is going to give a man a Christmas gift. He replies he always celebrates Valentine’s Day on Christmas! And Martin Kove, who was in “Cobra Kai”, is mentioned and the term “Cobra Cow” and “No mercy!” is yelled near him. And, footage of Mario’s wrestling matches (he plays Kace), is interesting as he takes down one after another opponent. He was perfect in his matches, having never lost one.

The film does include some name calling such as “buffoon” and “idiot,” and mild language with “D,” “H,” as well as beer and wine drinking. However, it also focuses on the importance of family and includes the line, “Loyalty is the most important word in the dictionary.” It also features Christmas songs, including “We Wish You a Merry Christmas.”  Therefore, it has earned our Dove seal for Ages 12+.

This quirky movie will remind the viewer that loyalty to family is a very important virtue.

Some Christmas songs such as “Joy to the world.”

A family is loyal to one another as the dad teaches his son how to wrestle.

OMG/O/G; “What in G’s name?”; H; D; Da*mit; name calling such as buffoon, idiot, fool, dummy; dumbbell; crappy; some swear words are beeped out; Shut up

A brief scene from a movie with a woman cutting up a mannequin with an ax; people wrestle one another to catch a criminal.

Scenes of drinking with wine and beer; comment about getting a brew.

A doctor is asked, “Is there a God?” to which he replies, “I still can’t tell.” The mention of sports gambling.