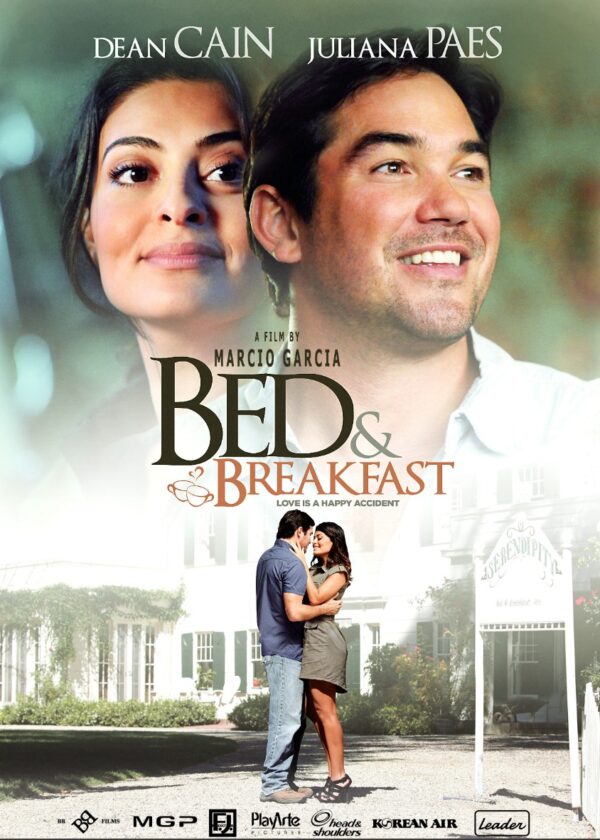 Jake’s as good as divorced. He opens a B&B in the California wine district. Meanwhile, hardworking, cute, unwed Ana in Rio inherits debt and that property and must sell so she travels to the B&B.

Bed and Breakfast features some likable actors, Dean Cain as Jake Sullivan, and Juliana Paes as Ana Vilanova. These two could be models. They have the looks for sure. The plot centers around Sullivan, who wants to start a bed and breakfast. His wife, an actress, has left and they are finalizing a divorce. Meanwhile, the lady who left him the house, Florence, is the grandmother to Ana, who inherits the house without knowing anything about Jake. Ana successfully works in retail in Brazil She contacts Jake online, and he doesn’t take the news well. He’s been working hard to get the bed and breakfast up and running. In fact, his reply to her is a nude photo of his rear!

Ana travels to Webster, Calif., wine country and where Jake is located, to try to secure the house. She takes along her attorney, Victor. Jake is not too pleased when she arrives, especially since he had a couple of early birds that have rented rooms from him in the new bed and breakfast. He wasn’t ready to open, but he does open early, so as to accommodate them.

Jake’s brother, Pete (Bill Engvall), the local sheriff, adds some comedy. When he walks in and sees Jake has just lit the fireplace, he says, “Nothing says ‘summer’ like a nice, hot fire!” And later, he reminds Jake once again it’s summer when Jake places a blanket on his dozy brother on the couch. Pete means well but doesn’t always truly help his brother. Pete tells one lady he will let her out of a parking ticket if she goes out with Jake. Jake replies, “I’m not even divorced yet!”

Ana has learned that her father, who died from a heart attack, has left her a lot of debt, which is another reason she hopes to sell the bed and breakfast, which, unfortunately, Jake has staked his plans on. Jake is still working out the bugs of his bed and breakfast, after being told the TV has one channel, which is static, with no cold water in the shower, and with no hot water in the sink. And there is a large hole where a toilet should be!

However, despite their early hostility toward one another, Jake notices Ana’s beauty and compliments her on it. And Ana’s attorney friend and Jake’s housekeeper hit it off! In fact, romance looks as if it is blooming between Jake and Ana, who, despite themselves, are attracted to one another. Once it’s decided in favor of Ana, Jake asks if she could rent the place to him, but she says she badly needs the money.

In one tongue-in-cheek scene, actor Eric Roberts plays a reviewer of bed and breakfasts and of fine food. Jake opens up to him that Jake’s wife is an actress, but “she’s no Julia Roberts!” which is funny because Julia Roberts brother is Eric, the man playing the food critic!

Ana and Jake wind up stranded together in his truck, and sleep in the back in a sleeping blanket. Ana and Jake seem to be about to become romantically involved but then Jake’s ex wife shows up. But why is she there? Is she trying to improve her public image, which took a hit when people learned of her impending divorce? In a funny scene she calls the dog Nick, and Jake reminds her the dog’s name is Kevin. Ana found a sign downtown that she wants to use for Jake’s bed and breakfast: “Serendipity” (a happy accident). Was it a happy accident that she and Jake were thrown together? And will his divorce be finalized?

We won’t give the ending away. There are likable moments in this film, but it also features some strong language, including the Lord’s name in vain, as well as the rear nudity. It is definitely a romantic film, but not strongly family oriented. Therefore, it falls short of earning our Dove seal.

Although an interesting romantic film, this movie falls short in the wholesome and family friendly category.

Man and woman work out their differences with civility; two brothers are loyal to one another; man opens up his bed and breakfast early to accommodate guests.

Kissing between a few couples; a honeymoon couple kiss a lot and make over one another; it is hinted that an unmarried couple slept together; a couple is shown waking up in the back of a truck although no scene of them having sex is shown.