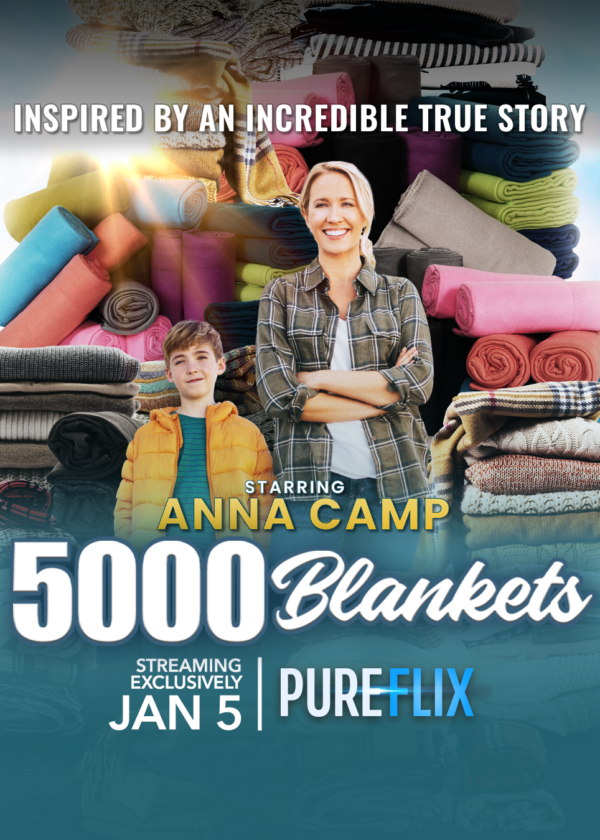 Bobby Saunders is a young professional with friends and a wife, Cyndi, and son, Phillip, who love him. As he goes about his daily life, which includes being a believer and attending church, he begins to suffer from mental episodes where he’s angry and suicidal, leading to a life-or-death moment on top of a tall building. Driven mad, he suddenly disappears from his family’s life, vanishing into the streets of a big city. Fearful whether he’s dead or alive and not knowing how to help him, Cyndi and Phillip begin to comb the areas where the homeless gather for traces of the man they loved. In the process, they encounter some homeless people who confront their apathy toward their plight. Cyndi and Phillip’s hearts begin to turn toward them, and they ask what they can do to help the community. Soon, they begin a ministry delivering items to the homeless population, especially blankets for the cold nights, still searching for signs of Bobby.

The origin of the real-life ministry to the homeless, Phillip’s Wish, is explored in the new Pure Flix drama, 5000 Blankets. After Bobby Saunders suffers a debilitating mental illness, causing a suicide attempt, he disappears completely from his family’s life. His wife Cyndi and son Phillip are left devastated and begin a hopeful search to find him living among the homeless. They themselves also lose their home as past-due bills that Bobby had neglected force them to move in with Grandma.

Searching for Bobby, they encounter the humanity of the community members, who at first are either indifferent or downright hostile to them. Soon, however, they befriend them and seek to find out what they could do to help alleviate their suffering. Cyndi and Phillip begin collecting blankets and other household items, still hoping to be reunited with Bobby before they lose him completely. Cyndi and Phillip’s new ministry could literally have saved thousands of lives as the temperatures began dropping in the Fort Worth area during the winter.

5000 Blankets is well-rooted in Christian faith, with the family being regular members of a local church. Hymns and sermons give comfort and direction. After Bobby’s disappearance, Cyndi and Phillip are propped up by their fellow members and spiritual leaders. Their pastor also shows concern and helps them, even when Cyndi begins to start emotionally shutting down and doubts her faith.

“It doesn’t always make sense, the plan,” the pastor tells her. “Even hearing someone talk about the plan feels like the twisting of a knife. Nobody, least of all Him, wants to see you drift. So just keep your heart open, Cyndi. Listen, look. Be ready for the call when it comes.”

While working in their new homeless helping endeavor, the compassion of Christ compels them to minister to “the least of these” even amidst their own heartache. This gives them a renewed zeal and sense of purpose, but they also continue to deal with their personal problems – Cyndi trying to hold down a job for the first time in years and Phillip navigating the jungle of elementary school social dynamics. The ministry also is dealt several blows, including political red tape and a fire that destroys a storage unit full of blankets. Once again hit with despair and overwhelming doubt, it’s Phillip who steps forward to tell his mother, “We can’t give up.”

While there are moments of great intensity, including a rooftop scene where Bobby threatens to jump to his death in front of his wife and a friend, the film is a good discussion point for families who may be dealing with their own challenges, which could involve suicide or abandonment. What could someone do to make someone else’s burden just a little bit lighter? Can someone move past their own hurt to minister to the needs of others? If so, how would that help heal their own hurts?

5000 Blankets and the story of Phillip’s Wish is an uplifting and hopeful film about ministering through brokenness and being sensitive to the needs of others. It’s an impactful story with great performances that will draw viewers to its transformational message.

The Saunders family is well-rooted in Christian faith and lean on God during their toughest times. They pray, attend church, and receive help from their fellow members and pastor.

Cyndi and Phillip are great examples of being servants and moving beyond their own issues to see those who are hurting in the world. The film takes viewers on a journey of them warming their hearts to the members of the homeless community.

One instance of the by-word “freaking” and words like “darn.”

The attempted suicide scene is perilous and intense. No one is ultimately hurt but suicide is a frequent theme. Cyndi is also called to the morgue to identify what she is afraid is Bobby’s corpse. Phillip is teased at school about his father and engages in a fistfight with the bully.