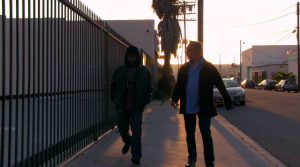 One day, one moment, one idea can change lives. Noah Davis is a pastor in an affluent community. Depressed after losing his wife to illness, he is contacted by an old friend who has opened a mission in a rough inner-city neighborhood. With Christmas approaching, he packs up and together with his two daughters, moves into Salvation Street Mission. Now the family must struggle with the challenges they face in the crime-ridden community. Noah's inspiration guides his daughters, the mission and the neighborhood by bringing them the greatest gift of all, hope.
Watch Trailer
Watch Trailer
6
Negative Rating
12345
SexLanguageViolenceDrugsNudityOther
9
Positive Rating
12345
FaithIntegrity

Christmas On Salvation Street is a must-see movie! It offers hope and convincingly demonstrates that miracles can still happen.

Pastor Noah (Joe Pacheco) has pastored a flourishing church for many years. The attendance is good, the choir is awesome, and he is well liked, along with his daughters Alexa (Catherine Lidstone) and Brianna (Olivia Rose Keegan). But his wife has passed away, and a young man he mentored as a boy, Charlie (Israel Matos), needs his help. He has started a mission in a tough part of town (the setting is California) and it needs a pastor. So Pastor Noah, believing God is calling, moves his family and sets up a home in the mission with the goal of reaching people, even gang members if they are willing to accept his invitation.

Pastor Noah meets an elderly lady named Ida (Reatha Grey) on his first Sunday as pastor, and she pleads with him to help reach her grandson Toby, who has been on the streets since he lost his mother. Pastor Noah finds that Toby has a tough veneer, believing he is fine hanging with his cousin Damian and his gang. But Noah is a man of faith and continues to pursue Toby, pleading with him to come live at the mission. Toby’s younger brother Dwayne moves in and he begins to work on Toby too. With all the problems of bringing the building up to code, Pastor Noah also encounters problems with his daughter, Alexa, who misses her friends—that is, until she helps a single mother and begins to find her niche.

Pastor Noah is an inspiration—a relentless man who doesn’t quit. He is tough and shows a gritty attitude while working in extremely difficult situations. He truly believes the Bible can change peoples’ lives. Joe Pacheco is excellent in his role as Pastor Noah, bringing a likability and “can-do” attitude to the part. His ultimate goal is to offer Dwayne and Toby a permanent home, along with anyone else that needs a home. He will have to cope with the state but he believes God is big enough to handle it.

This wonderful film is a remarkable, inspirational story that offers hope in the midst of one’s struggles. Due to a few scenes of violence, including a knife being pulled on a pastor, as well as a gun, we are awarding it our Dove Seal for Ages 12+.

Here is a movie with a great story that offers hope in God. It could be a life-changing experience to watch this film!

A strong faith message of God changing lives and a couple of awesome songs about Jesus.

There are characters who want to do the right thing and help others.

A man is almost electrocuted and exclaims, "Holy...!" but that is it, and he adds no other word.

A knife is pulled on pastor as well as a gun, but he is not harmed.

A few scenes in a liquor store/market

Tension between characters; a teen girl is disrespectful to her father but changes as the story unfolds; a few young men gamble on the street; death and grief; a couple of kids steal from a store, but the pastor makes them go back, give it back, and apologize.