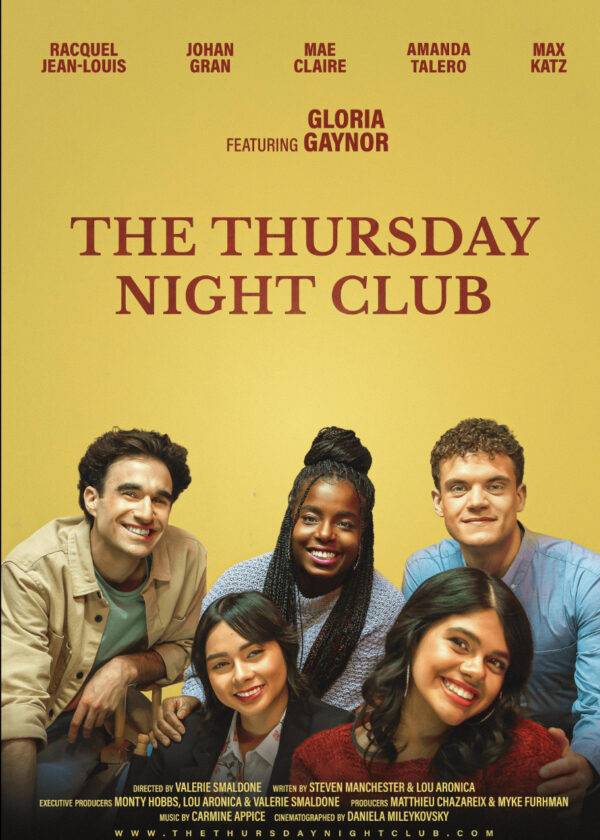 This nicely directed film has a good message, and that is the importance of being kind to one another. It features good and likeable actors as college students, who are challenged by the father of one of the students to watch for a “sign,” an opportunity, and then to commit an act of kindness.

Valerie Smaldone directs the cast, which features the characters of Jesse, Izzy, Ava, Kevin and Randy. Jesse’s dad meets this “Thursday Night Club” on a Friday, and challenges them to take an active role in lending a hand to others, and to be kind. He asks the question, “Are you open to it?”

When a wrong-way driver hits Jesse’s dad’s car, he is tragically killed, and his last remaining words to them haunt them all. Jesse heads home for a time, and the others carry on with their lives.

Ava visits a nursing home, and she hopes to help by sharing analytical skills and a computer program that can aid the residents, but a supervisor makes it clear that what they need is for people to spend time with the residents, who are lonely. On her way out the door Ava encounters a woman sitting by herself, who just simply wants some company. She makes the comment that it is a beautiful day, and she comments, “He’s always giving us signs of His love, isn’t He?” Ava sits down to talk with her, and she finds someone she will be visiting again soon. The elderly woman’s children have retired to Florida, leaving her alone.

Izzy, who has a dream of being an actress, is offered the opportunity to “sweep the floors” for a play, as the director tells her the lead roles are filled, but he says he loves her spirit. She soon learns that there is someone who needs a bone marrow donation, and she thinks this might be the Lord’s will to show an act of kindness. She jokes with a nurse that her mouth swab to see if she’s a match won’t “show my stage presence!”

Randy deals with his feelings about his dad, who was missing a lot of his life, as he was a baseball player. And he has thwarted Randy’s attempts to have a relationship with him.  And Kevin learns his dad has lost his job, and he won’t be able to pay for Kevin’s next semester of college. One of the strengths of this movie is its base in reality, as it shows characters who undergo real-life problems.

Another plus, in addition to the cast, is the music, which features some upbeat music about Jesus and his power to help us, and the power that came from the one who made the blind to see. And there are dashes of humor too. When Jesse tells of her love of puppies, and how she started a “Puppy Palooza” when she was a girl, she says when her dad would talk to her about helping the homeless when she was a girl, she would still talk about puppies!

In a touching scene, when Jesse says she grieved over the passing of the puppies, one by one, her dad reminded her they would always be with her, that the puppies had taken permanent residence in her heart.

This movie does a nice job in presenting the difficulties people face and wrestle with every day, such as grief, loneliness, and uncertainty. In a powerful scene, the Thursday Night Group are eating dinner, and they are all quiet, as they are all dealing with various struggles. Yet there are the comedic moments placed in various spots in the movie, to keep it from being a downer. In fact, it is the opposite, as it makes the point of the need for kindness and that the Lord will guide us. In another funny scene Izzy is concerned how giving the bone marrow donation will affect her, and she says to a nurse, “And you’re pretty sure one of my limbs isn’t going to fall off?” And Izzy gets to meet Cameron, the four-year-old girl she helped with her donation. She meets Cameron’s parents too.

The fact that everyone needs someone’s help is showcased when a Mr. Sweeney steps in to help Kevin with his idea to help others with scholarships. But Mr. Sweeney does something extraordinary for Kevin too. And the ending is amazing as the Thursday Night Club inspires something special to be done in the community.

This movie has earned our Dove seal for Ages, 12+ although it is not intended for young children, as it deals with some dramatic issues.

I wish there were movies out there like this one, which inspires acts of kindness and the importance of helping others.

Talk of God’s help and His guidance; songs that mention Jesus; comments about God’s beauty in the world.

Several characters help others, such as a girl visiting an elderly woman in a nursing home; and another girl donating bone marrow to help a young girl survive.

It’s stated a man was killed in an auto accident.

Characters feel tension and stress due to life problems.