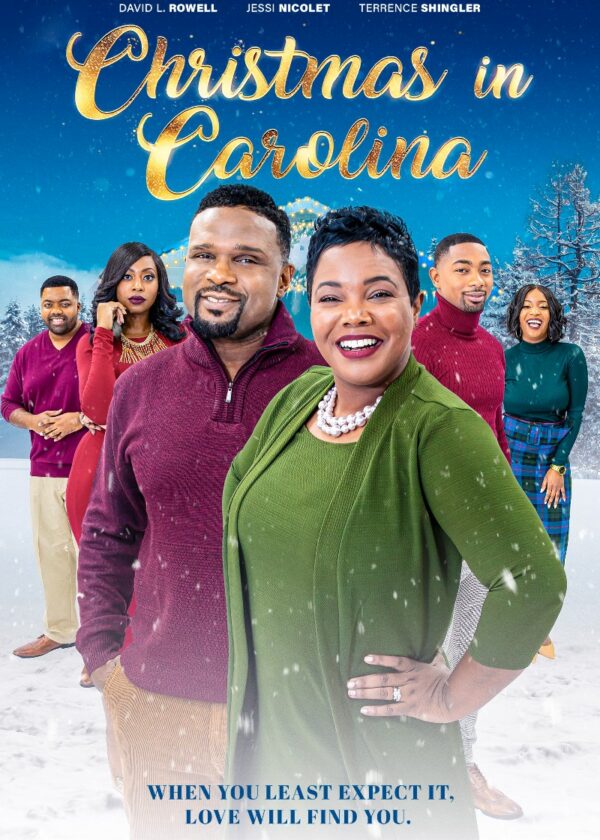 After losing her parents in a car accident, Elle, a career driven investment banker, has given up on love and Christmas until she meets Wesley, a former NBA player and CEO of a small marketing firm. Wesley invites Elle to his hometown in South Carolina, with hesitation she accepts and is thrown for a loop where she falls in love and finds the spirit of Christmas again.

Christmastime isn’t investment advisor Elle Moore’s (Joslyn Hall) favorite time of year, having lost her parents to a tragic car accident the year before. With her only sister inconveniently located in the UK, and sole cousin, Blythe (Jessi Nicolet), traveling away for Christmas, she plans to saturate herself with work until the consuming holidays are behind her. Blythe has a different idea for her cousin and is thrilled to fix up Elle with another blind date- for the 15th time. Since Cousin Blythe doesn’t know ‘no’, Elle grumbles and gets on with it. To her annoyance, her blind date Wesley (David Rowell) saunters in late. Now Elle just hates when the date is late! But something about him holds her in her scrutinizing seat.

Quickly, things get somewhat irritating when her rudeness is returned with a beautiful red rose. That is, irritating to Elle, since shoo shooing this one isn’t as easy. She has to work, work, work and doesn’t need an attractive, patient, considerate man to hang around. She smoothly ends their date, blaming work. Later, admitting to Blythe there might be a tiny interest on her part, she finds herself challenged when she and Blythe spot Wesley at a restaurant. She garners the gumption to cross the room to say hello, even though he is having lunch with a pretty, middle-aged lady. Not to worry! It’s his mom, Charlotte (Kellie Williams), visiting from South Carolina.

Charlotte, aka Mrs. Claus, loves and adores the Christmas season and all that goes with it. She has made sure Wesley will be traveling back with her to South Carolina to satisfy her Christmas family requirements. Soon, after falling for Elle, Wesley invites her to spend Christmas with his family in South Carolina. She accepts and their affection for each other blooms like a Carolina Christmas lily. Too bad Wesley’s brother Ryan (Terrence Shingler) lurks around Elle and causticly warns Wesley that she hides an erosive secret. Ryan’s accusations are a mystery, and naturally a threat to Elle and Wesley’s relationship. Elle is thrown into pensive thought- will she leave now? Or will she confront this sticky situation?

Christmas in Carolina is a sweet, but secular romance wrapped up in Christmas paper. A church Christmas program and sermon erroneously tell us that Christmas is about a couple (Joseph and Mary) breaking through complications, as well as Jesus coming amid complications, and love breaking through. What the jingle bells does that mean? Structurally there are a few weaknesses in the script in which a scene is set up, but never happens. Filler footage is over played. ’Set dec” is sparse on the walls and brings attention to insufficient decor. Volume and sound are tenuous at times, and there are few scenes where the acting could be smoother. But humor can fix many things and Joslyn Hall and Jessi Nicolet have that gift. Elle’s narrative at the end of the film reminds us that love conquers all, as it has in her life.

To note, David Rowell does a super job creating the compassionate role of Wesley, who influences relationships by forgiving others. Alcohol-wise, the drinking in this film suggests fine living, not drunkenness. Noting that some parental discussion about the true meaning of Christmas is encouraged, Dove awards Christmas in Carolina the All Ages Seal of Approval.

Church Christmas program is seen in a positive light. One mention of Jesus.

The main characters are honest, caring and seek a healthy relationship.

Adults drink champagne, a few scenes happen at a bar, no drunkeness.

Production quality is inconsistent, but is predominantly good.