The End of Days: Global Catastrophe 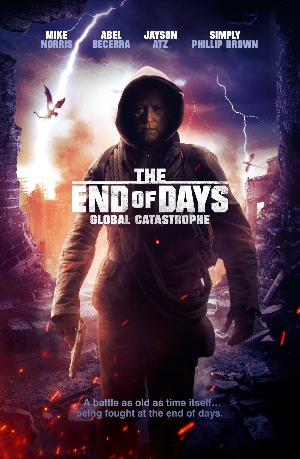 Hunter Wilde is the leader of a group of Christian survivalists who are trying to live as normal as possible two years after an EMP (electromagnetic pulse) attack. In a world of chaos, living day to day has become more treacherous. But that is nothing compared to when the gates of Hell are opened up, and demons are commissioned to seek and destroy the remaining believers on Earth. Their targets are set on Hunter. If they can break him, the whole town of Crossroads will follow.

An electromagnetic pulse attack has turned the world into something straight out of The Walking Dead, except that instead of zombies prowling the streets and woods, spiritual warfare has broken out. Chuck Norris’s son, Mike, narrates as the title character, Hunter Wilde, and says, “It feels like God left the gates of Hell open.” Everyday supplies are scarce, and safety is found in compounds inside of which fences and armed survivors keep at bay encroaching evil. Outside the compounds, survivors fear to tread alone. Even with that, those who remain, wonder aloud, “You think death is better than this?”

In this dystopia, where even the scowling pastor provides little hope and wonders why God didn’t rapture them out, Wilde is the big prize. Demonic forces pick off as many as they can, but they seem to concentrate much of their efforts on Wilde, believing that if they can cause him to renounce his faith in Jesus that they can overrun the Crossroads compound that he leads. Much of the movie spends time showing Wilde fending off evil forces, apparently from Hell—the lighting and background noises of weeping and wailing seem to point to as much.

But as the warfare intensifies, so does Wilde’s resolve. Sometimes it’s difficult to keep up with exactly where he is because he is shown fighting in the spirit world while his body writhes in the physical world. His Ephesians-quoting daughter Jo wonders if her father is going mad. He fights the good fight, concluding that, “Our Lord is faithful and will protect us as we authentically follow Him.”

Some of the depictions of demonic forces and mutants might be a bit scary for little ones, but the message that victory comes through Jesus is impossible to miss.