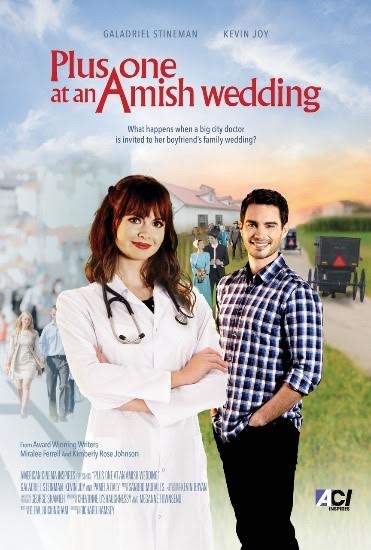 Plus One at an Amish Wedding

Up-and-coming superstar Dr. April Monroe has the perfect life. She works at a prestigious hospital in New York and has recently met Jesse Hardin, a handsome veterinarian.  When a family wedding brings April to Jesse’s childhood home and meeting the family, April is in for a surprise when Jesse’s family is not receptive to this stranger.

A complex script and great onscreen chemistry among the cast will hold your interest as April and Jesse meet over an exact same order at the coffee shop causing little sparks to fly in all directions!  An adorable romance movie with a look into the gentle (and stubborn) Amish way of life, suitable for your entire family … little ones to grandparents.  Dove-approved for all ages!

Dr. April Monroe (Galadriel Stineman) has a successful career at a prestigious New York hospital and is leading an idyllic life.  An accidental meeting between April and the handsome Veterinarian Dr. Jesse Hardin (Kevin Joy) immediately sends Cupid into a tizzy as the two instantly connect.

April is constantly being scolded by the head doctor, for taking too much time with patients reminding her there is “a quota to fill.”  April defends her actions saying she can treat her patients more effectively if she gets to know them and they appreciate that she does.  She confides in her sister May (Mary McElree) with her doubts as to whether she really belongs at this hospital…

As April and Jesse spend time together, it’s obvious this relationship was meant to be, and a six-month surprise anniversary gift of a trip to Paris just adds to the excitement of their love for each other.  But when an unexpected family wedding is announced and must take precedence, April is equally thrilled in finally being able to meet Jesse’s family that she knows nothing about.  April is curious as to why Jessie has never talked openly about his family and May cautions her, there may be a reason he is not opening up…

When Jesse finally breaks the news he is Amish, April is surprised but agrees to attend the family wedding. As Jesse gently informs April of Amish customs, meeting his family and mother further reveals some harsh realities.  April is clearly a stranger and Mother will not have any part of welcoming her.

Amish family dynamics dominate the second half of the film as Jesse navigates through the rigidness of his mother’s ways, but a letter from his late father softens the harshness and a mother’s love prevails.  When Jesse proposes, April is delighted but…. on one condition… that which leads to the best of both worlds!  Sweetest ending!

Deeply rooted family expectations can overrule the dreams and aspirations of adult children, but parents must trust that lifestyle choices are as individual as each child is unique.  Letting go is not easy but can strengthen the family unit instead of driving it apart.

April’s kind heart makes her a superstar doctor whom her patients adore; Jesse’s mother apologizes for the pain she caused her son and asks for forgiveness; Jesse forgives his mother;  the Amish are caring and look after each other and the community; an Amish woman acknowledges that April saved her life and is regretful of her unkind words

Champagne toasts at an anniversary celebration; wine with friends