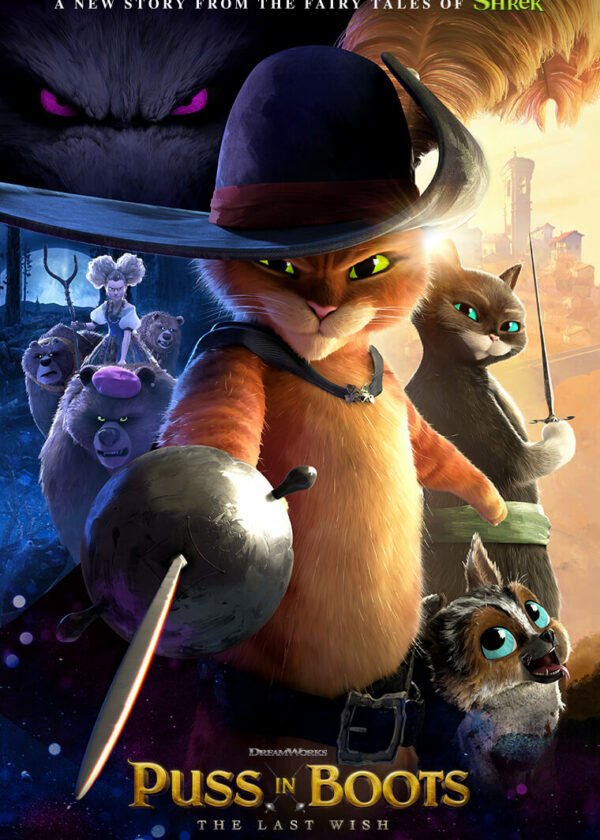 Puss in Boots: The Last Wish

The comedic swashbuckling feline from Shrek returns in “Puss in Boots: The Last Wish,” the sequel to his 2011 solo adventure. The film opens with the hero saving a village from a giant monster and suddenly being killed by a flying church bell. When he awakens, he’s told the life he just lost was his 8th and he’s now on his last. Rattled with a new deep fear of death, he disappears into a cat rescue house but soon learns about a magical Wishing Star that could give him back some of his lives. Paired with a new dog friend, Perrito, and a romantic interest, Kitty, he races to find the star dodging attacks from others seeking their wish, including Goldilocks and the Three Bears, and Big Jack Horner and the Baker’s Dozen.

Puss in Boots is a legendary protagonist . . . until he learns he’s living his very last life. A dark, terrifying wolf bounty hunter corners and nearly bests him, prompting the hero to run and hide at a cat shelter with dozens of others. He buries his hat, boots, belt, and sword, grows a beard, and becomes a recluse. The criminal gang of Goldilocks and the Three Bears barge into the house and begin harassing the animals looking for Puss in Boots, who they believe can help them steal a treasure map from Big Jack Horner that holds the location of a magical Wishing Star.

Priding himself on being a lone hero, Puss in Boots reluctantly begins a quest with an unshakable dog friend, Perrito, in tow to find the map and extend his life. Along the way, he also reunites with a longtime female friend, Kitty, and becomes the target of Big Jack Horner and his Baker’s Dozen of mercenaries as well as Goldilocks and company. Like the Easter eggs found in “Shrek,” there are numerous references and homages to fairy tales and fantasy films, especially in Big Jack’s collection of artifacts, such as Beast’s rose under glass, Cinderella’s glass slipper, Aladdin’s magic carpet, and Jafar’s staff. The map’s path forward changes according to who holds it so the most innocent of the bunch, Perrito, is charged to keep it before he is captured by Jack and his friends have to save him.

The main lesson for Puss in Boots is about community and caring for others, as well as making the most out of life. Kitty and Perrito are sad as Puss seems to continue making decisions that benefit himself above others, like choosing to save the map over his friends. Although she likes Puss, Kitty is still wounded from him abandoning her at the altar years before. Can she trust him again? Ultimately, Puss confides to her and Perrito the true nature of the wolf and his fear of Death. In a final act of courage, he decides to face that fear head on, and seeing how he has changed, Death chooses to leave him alone. For now.

The look of “The Last Wish” is impressive, taking a lot of its anime-style inspiration from Sony’s successful “Spider-Man: Into the SpiderVerse” and DreamWorks’ “The Bad Guys.” It’s not only practical but artistic in many instances. There are creative and impressive action sequences which will thrill family audiences, along with clever humorous bits that kids and adults will love. Puss is simultaneously fearless and hilarious, especially when something knocks him around and the cat’s screeching sound effects are heard. There is also some rude humor and minor language (“What the h-ll…”), but it’s minor and could easily be overlooked.

Younger viewers will look up to Puss in Boots as a model hero, and hopefully learn that it’s better to bring friends alongside them in their own journey. They might also pick up on his courage and ask themselves if there are friends that they might have mistreated and need to reconcile with. Am I making decisions that only benefit me or do I look out for the needs of others?

At first glance, “Puss in Boots: The Last Wish,” a long-awaited sequel, might have seemed destined for streaming or a home video release, but the creators of this film take the creature and the “Shrek” franchise to an exciting new level with cutting-edge animation, a captivating, endearing story, and hilarious performances by Antonio Banderas, Selma Hayek, and Harvey Guillén. It’s easily one of the top family releases of the year.

Bravery and courage are constant themes through the film, as well as selfless love and friendship.

Puss in Boots is a hero throughout the film but begins to learn the value of friendship and loving others, even those who are selfishly trying to take what he wants. He also learns to be brave.

A few utterances of mild crude language including “What the h-ll.”

Puss in Boots and other characters engage in frequent comic combat including weapons, but no one is killed by each other’s hands.

Puss in Boots appears to be drinking in a bar, but his cup is full of milk.