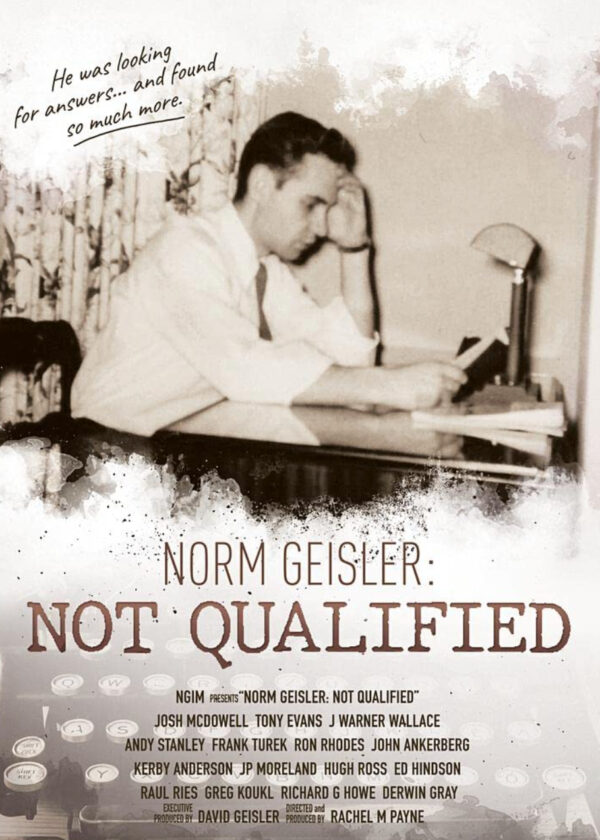 A boy from the farmlands near Detroit becomes a world wide leader who affects the Christian faith in a mighty way.

This fascinating documentary packs a lot into its 63-minute runtime. It focuses on Norm Geisler, who passed away just a few years ago, and who impacted the Christian world by attempting to answer the difficult questions that people have about Christianity. Going beyond apologetics, Norm challenged people to look into philosophy to better understand one’s questions, and to come to the realization that God’s word, and God Himself, can be trusted.

Norm was one of the least likely people for God to use, but He did. The title of this documentary reflects this fact. Norm couldn’t read until the eleventh grade in school, but he was blessed with an almost photographic memory, and could amazingly quote page numbers from books! His parents were not believers and when Norm became a Christian his mother threatened to hit him with the fireplace poker!

The documentary features many brief clips of people whom Norm has influenced, such as Josh McDowell, John Ankerberg, and Kent Suter, a youth pastor, who says, “Dr. Geisler always gives credit to the Lord.” Josh McDowell comments that spending just eight or nine minutes with Norm changed his life for years. The documentary also features clips of the sixties, with the Beatles, the social upheaval, the Klu Klux Klan, Viet Nam, the Beatles, and President Nixon and the Watergate scandal in the early 70s.

Dr. Geisler emerged as a man who turned people’s attention to the revelation of God’s word, and to faith and reason. “The Bible doesn’t have any mistakes,” he said. He points out the multitude of accurate Bible manuscripts, numbering 5,686! Dr. Ed Hindson says, “Norm’s anchor was in scripture.”

Keeping a sense of humor was part of Norm Geisler’s life. He said a man who had been drinking once was not happy with him, and he told Norm that he was part of Moody Instit of Bible toot!” (Moody Bible Institute?!) And when Norm was invited to speak at a Rick Warren Bible conference, Norm tells the congregation that Rick wanted to invite the brightest minds of the country to the conference, but they couldn’t make it, so “Here I am!” His self-deprecating sense of humor spread a lot of laughter.

Norm studied for many, many years, and earned various degrees. He attended Bible college, and went to school for 20 years, earning two Bachelor degrees, one Master’s degree, the equivalent of another Master’s degree, and a Ph.D in Philosophy. He finished his Ph.D at age 39! The once illiterate man came to read thousands of books and to author over a hundred books. In fact, one he co-authored with William E. Nix was titled “A General Introduction to the Bible” and it found a very interested audience. Norm was instrumental in founding the International Council on Biblical Inerrancy, which focused on three things: 1. Biblical inerrancy, and 2. Interpretation, and 3. Application.

One of his legacies is that he has re-produced himself, his teaching, and his convictions, to many others who lead in ministry to this day. He overcame sorrow and tragedy, in dealing with the suicide of his daughter. And, as Dr. Ron Rhodes says, “Norm was available when God called him.”

The documentary features a scene of marijuana smoking from the sixties, as well as other mature themes, but presents the biography of a man of God, Norm Geisler. The film has earned our Dove seal for Ages 12+ although parents should consult our content listing. Some parents may be fine with their kids a bit under 12 watching this film about an amazing man. One of his great quotes is, “Love is persuasive but never coercive.”

This remarkable documentary showcases the life of a man who wanted to point people to God and the Bible.

Several comments about the Bible being inerrant and the word of God, and Jesus Christ being the Son of God.

Dr. Geisler and others search diligently and ask questions and in their exhaustive studies reach the conclusion that the Bible is God’s word; Dr. Geisler is presented as a humble man who cared about others and took time with others.

A brief clip where a woman in the sixties shakes her rear.

A clip in which a couple of people in the sixties smoke marijuana; a clip of people with drinks.